"Inspiration is being in a dark room and then you light a candle... all of a sudden, enlightenment is invited in."

Hello everybody! I just wanted to take the time to let you all know about another online partner that we just added to our Christian Network Section. As always, I'm excited to have the honor and privilege to be able to partner up with another great Christian website. The name of this Christian website is called: 21st Century Christianity.

I have to admit with all the studying and research that I do, there are times when things just become routine. And to be honest, this was the state of mind that I was in when I received the invitation to go and check out: 21st Century Christianity. 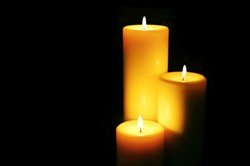 So when I'd first arrived at the website, I started to do my regular routine of just skimming through the content, as I evaluated the overall look of the site.

As a matter of fact, I had already looked at it once very briefly, when I'd first got the invite, then I put it off to the side.

I was working on a new Bible study article at the time, in which I was trying to focus on so that I could it posted within a timely manner. Needless to say, I was able to get the article done and posted, and soon after, I was checking my emails. There was nothing that had caught my eye, nothing special, just another typical day. "How did they get my email address?" I would ask myself as I looked at some of them.

Then I notice the invite that I had received for the 21st Century Christianity website. And it was during this time, I'd decided to go and take another look. And just like before, I began my normal routine, when it came to quickly skimming through the content and evaluating the overall site. But something was different this time around. It wasn't anything new that they had done, it was something that I had missed before.

So I'd found myself reading from within their Courage Corner Section.  And as I was reading a page that was called: Guts & Heart. I'd came across a very inspiring story that dealt with Dick & Rick Hoyt. Here we have a story that is about a father and his son that has cerebral palsy. I'd also read how Dick would eventually form a team with his son, in which they called themselves: Team Hoyt.

As a team they would participate in running contests that included - 229 Triathlons, which included 6 Iron Man competitions, 20 Decathlons, 66 Marathons, which also included, 26 Boston Marathons.

Now I'm not going to tell the whole entire story here, so you'll have to stop by their site and read it for yourself, but I must admit I was moved. Be that as it may, I'd kept reading. And it would be during this time, I found out that the next story was just as inspiring, if not more, than the first... and the next, and the next. Well let's just say, they all were real tearjerkers.

Then it hit me, this was a beautiful site that provided priceless inspiration in a very subtle and powerful way. This would become more apparent to me as I began to explore the entire website. I'd stop by their Great Inspirations Section and found more wonderful pages of hidden treasures. These pages are called - Overwhelmed, The Carpenter and three 'Magic Minute' pages that I must admit, provided genuine magic moments for me personally.

I wonder... have you ever been from Here to Eternity? Well, if we were to have that experience, I wonder if most of us would accept and embrace what we just observed. I wonder if our own limited perceptions would allow us to understand the awesomeness that we were finding ourselves experiencing at that moment?

Now I'll would like to point out, 21st Century Christianity shares some of their interesting perspectives, within their own Here to Eternity Section. So make sure you swing by and read what they have to say. Now this Christian website at the time of this writing is very new and I see a tremendous upside when it comes to them. I'm glad I went back and took a second look, for I was reminded on why we make sacrifices and press ourselves hard, when it comes to doing the work that God has created us for.

Today was a good one for me, for I found a wonderful path of gold nuggets that were wonderfully laid out in this very pleasant and inspiring Christian website. Thank you '21st Century Christianity' and keep up the good work.