Unlocking the Mysteries of the Bible

Don't just settle for basic combinations when it comes to the letters that are found throughout the Bible. Look to be challenged mentally. Know that Chuck Missler has written a book that not only deals with natural science and the structure of the universe, but the book also deals with the nature of our Heavenly Father, and God's plan when it comes to the purpose that He has for us all. 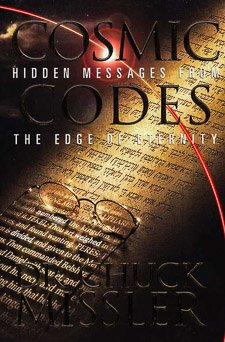 And even though Missler do set out to deal with his many skeptics, be assured, that he also puts forth a great effort, when it comes to touching on the importance, and the design, that both the Greek and Hebrew languages presents.

And not only that, Missler also unveils many of God's signatures that are found from within the Bible as well. He does this while also showing, how Bible codes are fashioned.

So my question to you would be: How far are you willing to go, when it comes to your Biblical studies?

Are you willing to explore the many mysteries that are found from within the Sacred Record?

If so, may I suggest that you prepare yourself to go beyond the surface of the text. And while you're doing so, also be prepared to gain a much deeper understanding of God's Word, and the master plan that He has for us all.

Setting the Record Straight about the End Times

First off, this is a book that was written by Mark Hitchcock and Thomas Ice. Now I also would like to point out, that Mr. Hitchcock is considered to be one of the worlds leading Bible prophecy experts; while Mr. Ice is the Associate Professor of Religion at one of the largest, nonprofit, private universities from within the United States that's known as Liberty University. Understand that this book is a follow up rebuttal to one of Hank Hanegraff's books, that's known as the The Apocalypse Code. 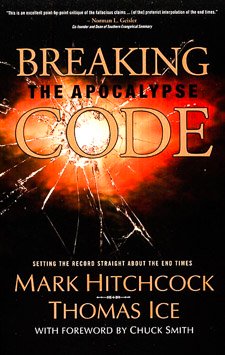 And it's for this reason, it's probably best, that you should first read Hank Hanegraaff's work (The Apocalypse Code) as well.

I'm suggesting that you do this, so this way you can get a better grasp and feel, when it comes to the follow up rebuttal that had been put forth by Mr. Hitchcock and Mr. Ice.

Now some may say, that Hitchcock and Ice do a very good job of using a biblical perspective, and a very comprehensible approach, when it comes to presenting their side of the argument.

While others also point out, that they have taken the extra steps that are needed, in regards to using the Sacred Record (God's Word) from within its entirety, when it comes to backing up their viewpoints.

Let me ask you this: Have you ever wondered if the Antichrist would be killed? Are you curious about the fate of Israel today? What about Moses and Elijah, will they appear in the end times? Perhaps you're also wondering about the true identity of Babylon the great? If these things are on your mind, then may I suggest, you add this Bible Code book to your must read list.

Now as the debate rages on when it comes to Dispensationalism and Preterism -- from within the midst of that debate, there is, what some would consider a controversial book that's known as -- The Apocalypse Code: Find out What the Bible Really Says about the End Times and Why It Matters Today. Now this is a book that was written by world renowned Christian author and apologist Hank Hanegraaff (a.k.a : The Bible Answer Man) But Hanegraaff wouldn't go at this alone, for we also find, that he teams up with well known evangelical author Sigmund Brouwer. 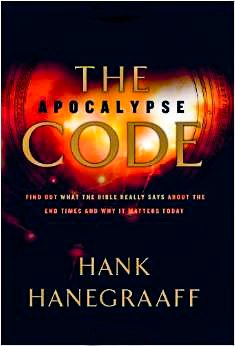 Now this wouldn't be the first project that these two have done together, for they have also written and worked together on another somewhat controversial project that was known as: The Last Disciple Series.

However, we find that many would say that their latest work: The Apocalypse Code -- gives the reader some solid teaching, when it comes to the subject that deals with End Times eschatology.

Others have also pointed out, that Hanegraaff and Brouwer does this while providing one with valuable principles in regards to Biblical hermeneutics.

Now Hanegraaff, who's arguably, the world's foremost amillennialist and partial preterist, takes direct aim at the Dispensationalist and their popular premillennialism viewpoint, when it comes to his quest for what he considers the Biblical truth.

For he believes that this is a Truth, that's hidden behind the prophecies, that are found throughout the book of Revelation. And actually, Hanegraaff takes a very bold approach to this topic. So much so, to where some may say, that he seemed to be arrogant, and a bit too harsh, when it comes to his tone and argument from within the book. And perhaps, this is one of the reasons, why The Apocalypse Code is often criticized.

Tim Lahaye the author of the famous Left Behind Series; and Mark Hitchcock and Thomas Ice, the authors of their follow up rebuttal: Breaking the Apocalypse Code: Setting the Record Straight about the End Times; is perhaps the book's biggest critics.

So if you're courageous enough to get in the midst of this controversial subject, and betwix these well respected men and their valued opinions, as you brave both sides of their arguments -- then it's my opinion, that you make the decision to pick up Hank's Apocalypse Bible Code book.

Many are saying that R. Edwin Sherman and Dr. Nathan Jacobi have put together a well researched book when it comes to the Bible Code Bombshell. Now when it comes to Mr. Sherman, not only is he the President of the Isaac Newton Bible Code Research Society, but he is also considered to be, in his own right, a world renowned mathematician. And when it comes to Dr. Jacobi, not only is he a well respected Israeli physicist, but he is also a Hebrew & English Interpreter, and what many would consider a Bible code expert. 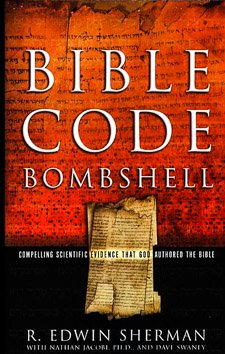 Now it's be told, that the Bible Code Bombshell is a book that was written, in order to expose what Sherman and Jacobi would consider false claims, when it comes to the numerous Scripture codes that are found throughout the Hebrew Old Testament.

For you see, Sherman and Jacobi sets out to test, if there really are hidden words and messages, that are found throughout the Holy Scriptures.

And if they are, then why are they there, and what's their true purpose?

And actually, some would say, that Sherman and Jacobi has done a fantastic job of providing the reader with plenty of evidence that supports their argument.

And not only that, their argument is presented with a very informative format that's again, surprisingly well researched and even amusing at times. Know that Sherman and Jacobi don't stop there; for some are claiming, that they have taken things to another level, when it comes to the subject of Bible codes. For they don't just point out codes that are just one, or two words long (like most have done) but what they have also done, is present the reader with codes that are elongated from within their proper context. Now don't worry, Sherman and Jacobi's approach, is done in a good and comprehensive way. So therefore, their work is not too complicated to understand.

For you see, the codes that are revealed from within Bible Code Bombshell, are so in depth, that it would be near impossible for a critic to chalk them up, as to being a mere coincidence, or something that has just simply happened by chance. I also want to point out, that from within Sherman and Jacobi's book, you'll also learn about the Isaiah 53 cluster that deals with Jesus Christ. Know that Sherman uses this chapter, when it comes to answering the Bible code skeptics. Also, you'll see why Ezekiel 37 plays a very important rule, when it comes to their research as well.

Bible Code Bombshell presents the reader with over 300 Bible codes that point directly to Jesus Christ. And actually, if you would like to go further when it comes to the subject that deals with Bible codes, then perhaps you should check out Sherman's website when you get a chance:

I'll tell you this, if you're fascinated by this very intriguing subject, then you won't be disappointed, when it comes to what he has to offer.

You Can Find These Bible Code Books At :