Samson the Judge of Israel


Samson the Judge of Israel


The Idea Behind it:

This illustration deals with the recorded account of Samson, the twelfth judge of Israel. Know that Samson's name means: "little sun." He was born in the city of Zorah, which was located between Dan and Judah.

His father was Manoah, and his mother is unnamed; but the Scriptures inform us, that at one point in time, she was barren. And so therefore, she couldn't bear kids on her own.

Samson's mother was visited by an angel, who told her that although she was barren, she would conceive, and bear herself a son. 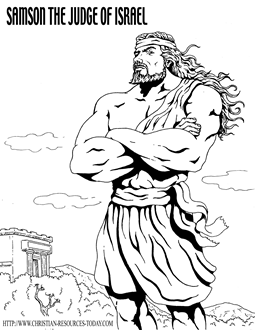 Understand that the angel's foretelling, when it came to childbirth; would place Samson's mother from within an elite group of women, who themselves, also had a foretelling, when it came to them being able to bear kids. This group of women would include, but not limited to: Issac's mother Sarah, Elisabeth, the mother of John the Baptist, and Mary, the mother of our blessed Savior Jesus Christ.

Nonetheless, Samson's mother was instructed not to drink wine, or any type of strong drink. She was also instructed, not to eat anything unclean. When it came to Samson, she was instructed not to cut his hair, and was informed, that he would be a Nazarite from birth. Keep in mind, that the angel's emphasis on Samson being a Nazarite, would let Samson's mother know, that he must keep the Nazarites vow, from day one.

The Idea Behind it:

This illustration is based off the recorded account that deals with the very popular Samson. Know that Samson would become Israel's twelfth and final Judge that's listed from within the Book of Judges, in which he'd served for 20 peaceful years.

But also keep in mind, that there are two more unofficial Israel judges, that are not mention from within the Book of Judges. And those two are Eli and the prophet Samuel. Now I stated they were unofficial, because it depends on who you ask. But the Word of God clearly states that they were indeed judges: 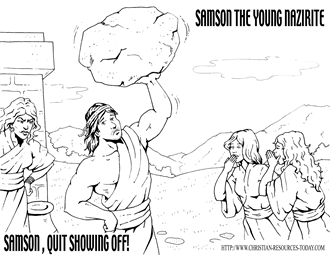 "Samuel continued as judge over Israel all the days of his life." -- I Samuel 7:15

"Then it happened, when he made mention of the ark of God, that Eli fell off the seat backward by the side of the gate; and his neck was broken and he died, for the man was old and heavy. And he had judged Israel forty years." -- 1 Samuel 4:18

Samson was a Nazirite who was born at a town that was known as Zorah. Samson was perhaps the most famous, from out of Israel's fourteen Judges? And actually, personally, I would give him a slight nod over Gideon (Israel's fifth Judge) and the prophet Samuel (Israel's fourteenth Judge)

And although Samson had many accomplishments, he was known to have a weakness for beautiful women. The most famous account would be his downfall, that came by the hands of a woman named Delilah. This account can be found at Judges 16:4-31

Be that as it may, this page deals with a lighthearted scene, in which a young Samson is showing off in front of two pretty girls, and is embarrassed when his mother catches him.