It was on this day, February 20, 1947, there lived a Palestinian shepherd who went by the name of Mazra. History reveals that one day while he was tending to his flocks, he came across some caves that he decided to explore. While he was walking around, he came across some very old looking clay pots that were filled with what seemed like some ancient scrolls. Thinking that they may be of some value, Mazra took some of the pots to an antique dealer. This dealer was known as Khalil Iskander. 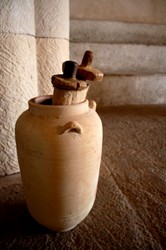 After Khalil had examined the clay pots, he told Mazra that they did have some value, but not much.

After hearing this, Mazra wasn't satisfied with the answer that Khalil had given him, so therefore he left, in order to seek a second opinion.

Now this would come through a friend, who just so happened to be an expert, when it came to old manuscripts.

Now after reviewing the old scrolls, Khalil friend decided to go and show them to a man who was known as Athanasius Samuel.

He was an Orthodox Archbishop. Now when Athanasius started looking over the scrolls, he immediately noticed that these scrolls were of the Old Testament.

After seeing this, Athanasius became excited, and so therefore, decided to buy them from Mazra.

But Athanasius still wasn't quite sure what these scrolls were really worth, so he started showing them around to some other experts. And it would be at this point, they would all agreed that, these scrolls were very old, but felt like they held no real value.

Nonetheless, after many months had gone by, and a new year had started. Athanasius decided to take the old scrolls to the American University of Beirut. Now it was at this university, that Athanasius met a Biblical scholar who went by the name of John Trevor. After John had examined the old scrolls he became very interested in them and believed that they were very significant and held tremendous value.

Perhaps the Greatest Discovery from within
The Twentieth Century

So after learning this, John took photos of the old scrolls. He then proceeded to show them to some of the very best paleographers from around the world. Now with these paleographers being experts, when it came to the studying of ancient writings and inscriptions, they were able to find that these old scrolls were older than any biblical text that had ever been found.

They also discovered that, these scrolls dated back to some one hundred years before Christ was even born. After learning this, excitement resonated from throughout the world, once these scrolls had been confirmed authentic. After this had happened, these scrolls became another piece that were added to the many other written resources that had further given credibility to the bible's Old Testament text. I also like to point out that there were more than five hundred manuscripts that were found from among the eight hundred and seventy scrolls from within the discovery.

Every Old Testament book except for the book of Esther was identified from within these old scrolls. It has also been noted that, the copy of the book of Isaiah was more than a thousand years older than any Old Testament manuscript that had been found. These old scrolls which are known as the Dead Sea Scrolls, ended up becoming in the minds of many, the greatest archaeological discovery from within the twentieth century.