"Now it is evident that no one can terrify or subdue us who have believed in Jesus over all the world. For though we are beheaded, and crucified, and exposed to beasts and chains and fire and all other forms of torture. It is plain that we do not forsake the confession of our faith, but the more things of this kind which happen to us, the more are there others who become believers and truly religious through the name of Jesus Christ."

Throughout the years, there have been countless individuals who have given their lives in the name of Jesus Christ. With this page, I'll attempt to list, and provide some insightful information on some of them. Make no mistake, these martyrs suffered persecution for their faith in the Lord Jesus Christ. They were God's servants, who were totally devoted towards the teachings of Jesus Christ. Understand that those who have chosen to serve the world, hate and despises the servants of God. For they will do anything in their power, when it comes to discouraging, and in some cases, kill those individuals, who have chosen not to compromise their beliefs. 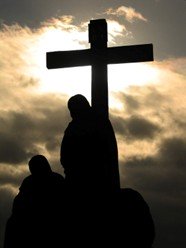 The martyrs that I've chosen to write about, were willing to stand strong in the face of their opposition.

They didn't waver, or doubt, when it came to their faith in the Lord. These martyrs had given up their freedoms, because they had chosen to follow Christ.

For they were imprisoned, unjustly condemned, falsely accused, ridiculed, scorned, crucified and murdered, because they were willing to stand up for the real truth, which is Jesus Christ.

And judging by the actions, when it came to those who had chosen to deny Christ, we can clearly see, they had mindsets that were malicious, spiteful and filled with envy.

To put it simply, those who had chosen to reject Christ, would not be deterred, when it came to their worldly ways. For they were determined to remain totally devoted to the wickedness, and corruption of the world. Make no mistake, they will forever find delight, and pleasure, when it comes to the temporal and material things that the world has to offer.

"If the world hates you, keep in mind that it hated me first. If you belonged to the world, it would love you as it own. As it is, you do not belong to the world, but I have chosen you out of the world. That is why the world hates you. Remember the words I spoke to you: 'No servant is greater than his master.' If they persecuted me, they will persecute you also. They will treat you this way because of my name, for they do not know the One who sent me."

Automatically stay updated on what's going with this site, as I add articles on different Christian Martyrs, that have given their lives in the name of Jesus Christ.

RSS FEED TOOL : This option will help keep you updated on all the latest pages from "Christian Resources Today." This tool is located at the bottom of the Navigation Menu over to your left.

PAY IT FORWARD TOOL : This is another site tool feature that will allow you to share a specific page that's located on this website.

You can do this by using a special HTML CODE (that we provide you with) which is specific to that one particular page. This will allow you to share that particular page on your blog, a Web page, forums, your Social Networking account, or anywhere else that someone would find this page to be a blessing. This link is also located at the very bottom of every page.

Now when it comes to this Christian martyr, much is not known. But what we do know, is that Andrew was definitely one of the two that heard John the Baptist, declare that Jesus was the Lamb of God. So therefore, we also know that Andrew was one of John the Baptist's disciples. We also know that he was the younger brother of Peter. Andrew and his brother, were both fishermen that had came from a place that was known as Bethsaida of Galilee. Andrew was also with that group of twelve, Jesus had commissioned to go out, and drive out evil spirits, and to heal every disease and sickness they'd came across.

When it comes to this Christian martyr, it was been written that James had extraordinary courage; so much so, one of the men that was guarding him was really impress with him. The guard was so impress, he'd fell to his knees, so that he could ask for forgiveness of his sins. And it was also at that moment, the guard had confessed, he too, was a Christian. The guard had also made the remark that James should not die alone. And because of this, both James and the guard was beheaded by the sword on that day.

Now when it comes to this Christian martyr, there isn't much history that has been written. But what we do know, is that Matthew had preached in Palestine for some years, and then traveled to foreign countries that would eventually lead him to Ethiopia. And this would be where he became associated with Candace, the queen of Ethiopia. Sadly, it is rumored that later on, he was pinned to the ground, and was then later beheaded by the ax in the city of Nadabah somewhere around 60 A.D..

When it comes to this Christian martyr, we have Peter confirming that this group of disciples (which included Matthias) was with Jesus from the beginning, all the way until Christ's ascension: "Therefore it is necessary to choose one of the men who have been with us the whole time the Lord Jesus went in and out among us, beginning from John's baptism to the time Jesus was taken from us. For one of these must become a witness with us of his resurrection." -- (Acts 1:21-22)

Philip was the Christian martyr who went to Nathanael, and invited him to come see Jesus by saying: "We have found him, of whom Moses and the prophets did write." Philip didn't hesitate or question the credibility of Jesus, like Nathanael did when he said: "Can any good thing come out of Nazareth?" So maybe there was something special about Philip that Jesus already knew? For Philip would receive a direct, rare invite, from Jesus himself. Understand that Christ had went to Galilee, in order to seek Phillip out personally.

Stephen was the Christian martyr that had given a speech that was so powerful, it filled the crowd that was standing before him, with a hellish hatred. The Scriptures points out, they were cut to the heart by his words. So much so, they proceeded to nash on Stephen with their teeth. The wicked mob soon cried out in a loud voice and stopped listening to him. They were all on one accord while they were doing these horrible things to this man of God.

Rogers was a Christian martyr who was put under house arrest for his faith. Eventually, he would be transferred to the infamous Newgate Prison. It was at this prison, Rogers would be sentence to death. Rogers was offered a chance to live, and avoid execution, if he would recant Protestantism, and convert back to Catholicism. He refused this deal, and because of this, he was immediately burned at the stake on February 4, 1555.

This was a Christian martyr, who on this day February 10, 288 had been given the recognition of being the first Christian to be martyred in the Britain Isles. Know that there's not much known about Alban, but according to the account of his story. Alban was a man of great courage who would constantly put his life on the line for others. He did this by offering shelter and protection for those that were fleeing the Roman persecution of Christians during the latter part of the third century.