Thank you for visiting and for your support; and thank you for being such a blessing to this site:

"Prayer is the burden of a sigh, the falling of a tear, the upward glancing of an eye; when none but God is near."

The Power of Prayer

Proverbs 15:8 states: "The sacrifice of the wicked is an abomination to the Lord; but the prayer of the upright is His delight."

From throughout the Word of God, its been revealed that when it comes to prayer, the practice of it, is vital for our survival as believers. Now I'm making this statement, because God's Word reveals that prayer has the ability to open doors, especially when it deals with so many things that we desire as children of God. While in the process, from within, the desire for ungodly things, is destroy. Know that the Lord delights in our prayers. And make no mistake, He's always ready and willing, when it comes to listening, as He starts the process of answering our prayers. I truly hold true to this notion, for as long as we pray, according to the Lord's will, and His will, is according to His Word, God will answer our prayers. 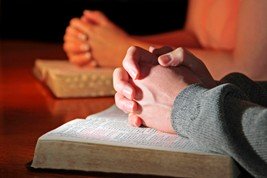 Now it doesn't necessarily take a great sacrifice, as most would believe.

Because when it comes to sacrifice, I believe there's too much self-effort involved.

So therefore, we must remember that our "works" doesn't impress the Lord as much as we think it does.

Now I'm not saying that sacrificing the ungodly things from within our lives, doesn't matter. For it does. But if you're truly looking for a breakthrough in life, rather spiritually, or in a natural sense. Then there's nothing more effective when it comes to this, than prayer. Understand that the desires of our hearts are met in prayer. Thank God that prayer changes people and their situations.

Also keep in mind, diligent prayer, is the path to take, if we want to experience success and victory from within our lives. Therefore I exhort the children of God, to have the confidence, while making their requests known to the Father through prayer.

James 5:16 states: "Confess your trespasses to one another, and pray for one another, that you may be healed. The effective, fervent prayer of a righteous man avails much."

Let us also learn to pray for the members of our family, friends, community and our nations. Let's also pray for the Lord to heal us from failure, pain, destruction and all sicknesses. And while doing so, we must have the confidence and faith to know, that as long as we keep God at the center of what we do, we will be victorious. Prayer is the fuel that keeps us going in our Christian lives, and it's rooted deeply from within the foundation of our faith. However with that being stated, I hope you have been encouraged and inspired by the reading of this Bible devotion. Keep on praying and whatever you may find yourself doing, may the favor of the Lord be upon you.