The Tower of Babel

It Was Suppose To Have Been - A One World Empire

"Come, let us build ourselves a city, with a tower that reaches to the heavens, so that we may make a name for ourselves and not be scattered over the face of the whole earth." -- Genesis 11:4

In the last article, we'd taken a closer look at Nimrod, the mighty son of Cush. I'd touched on how Nimrod was a different type of breed, a different type of man, for we'd discovered that he wasn't content with being a ruler over just one kingdom. No, Nimrod was a conqueror at heart, and being a hunter of living things, was simply in his nature. And it didn't matter if he was a hunting man or beast. And just like I'd stated in the last article, during Nimrod's reign, we find that he had established four different cities from within The Land of Shinar: Babel, Erech, Accad, and Calneh. 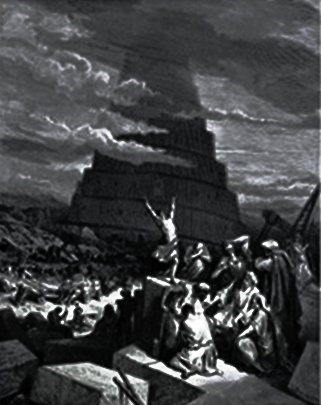 We'd also learned that after Nimrod had settled in Assyria, we're told that he'd eventually built the capital's city of Nineveh, along with the cities of Rehoboth Ir, Calab, and Resen.

I'd also briefly mentioned the possibility; Nimrod was perhaps the mastermind behind the building of the infamous tower that was known as The Gateway to the Heavens, a.k.a The Tower of Babel.

Now let's use this article to see if we can shed a little bit more light on this infamous event. To begin with, I would like to touch on a couple of very important things when it comes to this pivotal moment.

First off, this event had happened around the fourth generation of humanity. This means it had taken place about 100 years after The Great Flood of Judgment. Next, we find that during this time, the human race had spoken with one common language:

"But the Lord came down to see the city and the tower which the sons of men had built. And the Lord said, 'Indeed the people are one and they all have one language, and this is what they begin to do; now nothing that they propose to do will be withheld from them. Come, let Us go down and there confuse their language, that they may not understand one another's speech." -- Genesis 11:5-7

Nevertheless, we move forward: "As men moved eastward, they found a plain in 'The Land of Shinar' and settle there. Then they said to one another, 'Come and let's make bricks and bake them thoroughly.'" -- Genesis 11:2,3

Now, as I'd stated earlier, there's strong evidence that supports the viewpoint, this project might have been planned and orchestrated by Nimrod, who himself was the founder of Babylon. I would also like to point out that the name Babel means: The gate of God. I'm mentioning this because later on after God judged the human race. For God judge them regarding their vain attempt at trying to achieve some type of historical elite status. The human race tried doing this by trying to construct some kind of symbolism that represented what they perceived as divinity. But later on, the Lord changed the name Babel to mean: confusion.

Now when it came to the bricks that the passage mentions. Keep in mind, because of the land's layout; Nimrod didn't have the rock quarries necessary for him and his followers to produce enough stones for a massive project such as this. Also know, there has been strong archeological evidence that the walls of Babylon had indeed been made of brick.

The Vain Glory of Humanity

However that may be, again, we move forward: "Come, let us build ourselves a city, with a tower that reaches to the heavens, so that we may make a name for ourselves and not be scattered over the face of the whole earth." -- Genesis 11:4

When it came to the Tower of Babel, the primary goal was marking the place - in which a one-world empire that Nimrod wanted to create would be established and symbolized for all the known world to see. Understand, when it came to this city and tower the human race was going to build, it was strictly fueled by their pride, vain-glory, and defiance towards the One True God.

Keep in mind, Nimrod and his followers had already turned their backs on the Lord. And it's because of their rebellious hearts; humanity decides to build its own gateway to the heavens. The human race did this by constructing a massive tower monument. I mean, after all, they must have thought: "Who needs God? We can be great all by ourselves." And it's this type of attitude that Nimrod and his followers had. This leads me to believe that this massive building project was simply fueled by their prideful and vain attempt to achieve some sort of historical elite status, all on their own.

They also must have thought that this massive tower would've served as some type of symbol, and representation, of the kind of power they felt they had finally achieved as a generation. Nimrod must've felt the tower would have stood the test of time, therefore showing future generations just how wise, powerful, and wealthy they thought they were as a generation.

God Came to See This Tower

Needless-to-say, the Lord was not pleased: "But the Lord came down to see the city and the tower that the men were building." -- Genesis 11:5


First off, I believe that God is everywhere, all the time. I'm simply pointing this out because it's presumed that this passage seems to be pointing out that God had manifested His presence and power in order to be displayed in that particular place, during that moment in time, for all that was there to be a witness to.

Also note, when this passage states "Let us" : "The Lord said, 'If as one people speaking the same language they have begun to do this, then nothing they plan to do will be impossible for them. Come, let Us go down and confuse their language so they will not understand each other.'" -- Genesis 11:6-7

Now it's presumed that this is referring to the Blessed Trinity. Now I believe the Blessed Trinity deals with the Father, Son, and the Holy Ghost. Furthermore, the passage points out that God wanted to confuse the language of the human race to create different cultural divisions from within its overall makeup. Being that it was at this moment, the Lord had acknowledged that, when humanity is completely united, they will be able to do anything they can imagine from within their hearts and minds. Even if their actions were meant to go against God and His overall plan for them.

We've ended this article by mentioning the problem with the human race being united, working as a global collective unit. Remember, this wouldn't be the first time humanity had decided to work as a collective, being that the last time the human race had tried this feat, we learned that God had to right the wrongs, and He did this by sending the Great Flood upon the surface of the earth. Nevertheless, in the following article, we'll touch on some specifics regarding the actual tower.

22) The Introduction of Abraham (Abram)