The Chariot of Fire Departure

So as they'd continued walking along together, from out of nowhere, a chariot of fire, that was being pulled with horses of fire, appeared, and drove themselves between the two of them, causing Elijah, and Elisha, to be separated. And after this had happened, Elijah was immediately caught up in a whirlwind, as he was taken up into the heavens. Now after seeing this, Elisha cried out: "My father! My father! The chariots and horsemen of Israel!"

In the last article we'd learned, not only did king Ahab pass away on the battlefield, just like the Lord's prophet had foretold: "I saw all of Israel scattered on the hills like sheep without a shepherd, and the Lord said: 'These people have no master. Let each one go home in peace.'" -- 1 Kings 22:17 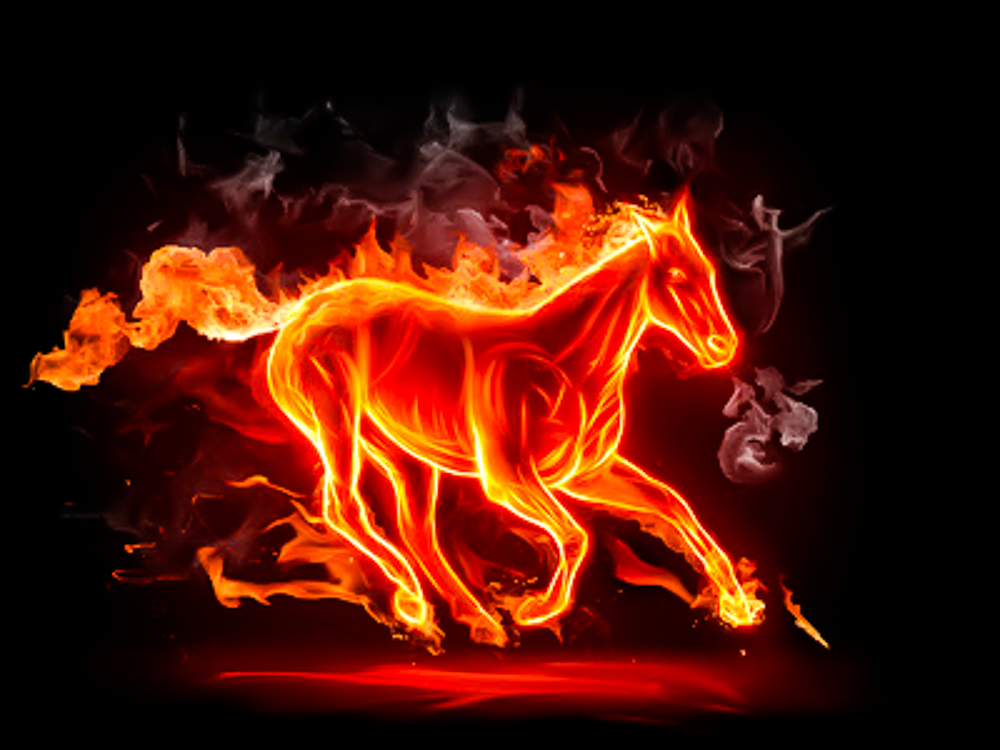 
With that being stated, when it came to Ahab's son Ahaziah, he too, would follow in the wicked footsteps of his father. And perhaps, during his reign as king, this is why we would find the type of misfortunes, that had befallen him early on. Remember that the Sacred Record, had pointed out, soon after Ahaziah had taken over his father's throne, he had fallen through the lattice of his palace. Make no mistake, the fall would prove to detrimental to his health, being that he had sustained some very serious, life threatening injuries, because of it. To make matters worse, Ahaziah angered God, when he'd sent out his messengers, ordering them, to seek out help from the Ekron pagan deity that was known as Baal-zebub.

And it's during this time, the Lord would use prophet Elijah, when it came to sending Ahaziah, some very bad news: "Is it because there is no God in Israel, that you are going off to consult Baal-zebub, the god of Ekron? Therefore this is what the Lord says: 'You will not leave the bed you are lying on. You will certainly die!" -- 2 Kings 1:16

Because of this, Ahaziah reigned for only two short years. Remember that these events, would also fall in line with the prophecy, the Lord had told to Ahab before he had died: "Have you notice how Ahab has humbled himself before me? Because he has humbled himself, I will not bring this disaster in his day, but I will bring it on his house in the days of his son [Ahaziah]." -- 1 Kings 21:29


The Company of the Prophets

Be that as it may, we begin to move forward. And because of this, we find ourselves quickly approaching the end of Elijah’s ministry. For the Scriptures tells us, that at this point in time, the prophet and his apprentice Elisha, was now on their way back from Gilgal. It would also be at this time, Elijah would tell Elisha: "Stay here; the Lord has sent me to Bethel." But Elisha was determined to stick with his mentor, until the very end. So this is why we find him telling Elijah: "As surely as the Lord lives, and as you live, I will not leave you."

Now it would be during this time, we find the two men headed down to Bethel. And it's at this point, we're told about the "Company of the Prophets." Now the Sacred Record informs us, that this was a particular group of student prophets, who had came out, in order to meet with Elisha. And upon doing so, they spoke these words to him: "Do you know that the Lord is going to take your master from you today?" And after Elisha had heard this, he responded by saying: "Yes I know, but do not speak of it."

NOTE: This group of God-fearing servants; which was a group that was simply known, as the 'Company of the Prophets.' Understand that this was simply a name, that referred to one of the many prophetic schools, that had been started earlier, by the prophet Samuel. Now when it came to these schools, know that they were located, all throughout Bethel, Jericho, and even possibly Jerusalem.

Elisha Do As You're Told : Stay Here

Be that as it may, while Elisha was talking with the other student prophets, Elijah came over to him, and told his apprentice: "Stay here Elisha, for the Lord has sent me to Jericho." However, once again, Elisha responded by saying: "As surely as the Lord lives, and you live, I will not leave you." And after hearing this, both Elijah and his apprentice, headed over to Jericho.

And just like last time, when they'd arrived, the 'Company of the Prophets' that were located in that place, came up to Elisha, and asked him: "Do you know that the Lord is going to take your master from you today?" And once again, the young apprentice would tell them: ‘Yes, I know; but do not speak of it."

Elisha What Do You Want ?

So Elijah and his apprentice, walked onward together, until they'd approached the river Jordan. Now it would be at this time, the Sacred Record reveals, that there were found to be, fifty student prophets that were watching Elijah, and Elisha, from a distance. And when Elijah had approached the river Jordan, he took his cloak, and rolled it up, and struck the river with it. And by doing this, immediately the river divided, and Elijah and Elisha, crossed over on dry ground, to the other side.

Now once they'd reached the other side, of the river Jordan, Elijah asked his student: "Tell me, what can I do for you, before I am taken from you?" And after hearing this, Elisha responded by saying: "Let me inherit a double portion of your spirit." Now Elijah responded by saying: "You have asked a difficult thing, and yet if you see me when I am taken from you, it will be yours... otherwise not."

The Chariot of Fire

So as they'd continued walking along together, from out of nowhere, a chariot of fire, that was being pulled with horses of fire, appeared, and drove themselves between the two of them, causing Elijah, and Elisha, to be separated. And after this had happened, Elijah was immediately caught up in a whirlwind, as he was taken up into the heavens. Now after seeing this, Elisha cried out: "My father! My father! The chariots and horsemen of Israel!"

Elisha stood there astonished, as he'd watched his master be taken up in the air, until he could no longer see him. Sadden that Elijah was now gone from this earth, Elisha took hold of his own clothes and tore them apart.

NOTE: Now I want to point out, at this time, there were only two individuals, that had been recorded from within the Sacred Record, that had the privilege of going on to glory, without having to taste the bitterness, of a physical death. Prophet Elijah was one, and prophet Enoch, was the other. The record of Enoch can be found at Genesis 5:18–24.

All Three Judgment Phases : Are Still In Play

However, even though Elijah, had now been taken by God. Keep in mind, we're still in a three phase judgment plan, that the Lord has going against Israel. Remember what the Lord had told Elijah, when he was back at the mountain of God : "Go back the way you came, and go to the Desert of Damascus. When you get there, anoint Hazael king over Aram. Also, anoint Jehu son of Nimshi king over Israel, and anoint Elisha son of Shaphat from Abel Meholah to succeed you as prophet." -- 1 Kings 19:15-16

Phase One Almost Complete: Now that prophet Elijah, has been taken to the heavens by the Lord. It's now Elisha's turn, to take the reins. For he will no longer be seen as an apprentice, but now a master prophet.

Phase Two Still In The Works: Thanks to the two crushing defeats, he'd incurred, when he battled Ahab. We find that Ben-Hadad, has now been partially removed from his throne, when it comes to him, being the king of Syria. And because of this, the door is now somewhat opened, for Hazael to eventually take the throne, later on, down the line.

Phase Three Still In The Works: Now that Ahab has passed away. And being that his son Ahaziah, had a very short reign as king. And to make matters worse for the house of Ahab -- Ahaziah wasn't able, to produce an heir before his death. And because of this, Ahab's descendants, are a few steps closer, to being completely cutoff, from the throne of Israel. And it's for this reason, Jehu comes a few steps closer, to becoming king of Israel.

NOTE: I just wanted to point out, even though God had made the three phase judgment promise to Elijah initially; and even though God has taken him up to the heavens. The Lord will now use Elisha, when it comes to carrying out and finishing the judgment plan that He had started with Elijah.

Now that Elijah, had been taken up, to the heavens, by a whirlwind, that had been enacted, by the hand of God; the prophet's apprentice Elisha, gets blessed, with a double portion of Elijah's spirit. And it's for this reason, Elisha becomes the new master prophet. In the next article, we'll learn if the other student prophets, will accept him as such; and if they will be able to move on, from their beloved master, Elijah.