The Gospel of Jesus Christ

"Christ's riches are unsearchable, and this doctrine of the Gospel; is the field, this treasure is hidden in." -- Thomas Goodwin

"But we preach Christ crucified, unto the Jews a stumbling-block, and unto the Gentiles foolishness; but unto them which are called, both Jews and Greeks, Christ the power of God, and the wisdom of God." -- 1 Corinthians 1:23-24

Now I'll like to start with pointing out three things from within this Scripture. Now two of them I will touch on briefly, closing with the third. I will use these three points of reference from within this Scripture, with the sole purpose of trying to give you an understanding as to why, placing our faith in God's Word should give us the boldness, and courage, to talk freely about The Gospel of Jesus Christ. 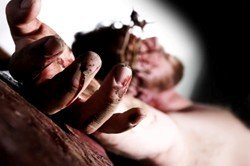 Now obviously, there are plenty of more reasons on why we shouldn't be afraid to share the gospel.

But when it come to this short article, I will focus on the three that are found from within the featured Scripture above.

So let's start with : "But we preach Christ crucified, unto the Jews a stumbling-block."

Now first you will notice, this Scripture shows that Jesus Christ was rejected by his own people. And honestly, this shouldn't be too much of a surprise to us, since the prophets of old, had prophesied about the reactions of those, who Jesus had came into contact with, centuries before He was even born. Remember what the prophet Isaiah had to say: "He was despised and rejected by men, a man of sorrows, and familiar with suffering." -- Isaiah 53:3

And actually, why not? Think about it, why should Jesus' own people embrace the teachings of a stranger? I mean after all, they're the children of Abraham, and the stewards of the perfect law that was given to the prophet Moses, which was done by the hand of God on the top of Mount Sinai. These are the traditions that the Israelites have kept for centuries, before Jesus had even came on the scene.

Who is this Jesus ?

Take note of this Scripture: "Coming to his home town, he began teaching the people in their synagogue, and they were amazed. 'Where did this man get this wisdom and these miraculous powers?' they asked. 'Isn't this the carpenter's son? Isn't his mother's name Mary, and aren't his brothers James, Joseph, Simon and Judas? Aren't all his sisters with us? Where did this man get all these things? And they took offense at him.'" -- Matthew 13: 54-57

Now after reading this, one could've easily asked themselves, why did the Israelites eventually have a change of heart, when it came to Jesus, especially after they were so steadfast in their actions, when it came to rejecting Christ? What could have possibly happen, that would make a people that were so devoted, and committed to their covenants, traditions and ancestry, to end up switching and believing?

Take note of this Scripture: "Peter replied, 'Repent and be baptized, every one of you, in the name of Jesus Christ for the forgiveness of your sins. And you will receive the gift of the Holy Spirit. The promise is for you and your children and for all who are far off - for all whom the Lord our God will call.' With many other words he warned them; and he pleaded with them, 'Save yourselves from this corrupt generation.' Those who accepted his message were baptized, and about three thousand were added to their number that day.'" -- Acts 2:38-41

Rejected by the Gentiles

Now notice how the featured Scripture points out, how the Gentiles (Greeks) had rejected Christ as well: "...and unto the Gentiles foolishness..."

Now when Jesus was introduced to the Gentiles (Greeks), just as the Scripture points out, they too took His teachings as foolishness. And again, honestly, why not? Why should they believe in what they saw as charms and luck? I mean after all, isn't it just pure nonsense to believe in such things? It's very easy for one to wonder at this point, why should they take this Jesus seriously?

For you see, this was a people who had earned the reputation of being eloquent and wise. They too, also had their traditions as well, and from out of them, came great philosophers. For they had people like: Socrates, Plato, Aristotle and Demosthenes. With great minds like these, why should they have listen to this person known as the Christ. And yet, in spite of all of this, something very powerful happen.

Take notice to this Scripture: "Then Paul and Barnabas answered them boldly; 'We had to speak the Word of God to you first. Since you reject it and do not considered yourselves worthy of eternal life, we now turn to the Gentiles. For this is what the Lord has commanded us: I have made you a light for the Gentiles, that you may bring salvation to the ends of the earth.' When the Gentiles heard this, they were glad and honored the Word of the Lord; and all who were appointed for eternal life believed.'" -- Acts 13:46-48

The Power of the Gospel

Nevertheless, we have now reached my final point from within this article's featured Scripture: "Christ the power of God, and the wisdom of God."

Now keep in mind, the word "gospel" simply means "Good News." Understand that the Jews and the Gentiles, were in a very unique position, to witness first hand, the impact and power of Jesus' life and earthly ministry. They were privileged to witness the resurrection and the ascension, of our Lord and Savior, as He went home to be with the Heavenly Father, and sit on His right side.

I'll tell you this, in order for you to grasp this final point, you'll need to have, what I like to call "pure faith" when it comes to fully trusting in the Word of God. We'll need this type of faith, in order for us to benefit from these conclusions that I'm about to point out. For you see, having true faith, will allow us to see that the Gospel of Jesus Christ is definitely, a thing of both beauty and power. For the same power that caused Christ's disciples to willingly give their lives for what they believed. Is the same power that had caused, Saul of Tarsus to convert from one, who murder the followers of the One True God, to eventually being known as Paul the Apostle.

Keep in mind, Paul was one of the greatest ambassador's and soul winners that ended up representing that same true God. That same power, which caused a child of God to be totally devoted to delivering God's message in the face of opposition, to all four corners of the earth. That same power that gives a child of God the courage, and confidence, to stand before a person, who's dying and suffering from some type of affliction in their body. And because of that, you end up finding that same child of God, standing there in the face of adversity, displaying nothing but courage and confidence, as they pray a prayer of faith and healing, while knowing that the Almighty God has already answered them.

For it's that same power that gives a child of God, the much needed courage and strength, to eventually be a martyr for the Gospel of Jesus Christ if need be. Doing all of this, while they're being mocked and taunted from within the midst of death and suffering for what they truly believe in.

The Power of Transformation

For it's that same power, that gives a child of God, the strength to totally turn their life around, doing it all, through the renewing of their mind, as they are found giving up the temporal and corrupt things of this world. It's that same power that ends having someone who believes different from you; to look at you as being weird, or peculiar, eerie, or eccentric, and in spite of all of this, you still love God, loving Him for how He has made you, and all that He poured into you.

For it's that same power, that causes you to be appreciative of the gifts and talents, your Heavenly Father has planted inside of you. The same power, that will allow you to understand the reason as to why you're not seen as the same as the world. For many will fail to see, it's because you have been transformed and set apart. Thanks to Christ, you are now a child of God and heir to the Eternal Kingdom.

Because of this transformation, you now realize, that it's an honor, and privilege, to be made in God's likeness and image. What a rare opportunity to be able have, when it comes to existing and being able to play a role from within God's greatness. Doing all of this, no matter how small, or large of a role you play from within God's magnificent creation.

To be appreciative of the gifts that deals with salvation and redemption, that had taken place through the blood and sacrifice of our blessed Lord and Savior, Jesus Christ. For I'm truly thankful, and joyful, when things are coming from God's gifts to us. Especially when it comes to His mercy and grace. For He recognized, and benefited, from the power of our spiritual guide, teacher and comforter the Holy Spirit.

Only the Gospel of Christ Can Do This

Understand that Christ is the Gospel, and so therefore, becomes the wisdom of God. The more you adhere to the teachings of Christ, the more you will be molded into what God created you to be. This is why our beliefs, which gives us the faith that empowers us to boldly and courageously, talk about, and share The Gospel of Jesus Christ from throughout the whole entire world.