Now it's at this time we learn about the true agenda behind Simon Magnus conversion to Christianity: "When Simon saw that the Holy Spirit was given at the laying on of the apostles' hands, he offered them money and said, 'Give me this ability so that everyone on whom I lay my hands may receive the Holy Spirit.'"

Earlier we'd learnt, Philip was one of the first seven appointed deacons, who had supported and aided the apostles' ministry, by waiting on tables. Shortly after, we also learnt that, a great season of persecution had broken out against the Christian church, and so therefore, Philip and the others who were preaching the gospel, were scattered abroad. Because of this fierce opposition against the work of the Lord, Philip ended up going down to the city of Samaria to preach the gospel of Jesus Christ, amongst the Samaritans. It would be during this time from within the city of Samaria, the Scripture informs us, the Samaritans had been bewitched and deceived by a man named Simon Magnus. 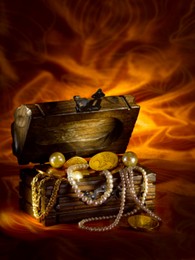 This man was found to have had practiced sorcery, and was a conjurer of sorts. But in spite of this deceit, the Scripture confirms, Philip still had great success when he preached the gospel.

God used him in mighty ways, when it came to doing miracles and signs.

It would be these miracles and signs that would confirm that Philip wasn't a fake, and a deceiver, like Simon Magnus was known for. For the people began to understand, that Philip had indeed, been commissioned by the eternal heavens, when it came to speaking for the One True God.

Because of this mighty showing that was being done through Philip, many Samaritans had become believers and followers of the Lord Jesus Christ. Now I also would like to point out that Simon Magnus was also there to witness first hand, when it came to the power of the gospel. And surprisingly, he too, became a believer.

Be that as it may, Philip ended up having an event that had sent ripples from throughout the land. And because of this, word had gotten back to the apostles who were also in Jerusalem at the time: "When the apostles in Jerusalem heard that Samaria had accepted the word of God, they sent Peter and John to them. When they arrived, they prayed for them that they may receive the Holy Spirit, because the Holy Spirit had not yet come upon any of them; they had simply been baptized into the name of the Lord Jesus." -- Acts 8:14-16

Now let's look at something in this passage for a moment: "When they arrived, they prayed for them that they may receive the Holy Spirit, because the Holy Spirit had not yet come upon any of them; they had simply been baptized into the name of the Lord Jesus."

Understand, this wasn't some slap in the face, when it came to what Philip was doing. Make no mistake, God had used him mightily. The apostles were sent, simply, so they could take the Samaritans to the next spiritual level. For you see, God used Philip to perform and give them a water baptism ceremony and to touch their hearts and minds, and because of this, from this point forward, they were saved and believed in Jesus Christ.

Understand, when you're filled with the Holy Spirit, not only are you in touch with God, but you're also able, to identify with the comforts that He brings into your life both mentally and spiritually. For the Holy Spirit helps you to face your fears, and provides you with the type of spiritual gifts that are able to help you to be more effective, when it comes to the furtherance of the gospel. This is what the Samaritans were lacking, and this is why God sent Peter and John, when it came to fulfilling that need.

Now it's at this time, we're given some insight, when it came to the true agenda that was behind Simon Magnus conversion to Christianity:

"When Simon saw that the Holy Spirit was given at the laying on of the apostles' hands, he offered them money and said, 'Give me this ability so that everyone on whom I lay my hands may receive the Holy Spirit.'" -- Acts 8:18-19

Now as we can see by the passage, Simon Magnus wanted to pay Peter and John, so that he could receive the spiritual gift, when it came to filling people with the Holy Spirit. Simon Magnus, wanted to use this gift, so that he may continue to bewitch and control the Samaritans, while he made a monetary profit for himself in the process.

But Peter would rebuke the sorcerer for his vain and vile request, because he knew what Simon Magnus true intentions really were:

"May your money perish with you, because you thought you could buy the gift of God with money! You have no part or share in this ministry, because your heart is not right before God. Repent of this wickedness and pray to the Lord. Perhaps he would forgive you for having such a thought in your heart. For I see that you are full of bitterness and captive to sin." -- Acts 8:20-23

Peter had revealed to Simon that he knew of his true intentions when it came to the real reason why he decided to follow, and become apart of their ministry. Just the mere fact that Simon Magnus had belittled the gift of the Holy Spirit, by treating it as something that could be brought. Treating the spiritual gifts of the Holy Spirit as something that is on par, with some common worldly gifts that deal with one's provision or practical means, shows just how corrupt Simon Magnus mind and heart truly was.

Simon Magnus knew that Philip, Peter and John were the real deal, and for this reason, he followed them. But his mindset had severely limited his perception of God, for he knew not his mistake, until Peter had pointed it out to him. Perhaps Simon Magnus felt like everybody, thought the same as he did, when it came to their beliefs? And this is probably why, he responded with concern, after Peter had rebuked him, saying to the man of God: "Pray to the Lord for me so that nothing you said may happen to me."

Be that as it may, it's not known if Peter and John had prayed for Simon Magnus, and we don't know if he was ever lead whole heartily to the Lord. But when it came to the apostles, after they had testified and proclaimed the gospel of Jesus Christ, they returned back to the city of Jerusalem while continuing to preach the gospel in many Samaritan villages along the way.