Here we find ourselves at what I like to call : The Exodus Stage. This is a time period where Moses leads the Hebrews out of captivity from Egypt. At this time, I'd like to point out, this is a stage that lasted for about 325 years. From within this stage, we will explore events that deal with Moses' journey to Mount Sinai; the first mention of manna from within the Bible; the institution of the Sabbath, and the recorded account of the Ten Commandments.

Also during this stage, you'll come across other events that are dealing with the building of the Tabernacle; and the probation period of forty years that the Hebrews had to endure, while they were out in the wilderness. 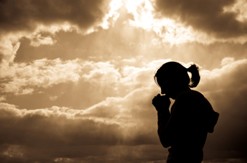 Be that as it may, as we move forward, we will find that at the beginning of this stage, Moses had two long lost siblings, who were known as Aaron and Miriam.

Little would they know, they too, will play significant roles from within the development of Israel as a nation.

Now this page, will focus more on Miriam, and less on her brothers. First off, when we first hear about Miriam, we find her watching her baby brother Moses as he sailed down the Nile River.

Now some time would pass, when we hear from Miriam again. And when we do, we find her helping her brother Moses, when it came to him leading the Israelites in a song of victory, after they were finally lead out of the hands of the Egyptians. Keep in mind, this is right after they had witness the awesome power of God, and after they had personally seen Pharaoh's army, swallowed by the sea: "Miriam sang to them: 'Sing to the Lord, for he is highly exalted. The horse and its rider he has hurled into the sea. '" -- Exodus 15:21

Now after we fast forward for a little bit, we find ourselves at a time, when we find Aaron and Miriam speaking out against their brother Moses. Keep in mind, this is at a time, when Aaron had been established as a high priest, and Miriam herself, was known as a prophetess. This situation happened, a little after God had used Moses to pick, seventy qualified elders, that would help Moses to bear the governing burden of the people.

However, Aaron and Miriam were mainly complaining, about Moses marriage to a Cushite woman. For they'd feared, that she may possibly have a great influence over Moses. It's also rumored, that Moses' wife, possibly had some input on who the seventy elders would be as well. Now the Sacred Record seems to shine some light, on why Miriam and Aaron had thought the way that they did, when it came to their brother's wife: "Has the Lord spoken only through Moses?" they asked. "Hasn't he also spoken through us?" -- Numbers 12:2

Speculation on the Family Drama

Now it gets a little tricky here, so if you can stay with me a bit. I want to point out, when Moses, after forty years, had left his life and eminent royal position, by fleeing the Egyptian palace. Which had happened, after he had killed an Egyptian guard that was beating on a Hebrew slave. Moses would spend the next forty years of his life in Midian. And it would be during this time, Moses would marry a Midianite woman who was known as Zipporah. Now she was the daughter of Jethro, who was a priest of Midian and perhaps a ruler of some sorts.

Now it's also during this time, Moses two sons Gershom and Eliezer were born. I also want to point out, that even though Zipporah was a Midianite, she was also refereed to by some, as that "Ethiopian woman."

I point this out, because the country of Ethiopian, was settled by the descendants of Cush, and when you look at the scripture (Habakkuk 3:7) it insinuates that the Midianites, and Cushan, are perhaps one in the same. And this is why it's believed that Miriam could've been complaining about Zipporah, being that Zipporah is considered to be both Midianite and Cushite.

It has also been rumored, that Miriam didn't get along with Zipporah. But there is also speculation, that Moses had married again, after Zipporah had died, and perhaps, it was Moses' new wife, that Miriam was complaining about. Now you see, why this account had became a little tricky. Nevertheless, it's time to move forward, before this account gets even more confusing.

Needless to say, the timing of Aaron and Miriam's complaining didn't come at a good time. Especially being, that the Hebrew people were giving Moses a very hard time during this period as well, when it came to his ministry. By having disruption in the higher ranks, when it came to Moses, Aaron and Miriam, would not have been wise, for the people to see. But with Moses being the meek and humble man that he was, it was unlikely that he would have done anything to reprimand his siblings. But know that the Lord always take care of His own. After the Lord had heard that Aaron and Miriam was complaining about Moses and his wife, He stepped in, so Moses didn't have to.

"When a prophet of the Lord is among you, I reveal myself to him in visions; I speak to him in dreams. But this is not true of my servant Moses; he is faithful in all my house. With him I speak face to face, clearly and not in riddles; he sees the form of the Lord. Why then were you not afraid to speak against my servant Moses?" -- Numbers 12:6-8

Now after the Lord had said these words to them, the cloud lifted from whence it came, and after it had left, there stood Miriam, leprous like snow. Aaron then turned towards her, and saw that his sister had leprosy, and it's during this time, he pleaded with Moses: "Please, my lord, do not hold against us the sin we have so foolishly committed. Do not let her be like a stillborn infant coming from its mother womb with its flesh half eaten away." -- Numbers 12:11-12

Then Moses pleaded with God, on Aaron's behalf, to restore her. And God responded by saying these words: "If her father had spit in her face, would she not have been in disgrace for seven days? Confine her outside the camp for seven days; after that she can be brought back." -- Numbers 12:14

Now that Miriam was confined outside the camp for the required seven day period, the Hebrew people did not move forward, not until she was restored. And after the Hebrews arrived at the Desert of Zin, and settled into Kadesh, we find that Miriam died and was then buried.

Note: Although we have a record of an event, where Miriam was a murmurer, and she was punished by the Lord, because of her actions. And in spite of her many flaws, We find that she still, was very instrumental in the development of Israel. She was a prophetess, and a faithful servant, that song praises about the wonderful works that the Lord had done before them.