"Is not through every living creature, and through every celestial body of light, is not God made visible? I hope and pray, that you will have the type of faith, that will give you the confidence and courage to open your hearts and minds, so that you can embrace this reality."

Acts 13:44-48 states: "On the next Sabbath almost the whole city came together to hear the word of God. But when the Jews saw the multitudes, they were filled with envy; and contradicting and blaspheming, they opposed the things spoken by Paul. 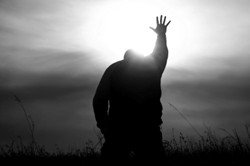 "Then Paul and Barnabas grew bold and said, 'It was necessary that the word of God should be spoken to you first; but since you reject it, and judge yourselves unworthy of everlasting life, behold, we turn to the Gentiles.

"For so the Lord has commanded us: 'I have set you as a light to the Gentiles that you should be for salvation to the ends of the earth.'

"Now when the Gentiles heard this, they were glad and glorified the word of the Lord. And as many as had been appointed to eternal life believed."

Know that Radical Faith believes in God's Word, even when what He said, is not what you wanted to hear.

Know that Radical Faith believes in God's Words, even when He says go, and I'll tell you where when you get there.

Know that Radical Faith believes in God's Word, even when He says give, even when you say you don't have it to give.


For when you believe in a faithful God, your belief should be effortless and void of all doubt. Believing in the Almighty God, should constantly place us in a state of undeniable awe. Believing in our Heavenly Father, should come natural to us, like breathing. But unfortunately, for most, in order for one to believe, they require a sign, or some sort of miracle. Today I challenge you to just stand steadfast in Christ, and believe in God and His awesome Word -- Amen.