"The main thing in this world, deals with not only being sure what God's will is, but seeking it sincerely; and upon doing so, following what we do understand of it. For I hold true to the notion, that the only possible answer to the destiny of man, is to seek without respite, when it comes to fulfilling God's purpose."

Acts10:33-35 states: "So I sent for you immediately, and it was good of you to come. Now we are all here, in the presence of God, to listen to everything the Lord has commanded you to tell us. Then Peter began to speak: 'I now realize how true it is, that God does not show favoritism, but accepts men from every nation who fear Him, and do what is right.'"

Now in the bible, there are many accounts of Christians who were united, when it came to serving in the ministry of Jesus Christ.

For example, here's a few: 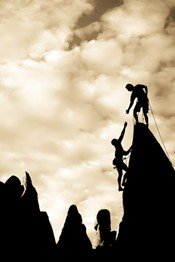 2) A man gives his donkey away, so that the Lord Jesus Christ can make a triumphal entry into town:

"Now when they drew near Jerusalem, and came to Bethphage, at the Mount of Olives, then Jesus sent two disciples, saying to them...

"Go into the village opposite you, and immediately you will find a donkey tied, and a colt with her. Loose them and bring them to Me.

And if anyone says anything to you, you shall say, 'The Lord has need of them,' and immediately he will send them." -- Matthew 21:1-3

3) A woman washes the feet and anoints the body of the Lord Jesus Christ, who's still alive and well: "And when Jesus was in Bethany at the house of Simon the leper, a woman came to Him having an alabaster flask of very costly fragrant oil, and she poured it on His head as He sat at the table ." -- Matthew 26:6-7

4) A man provides the upper room of his home to strangers so that they may eat the Passover meal together : "Now on the first day of the Feast of the Unleavened Bread the disciples came to Jesus, saying to Him, 'Where do You want us to prepare for You to eat the Passover?' And He said, "Go into the city to a certain man, and say to him, 'The Teacher says, "My time is at hand; I will keep the Passover at your house with My disciples."'" -- Matt 26:17-18

Know That You've Been Called

Understand that I hold true to the notion, that these four examples, does a good job of revealing the obedience of the Lord's servants, when it came to their ministry; and how they were united in Christ, when it came to their servitude for the Lord. Notice how their records don't necessarily indicate, if they were being led by the spirit of the Lord. But take heed to the fact, that we're also not told, if God had sent them special instructions through an angel, or some other type of divine visitation.

All we know, is that when called upon, they were ready to serve. And their acts of obedience, have been recorded from within the Word of God, as those who were willing to serve in their works for the Lord, without doubting. For you see, there are many of us, who know we've been given a task by God to fulfill; nothing has been written down, when it comes to that task; nothing has been given to them, that would help to guide them through their mission; nothing has been spoken to them, by any person or angelic being, in regard to what they have set out to do, when it comes to their calling.

And yet we find, that in spite of this, they still have a thirst and hunger that's stirring on the inside; a burning desire and passion that keeps on driving them, when it comes to them completing the work, that the Lord has called them out to do.

Pressing Forward No Matter What

And even though, trouble may seek to destroy them, know that they still move forward in their calling. For some have been weighed down with such things, like abuse, neglect, self-loathing, and depression. But their desire, when it comes to fulfilling the task that has been set before them, still remains strong, from within their hearts and minds. For you see, nothing seems to be more important, or more satisfying; more real, or more necessary, than the completion of the work that has been placed from within.

And it's for this reason, I'd like to think that they're truly able to approach their calling without hesitation and doubt. Brethren I employ you, to always press yourself to unite with Jesus Christ. Make sure that you constantly strive to be dedicated to the ministry, that keeps you up at night, and wakes you up early in the morning -- Amen.