"For if you refuse to let them go, and still hold them, behold, the hand of the Lord will be on your cattle in the field, on the horses, on the donkeys, on the camels, on the oxen, and on the sheep a very severe pestilence.'" - Exodus 9:2-4

This "condition" required the Israelites to pay homage to their God from within the Egyptian kingdom and not in the wilderness: "Then Pharaoh called for Moses and Aaron, and said, 'Go, sacrifice to your God in the land.'" - Exodus 8:25 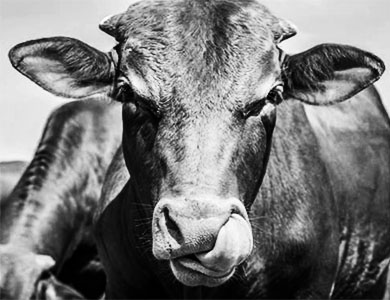 But Moses would quickly remind Pharaoh that there would be no type of compromise, when it came to how the Israelites would serve their God: "And Moses said, 'It is not right to do so, for we would be sacrificing the abomination of the Egyptians to the Lord our God. If we sacrifice the abomination of the Egyptians before their eyes, then will they not stone us? We will go three days' journey into the wilderness and sacrifice to the Lord our God as He will command us.'" - Exodus 8:26.27

However, Pharaoh wasn't happy with this response from Moses, but there was nothing that the Egyptian ruler could do if he wanted some relief from the "plague of flies" that was now wreaking havoc upon his land. So he gave Moses the impression that he had finally yielded his stance by fully agreeing to Moses' demands: "And Pharaoh said, 'I will let you go, that you may sacrifice to the Lord your God in the wilderness; only you shall not go very far away. Intercede for me.'" - Exodus 8:28

Notice how I use the phrase earlier "gave the impression" for we will soon learn that once again (even after Moses' strict warning): "Then Moses said, 'Indeed I am going out from you, and I will entreat the Lord, that the swarms of flies may depart tomorrow from Pharaoh, from his servants, and from his people. But let Pharaoh not deal deceitfully anymore in not letting the people go to sacrifice to the Lord." - Exodus 8:29

Pharaoh would again, renege on his word: "But Pharaoh hardened his heart at this time also; neither would he let the people go." - Exodus 8:32

And although Pharaoh had lied so he could receive some immediate relief from the current plague that was brought against his kingdom, the Egyptian ruler would soon realize that his deception didn't fool God.

But in spite of this, the Lord did give Pharaoh a chance to be a man of his word: "Then the Lord said to Moses, 'Go in to Pharaoh and tell him, "Thus says the Lord God of the Hebrews: 'Let My people go, that they may serve Me. For if you refuse to let them go, and still hold them, behold, the hand of the Lord will be on your cattle in the field, on the horses, on the donkeys, on the camels, on the oxen, and on the sheep a very severe pestilence.'" - Exodus 9:1-3

Keep in mind that although this was officially the fifth plague that was brought against the Egyptians at this time, this was still God's "sixth judgment blow" when we look at the whole "judgment process" from within this recorded account. Also, know that the God of Israel would continue to raise the stakes while He continued to keep it personal when it came to the "judgment plagues." The Lord did this; by putting a strong emphasis, that deals with separating those (Israelites) who are serving in His covenant from those (Egyptians) who are serving the world:

Who Was God Targeting?

Now, before we go further, I'd like to point out that the "pestilence" in which God is referring to is normally taught as being some highly infectious cow disease that is possibly known as "murrain." Some Bible teachers like to teach that God targeted the Egyptian cattle to punish the wealthy Egyptians.

And although this makes for good "political talk" as well as being slightly possible. Personally, I'm sticking to the perception that the Egyptian cattle were targeted; because the Egyptians had already deified the cow. Read that again if you have to. And this was done possibly through the worship of Bata or Hathor, the Cow goddess.

Now I would like to point out that these goddesses were perhaps the same. Understand that I'm not going to go into great detail when it comes to their mythology. But know that Bata came well before Hathor. Also, understand that the similarities between the two deities were so close that it's very well possible that the two goddesses had eventually become seen as one, even though they had started separately.

But I find it interesting that Bata, or Hathor, seems to fall out of the consensus of opinion when this part of the record is taught amongst us Christians. However, most Bible teachers seem to focus on the very popular "bull deity" known as Apis. This bull was seen as an incarnation of the very popular "creator god" that was known as Ptah. But if you're going to talk about Apis, you would think that one should also include the "bull deity" that was known as Buchis - who was also worshiped in the same manner as Apis. Know that Buchis's face was completely black, and the rest of his body was white.

And even though archeology hasn't been too kind to another "bull deity" that was known as "Mnevis." Especially when it comes to finding evidence and information the same as it has for Apis and Buchis, this particular deity still would have to be seriously considered when this record is being taught.

Know that Mnevis was known as "The Great Black" simply because his body (as the name would suggest) was completely black. However, as we move forward, it's clear that the Egyptians had held their cattle in very high regard, and because of this, the challenge was made, and the Almighty handed down judgment.

This Is Serious Business

I would also point out and remind you (like I stated earlier) that God would continue to put an emphasis on how personal this matter was to Him: "And the Lord will make a difference between the livestock of Israel and the livestock of Egypt. So nothing shall die of all that belongs to the children of Israel." - Exodus 9:4

Know that whenever it comes to those who have decided to enter into God's covenant. Remember, the Israelites inherited it through the Abrahamic Covenant, and because of the great sacrifice that Jesus (Yeshua) Christ had made on our behalf, we, too, have the opportunity to come into the covenant that is now in play. This is God's New (Blood) Covenant. The Lord takes it very personal when those who have decided to follow Him come under attack, especially by those (worldly slaves) who have chosen to oppose Him.

At this point, God is making it quite clear to Pharaoh and the Egyptians that these plagues aren't some rare fluke that's happening from within what most would refer to as "mother nature." God wants to make it clear that this is all happening by His Hand and by His Hand alone. No, my friend, this is no fluke - this is serious business.

In the following article, we will see if God points to a specific time when this plague occurred or when this prophecy will be fulfilled. Also, will Pharaoh continue to stand his ground against the Almighty? The move is now Pharaoh's to make - what will he do?

Moses & the Swarm of Flies Plague

175) Although Exempted - They Still Endured

185) The Lord Giveth and Taketh