The Son of Levi?

Now there's no doubt, that the searches for the male children were intensifying, and perhaps, Amram and Jochebed's faith were beginning to wane because of it. So this is why we find, that "she took an ark of bulrushes for him, daubed it with asphalt and pitch, and put the child in it, and after doing so, she laid it in the reeds by the river's bank, and the baby's sister, stood afar off, to know what would be done to him."


In the last article we'd learned, how Shiphrah and Puah (for they were the head Hebrew midwives that Pharaoh had used, when he wanted to carry out his wicked birthing plan amongst the Israelites) had decided to defy Pharaoh, by refusing his orders, instead of going against the Almighty God: "Know that the midwives feared God, and it's for this reason, they did not do as the king of Egypt had commanded them. But what they had done instead, was to have saved the male children from being killed." -- Exodus 1:17 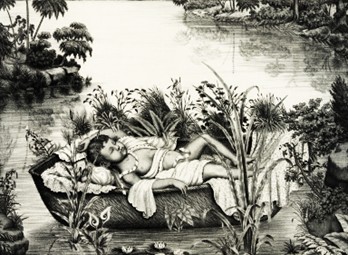 Know that Shiphrah and Puah were courageous, when they'd decided not to go against the God of their forefathers.

For they didn't want to risk compromising their positions with the Most High -- in order to please Pharaoh.

And they made this defiant stance, knowing that their current positions, and the favor they had earned with the mighty Pharaoh, would be in serious jeopardy, if they weren't successful with carry out his wicked plan against the Israelites. But needless-to-say... they didn't care. For Shiphrah and Puah knew, that it wasn't worth incurring the wrath of the Lord, in order to please mankind.

And obviously, Pharaoh was not happy with their decision, when it came to them disobeying him. Now I also want you to keep in mind, that Pharaoh didn't really know their real reasons, when it came to why they couldn't carry out his birthing edict that dealt with the killing of the male Hebrew babies. And the reason why this was, dealt with the fact, that Shiphrah and Puah had lied to Pharaoh after he had confronted them: "Why have you done this thing! Why did you save the lives of the male children?" -- Exodus 1:18


Shiphrah & Puah: They Were Both Smart & Wise?


And after hearing this from Pharaoh -- Shiphrah and Puah answered by saying:  "Because the Hebrew women are not like the Egyptian women; for they are lively and give birth before the midwives come to them." -- Exodus 1:19

Nonetheless, it would appear that Pharaoh would believe Shiphrah and Puah's excuse, for we do not find, that he had attempted to punish them in any kind of way. But the Sacred Record does reveal, that Pharaoh would not be deterred by this major setback, when it came to his persecution campaign against the Israelites and their babies. For we now find, that he would immediately put forth this decree: "So Pharaoh commanded all his people, saying: 'Every son who is born unto the Israelites, you shall cast into the river, and every daughter that is found among them, you shall save alive.'" -- Exodus 1:22


The Advantage of the Sacred Record?


So this is where this article now picks up at. For we find, that from out of the murdering chaos that is now ensuing from within the Egyptian kingdom, when it came to the Israelites and their babies. Often times I find myself wondering, that when it comes to one, having to deal with such an environment, like the one the Israelites had to endure -- there's no doubt in my mind, that when a person comes across this record, that they would say themselves: "Where is God? Why wasn't He in the midst of all of this, protecting His people? Why is He allowing all of this to happen?"

And once again, we find that having the advantage of the Sacred Record, shines through mightily, when it comes to providing us the much needed insight that's needed. For upon closer examination, one should be able to see, how God is still operating from within this massive persecution campaign that's happening against the Israelites and their babies.

First off, notice how the Sacred Record switches from the Israelites current ordeal -- to the record that deals with the birth record of Moses: "Now a man from the house of Levi, went and took as his wife, one of the daughters of Levi. Soon after, the woman conceived and bore him a son. And when she saw that her newborn son was a beautiful child, she hid him from Pharaoh, for three months." -- Exodus 2:1,2


Okay now real quick, let's take a look at what this particular Scripture is implying, when it comes to Moses parents. First the "man of the house" would be Amram (for he was the son of Levi's son Kohath.) Now I point this out, because I know that phrase: "...the son of Kohath, the son of Levi" may read in a weird way. But when it comes to Kohath -- understand that he was the second son born unto Levi. So basically, the Sacred Record is making it clear, that Amram was definitely from the tribe of Levi.

Now I want you to know, that this is extremely important. For the Sacred Record is revealing to us, how God is using the Levitical priesthood from within the early stages of Israels development as a nation. Now I'll explain more, when it comes to this viewpoint, as we continue our journey throughout the Exodus record. But for right now, I want to point out -- that Amram was also, the father of Moses' other two siblings: Aaron and Miriam. Know that by this time, Aaron and Miriam were already born unto Amram and his wife. Now again, Amram's wife, is one of the daughters of Levi in which the Scared Record mentions, who went by the name Jochebed.


I Wonder: Were Amram & Jochebed Siblings?

However that may have been, we begin to move forward a little bit more...

Now it would seem, that Amram had married his sister if you were to read the Scripture as is. But know that this was not the case, for if it was, Amram would had been going against the customs of the Israelites. Know that one must be willing to take a closer look, in order to get a clearer assessment, when it comes to their relationship, before Amram and Jochebed had gotten married.

So therefore the point that I'm trying to make, is that there's a good chance, that the word "daughter" in this case, is being used in reference, to the word "cousin" -- just as the word "brother" is commonly used, in the same sense throughout the Sacred Record. Ahem, now I took the long way around, in order to present the notion, that Amram and Jochebed were possibly cousins. And not necessary brother and sister -- or auntie and nephew -- as some would like to teach and preach.


Take Heed: The Egyptians Are Coming?

Now remember that at the end of that particular Scripture -- we're told, that Jochebed had hid the baby Moses for three months. But now we have come to a point from within the Sacred Record, where this was no longer possible: "But when she could no longer hide him, she took an ark of bulrushes for him, daubed it with asphalt and pitch, and put the child in it. And after doing so, she laid the ark in the reeds by the river's bank. And the baby's sister stood afar off, in order to know what would be done to him." -- Exodus 2:3,4

Now what this Scripture reveals, is that at this time, the Egyptians were still carrying out the bloody decree that Pharaoh had put forth some months before. For we find, that the Egyptians were still searching, and executing the male Israelite children, who were born after Pharaoh had given the command. Now keep in mind, that the child (who is known as Moses) is now getting older, and it's for this reason, why it would have been harder for Jochebed to hide him amongst her people and the Egyptians, who'd still dwelt among them at this time.


Now there's no doubt, that the searches for the male children were intensifying, and perhaps, Amram and Jochebed's faith were beginning to wane because of it. So this is why we find, that "she took an ark of bulrushes for him, daubed it with asphalt and pitch, and put the child in it, and after doing so, she laid it in the reeds by the river's bank, and the baby's sister, stood afar off, to know what would be done to him."

Now again, Moses' sister at this time, would had been a young Miriam. And as we just learned, she was compelled to watch her brother, in order to see what was going to happen to the basket that was carrying her little brother. For she didn't want the ark (basket) to be accidentally overturned by the currents of the river, or even worse, come into harms way of some large crocodile. Know that Miriam would also watch, in order to see who would pluck the basket from the river, therefore rescuing the baby.


In the next article we'll find out, who it might have been, that ended up rescuing the baby Moses from the river. We'll also learn, if his rescuer will keep him from harm, or will they follow Pharaoh's decree, by turning him in, or even worse, do as the decree instructs -- kill him? Also... what part would God play, if any, from within this whole bloody ordeal?


Joseph the Overseer of Egypt