"Since God has made all this known to you, there is no one so discerning and wise as you. You shall be in charge of my palace, and all my people are to submit to your orders. Only with respect to the throne will I be greater than you. I hereby put you in charge of the whole land of Egypt."


In the last article we'd learned that after Pharaoh had sent for Joseph... the Egyptian ruler was more than ready to tell Joseph about the troubling dreams that he had, just a few days before. So when Joseph had finally came before him, Pharaoh asked Joseph a question: 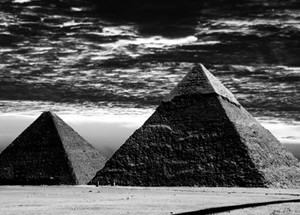 And after hearing Pharaoh's question, Joseph responded by saying:

So therefore, after Pharaoh had heard Joseph's response, he went ahead and told him about the dreams. And just like Joseph had told Pharaoh earlier, God would use him, to give the Egyptian ruler the interpretations to the troubling dark dreams that had bothered him so.


Now, when it came to the interpretations that Joseph had given to Pharaoh... know that they were both good and bad? First we find, that Joseph would tell Pharaoh about the seven years of abundance that Egypt would enjoy:

But immediately after the seven years of abundance would end, there would be seven more years of absolute famine:


Now after Joseph had given Pharaoh these interpretations -- next we find, that Joseph would go farther? For it would be at this point in time, that Joseph follows his interpretation of Pharaoh's dreams with some divine wisdom. For he reveals to Pharaoh -- a plan that was geared towards helping, and preparing the country of Egypt for the next fourteen years? For the Egyptians would soon learn, that the next fourteen years of their existence, would yield the type of experiences that they have never experienced before as a nation:

"And now let Pharaoh look for a discerning and wise man and put him in charge of the land of Egypt. Let Pharaoh appoint commissioners over the land to take a fifth of the harvest of Egypt during the seven years of abundance. They should collect all the food of these good years that are coming and store up the grain under the authority of Pharaoh, to be kept in the cities for food. This food should be held in reserve for the country, to be used during the seven years of famine that will come upon Egypt, so that the country may not be ruined by the famine." -- Genesis 41:33-36

And make no mistake, these events that are about to take place, would be so out of the ordinary, that they would forever change Egypt's course of history.


The Seven Years of Abundance -- Pharaoh Would Be Proud?


But before we go further, let's take a moment, to take a closer look at what Joseph had just interpreted for Pharaoh:

"It is just as I said to Pharaoh: God has shown Pharaoh what He is about do. Seven years of great abundance are coming throughout the land of Egypt, but seven years of famine will follow them. Then all the abundance in Egypt will be forgotten, and the famine will ravage the land. The abundance in the land will not be remembered, because the famine that follows it will be so severe. The reason the dream was given to Pharaoh in two forms is that the matter has been firmly decided by God, and God will do it soon." -- Genesis 41:28-32

Know that when it comes to the "seven years of abundance" that Joseph mentions -- understand that it wouldn't necessarily seem to be out of the ordinary for a person with Pharaoh's mindset? And personally I like to think that perhaps the Egyptian ruler would have expected nothing less, when it came to the type of results that the coming "seven years of abundance" would produce? And if the next seven years were to have happened (just like the name is indicating) Pharaoh would have just given credit to the many different deities that Egypt were serving at the time.


The Famine of Seven Years -- Taking A Closer Look?


But on the other hand, when it came to the "famine of seven years" that were to follow... know that this would be something that would be out of the ordinary, and very unexpected for a land that was designed like Egypt? For we must understand, that Egypt had been cultivated with an irrigation system, that had kept it from having to depend on rainfall. Know that the type of irrigation system that the land had develop, allowed it to produced crops regardless of the weather.

Understand that the irrigation system that I'm referring to, was setup in such a way, that the land of Egypt would get its water and much needed sediment for fertilizer, from the yearly overflow of the Nile River. So this basically meant, that this "seven year famine" would be so severe and widespread, that it will eventually cut Egypt completely off from the Nile River. Now even Pharaoh himself, would have to consider this type of event... hard to believe, and totally out of the ordinary.


So Who Will Be The One?


Now as we move forward -- we're now told, that Pharaoh and his officials, thought the plan that Joseph had just proposed when it came to the preparation and survival of Egypt... seemed very good and sound. But now that brings us to the question that was on Pharaoh's mind: "And Pharaoh said to his servants, 'Can we find such a one as this, a man in whom is the Spirit of God?'" -- Genesis 41:38

The Egyptian ruler would then turn to Joseph: "Since God has made all this known to you, there is no one so discerning and wise as you. You shall be in charge of my palace, and all my people are to submit to your orders. Only with respect to the throne will I be greater than you. I hereby put you in charge of the whole land of Egypt." -- Genesis 41:39,40

And after Pharaoh had announced that Joseph would be the new Prime Minister of State -- he took his signet ring from his hand and placed it on Joseph's finger. Know that this action that had just taken place by the Egyptian ruler was very important, since it was an official confirmation of Joseph's new commission from within the land of Egypt.


Learning to Look Beyond?


Now lets take a moment and really digest what just happened? understand that we've been learning, that Joseph had been through quite a lot, when it came to his life. Also keep in mind that Joseph's unexpected season of hardship, had stemmed from the unfair treatment that had constantly came from his brothers. I mean after all, Joseph was a good person overall, and for him to have to endure the things that he did, just didn't seem right. Personally, I believe that these are the type of experiences that can cause people to fall away from God -- instead of seeking a closer relationship with Him.

And because of this, we shouldn't be surprised, if it causes one to bring forth the question and ask: "Why is God allowing these things to happen to such a good person?" And I for one, would have to be honest, and admit that the question is valid. But I believe that a person has to have a certain type of perception, when one tries to fully understand the Lord and His plans for them?

For we must learn how to look beyond our natural perception (and understanding) of things, by bringing into view, the overall purpose of our current situation (or dilemma), that God is taking us through. And I know that this approach is not as easy as it reads, from within this article... being that at times, the view and the scope of the season that we may be enduring -- could be so vast, that it becomes extremely difficult, to be able to see across its entire range, when it comes to trying to fully understand, what God is doing in our lives at that particular time.


And this is why, when it comes to those, who aren't able (or willing) to do this particular approach that I'm suggesting -- causes one to start looking for a different path. A path that seems to be fair and far easier to travel. But often times, were so blinded by the chaos that surrounds us, that we don't realize, that the more we travel down that alternate (worldly) path, the more we find ourselves coming away from God. And when one finds themselves apart from God -- that person will quickly realize, that life is far more difficult to bear. And make no mistake, it's better to be with the Lord -- than to be apart from (or against) Him.

We have to make sure that we don't let what seems to be a tough haul, to deter us from the arms of our Heavenly Father. Always remember, that often times it takes hard work, pain and sweat to reach a level of success that one desires. And one of the things that we can learn from Joseph and his overall ordeal, is that no matter what, he always tried to represent God the best way he knew how.

And most importantly, he didn't blame God for his afflictions and hardships, even tough he didn't quite understand why he was having to endure them in the first place. And because of this, he'd stayed in God's favor and was successful in all that he did, in spite of his current ongoing situations.

Now that Joseph has been made overseer over Egypt -- now what? Joseph gets a new name with a certain meaning? Also could marriage and having his own family, be in the near future for Joseph as well?