He Didn't Feel Worthy Enough - To Die Like Christ

Andrew was introduce to Christ, when the Lord had just begun to call his first fruits, when it came to his inner circle of disciples. It was also at this time, John the Baptist had just started announcing that Jesus was the Lamb of God, and how He will take away the sins of the world. There were two men, who were John's disciples at the time, who had witness this statement personally. Andrew would be one, but the other, unfortunately, was not named at that time. Now it's possible, the unnamed disciple that was following John the Baptist at the time, could have been one of three men. 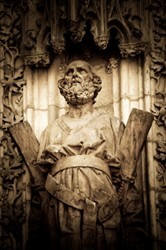 For you see, two of the men I'm referring to were brothers, who too, would eventually come into Jesus' inner circle. These men were known as: The sons of Zebedee. They'd went by the names James and John. And a possible third, could have been Thomas.

Nevertheless, this is speculation. But we do know for certain, is that Andrew was definitely one of the two.

So as far as this article is concerned, Andrew is all that matters at this particular moment. Now there's not much that we know, when it comes to Andrew the Apostle.

But what we do know, just like I'd mentioned earlier, is that he was one of the first disciples that had followed John the Baptist, and that he was also the younger brother of Peter the Apostle.

Now I also would like to point out, Andrew and Peter were both fishermen. They came from a town that was known as Bethsaida. This town was located by the Sea of Galilee near the northeast side. Know that Andrew was one of the twelve disciples that Jesus had commissioned, when it came to going out and driving out the evil spirits they'd came across, as they'd healed every disease and sickness that was afflicting all those, who had came across their path: "And when He had called His twelve disciples to Him , He gave them power over unclean spirits, to cast them out, and to heal all kinds of sickness and all kinds of disease." -- Matthew 10:1

Now I also want to point out, Andrew was an eye witness, when Jesus had fed the five thousand at the Sea of Tiberias. Now the place I'm referring to was located on the eastern border of Galilee. In fact, Andrew was the one who brought the boy to Jesus. For the boy had five small barley loaves and two small fish with him. Jesus would use what the boy had on him, to feed the five thousand, with plenty to spare, after everyone had their fill.

He was also that disciple, Philip had went to go get, when the Greeks had asked Philip to grant them an audience, when it came to meeting with the Lord Jesus Christ. For it was at this moment, Philip and Andrew went ahead and introduced the Greek visitors to Jesus. And this is where we're treated with an awesome account that deals with the people who were gathered around Jesus at the time, bearing witness to hearing the voice of God, as He'd spoke to Christ from the heavens.

Those who had heard it, truly believe that this was the voice of God coming from the heavens, a voice that was glorifying His name. The event was so powerful, the people that were there at the temple on that day, thought it might have been thunder, or an angel that had spoken, for they all were very sure they heard it.

We also find that Andrew was one of the four, who'd asked Jesus privately, when it came to a statement he had just made, when it came to the end of time, while Christ was sitting on the Mount of Olives. This happened right after Jesus had said these words: "Do you see all these great buildings?" replied Jesus. "Not one stone here will be left on another; every one will be thrown down." -- Mark 13:2

Now after hearing these words, this is when the four, which consisted of Peter, James, John, and Andrew had asked Jesus: "Tell us, when will these things happen? And what will be the sign that they are about be fulfilled?"

This was a question that Jesus had to admit that He, or the angels, did not have the answer to Andrew's question. For the Sacred Record had confirmed, Jesus didn't have the answer. But Jesus did tell them, the only One that could answer their question, was the Heavenly Father. But in spite of this, Jesus would follow His statement with a word of caution. For Christ wanted them to know about some key events. Now you can read what Jesus said about those events at: Mark 13:5-31

Nevertheless, after Jesus had spoken about these key events, He followed it up with this statement: "No one knows about that day or hour, not even the angels in heaven, nor the Son, but only the Father. Be on guard! Be alert! You do not know when that time will come. Its like a man going away: He leaves his house and puts his servants in charge, each with his assigned task, and tells the one at the door to keep watch.

"Therefore keep watch because you do not know when the owner of the house will come back - whether in the evening, or at midnight, or when the roster crows, or at dawn. If he comes suddenly, do not let him find you sleeping. What I say to you, I say to everyone: Watch!" -- Mark 13:32-37

The Martyrdom of Andrew

Now I will bring this article to a close, by mentioning how Andrew was martyred. First off, there's not much known about his death. But it's rumored that Andrew ended up taking his ministry into places like, Cappadocia and Bithynia. It's also rumored, Andrew traveled to places like the Scythian deserts, Eprius and perhaps Hellas as well.

We have also learnt that Andrew's martyrdom had taken place after he'd arrived in Edessa, somewhere around 60 A.D. which was during the reign of Nero. Rumors also suggest, Andrew did not want to be killed on the same type of cross that Jesus was crucified on. The reason behind this, dealt with the idea, Andrew felt like he wasn't worthy enough, to die the same way Christ did.

Now we also learnt, it was Andrew who had requested a different cross, which at the time was called the: Decussate Cross. Now this type of cross, was found to be in the shape of an 'X'. Now keep in mind that the Roman cross, also represents the number ten. Just throwing a little extra information at you.

Nevertheless, after the martyrdom of Andrew had happened, the Decussate Cross from that point forward, was known as the: Saint Andrew's Cross. And this would be the cross from this point forward that was widely used, for persecuting Christians during the medieval times. Also know, since Andrew was a patron Saint of Scotland, the Saint Andrew's Cross would eventually be adopted as the national cross of Scotland. Also note, Latin and Greek churches recognizes the 30th day of November, as a Holy Day which is held in honor, of Andrew the Apostle.