One of the Seventy Two

First, I want to point out that much is not really known, when it comes to Matthias. But the little we do know, deals with the fact, he would be the one that would eventually be elected, when it came to replacing Judas. Remember, Judas was the disciple that had betrayed Jesus, for thirty pieces of sliver: "Then Judas, His [Jesus] betrayer, seeing that He had been condemned, was remorseful and brought back the thirty pieces of silver to the chief priests and elders, saying, 'I have sinned by betraying innocent blood.'" -- Matthew 27:3,4

We also know that the name "Matthias" signifies: "gift of God." Matthias would also be placed in the group of the seventy two disciples. Remember, this was the group Jesus had sent out before him: "After this the Lord appointed seventy two others and sent them two by two ahead of him to every town and place where he was about to go. These were his instructions to them: 'The harvest is so great, but the workers are so few. Pray to the Lord who is in charge of the harvest, and ask him to send out more workers for his fields.'" -- Luke 10:1,2 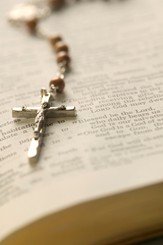 Now for me personally, I think this is interesting to know, being that we'd always heard about the twelve disciples, for they were the ones who always traveled in Jesus' inner circle.

But to know that Jesus was using others, when it came to helping Him in His ministry, reveals just how far reaching Christ ministry truly was.

For there's hardly anything that's mentioned, when it comes to the seventy-two disciples that Jesus had sent out ahead of Him

Be that as it may, when it comes to these seventy-two disciples, understand that this was a group of men who'd worked courageously and tirelessly behind the scenes.

Know that Jesus had sent them out ahead of Him, two-by-two. He'd sent them out to every place and town, He was planning on visiting, with specific instructions:

"The harvest is plentiful, but the workers are few. Ask the Lord of the harvest, therefore to send out workers into his harvest field. Go! I am sending you out like lambs among wolves. Do not take a purse or bag or sandals; and do not greet anyone on the road. When you enter a house, first say, 'Peace to this house.' If a man of peace is there, your peace will rest on him; if not, it will return to you. Stay in that house eating and drinking whatever they give you, for the worker deserves his wages. Do not move around from house to house." -- Luke 10:2-7

Now it would be during these days, we'd had learnt, Peter had stood up among the group of believers, which at the time, numbered to be around 120. It would be, also at this time, Peter had told them about the disciple Judas, and how he had betrayed Jesus. Peter spoke about how Judas had went and brought himself a field, with the money he had earn for his betrayal against his beloved Teacher.

Peter continues to tell them, how Judas afterward, hung himself in the same field, he had brought. And after doing so, Peter spoke about how Judas body had burst open, therefore ripping his gut, causing his intestines to spill out in the process. And after everyone in Jerusalem had heard about this horrific tragedy, they named that field: "The Field of Blood."

And it would be at this time, we have Peter confirming that this group, was simply known as "the seventy-two disciples." Peter also reveals, how they were with Jesus from the very beginning of His ministry. And how they were with Him, all the way up, to when He actually ascended to the Eternal Kingdom: "Therefore it is necessary to choose one of the men who have been with us the whole time the Lord Jesus went in and out among us, beginning from John's baptism to the time Jesus was taken from us. For one of these must become a witness with us of his resurrection." -- Acts 1:21-22

And after Peter had said this to those, who were gathered around listening. They had proposed that the choice to replace Judas, should be between two men. One which was named Joseph, who was also known as Barsabbas, who also went by the surname "Justus" and the second person was called Matthias:

"And they proposed two: Joseph called Barsabas, who was surnamed Justus, and Matthias. And they prayed and said, 'You, O Lord, who know the hearts of all, show which of these two You have chosen to take part in this ministry and apostleship from which Judas by transgression fell, that he might go to his own place.'" - Acts 1:23-25

Now after they had made the decision that the final choice would be between these two men, they then prayed to the Lord asking Him to show them which one, out of these two, He'd preferred. Then they cast lots and the lots fell to Matthias, who was then added to the eleven apostles: "And they cast their lots, and the lot fell on Matthias. And he was numbered with the eleven apostles." - Acts 1:26

Now when it comes to the martyrdom of Matthias, much is not known, but rumor has it, Matthias had been stoned in Jerusalem, and soon after he was stoned, he was then beheaded.