Page One-Hundred and Four
Goshen
The Importance of this Region

"When Pharaoh calls you in and asks, 'What is your occupation?' You should answer, 'Your servants have tended livestock from our boyhood on, just like our fathers did.' Then you will be allowed to settle in the region of Goshen, for all shepherds are detestable to the Egyptians."


In the last article we'd learned, that Jacob after some twenty plus years had found out, that his long lost son Joseph was still alive. And even though Jacob hadn't yet physically seen his son Joseph -- just the mere thought of him being alive, immediately brought peacefulness and joy, to Jacob's mind and heart. 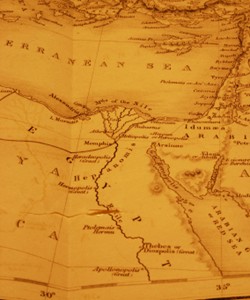 But the good news wouldn't end with Jacob learning about Joseph -- for he would also learned, that Joseph had now held, a very powerful position down in Egypt:

And this was why Joseph also had the authority, to invite Jacob's entire family, to come and stay with him down in Egypt.

And needless-to-say, Jacob would end up accepting Joseph's relocation offer.

Now when it came to Jacob agreeing to relocate to Egypt, know that this would be a very wise decision on Jacob's part. Especially since the seven year famine was still wreaking havoc. Nonetheless, Jacob would pack up his family, along with their belongings and head out towards Egypt. And while he was en-route, he would end up stopping off at a place that was known as Beersheba.


Now it would be here, at Beersheba, that Jacob would take the time to offer up sacrifices, to the Most High God. For it would also be at this point, that God would end up visiting Jacob later that night, and it would be during this visitation, that the Lord would officially give Jacob His approval, when it came to him going down to dwell in land of Egypt:

"So Israel [Jacob] set out with all that was his, and when he reached Beersheba, he offered sacrifices to the God of his father Isaac. And God spoke to Israel in a vision at night and said, 'Jacob! Jacob!' "Here I am," he replied. 'I am God, the God of your father,' he said. 'Do not be afraid to go down to Egypt, for I will make you into a great nation there.'" -- Genesis 46:1-3

Now I'd like to think, that this would be a crucial moment for Jacob -- for it wouldn't have been wise, for him to make such a move (even though initially he did) without consulting God first. And personally, I think Jacob would have probably went to Egypt anyway, even if the Lord would have disapproved -- for he'd loved Joseph too much. For we must remember, that Joseph was Jacob's favorite son, before the two were ripped away from each other, through the jealously of his other sons.

However as we move forward...


We now find, that after Jacob and his family had began to move away from Beersheba -- the Sacred Record would reveal, that he would send his son Judah ahead of him. Understand that Jacob had done this, so that Judah could get directions to the land of Goshen from Joseph. And after Judah had received his instructions from his father, Judah would do as he was instructed.: "Now Jacob sent Judah ahead of him to Joseph to get directions to Goshen. When they arrived in the region of Goshen." -- Genesis 46:28

Now it's at this moment, that we find it wasn't long after Judah had received the directions to Goshen from Joseph -- that Jacob and his family finally arrive in the region of Goshen. And a short while after this had happened, Joseph would get the report that his father had arrived. And it's at this point, that Joseph had his chariot made ready, so that he could ride it down to Goshen in order to meet with his father. And once Joseph had came before Jacob, he went up and put his arms around his father, and he wept for a long time.


When it Came to Goshen?


And needless-to-say, Jacob was also moved, when he'd finally seen his son Joseph after so many years: "Now I am ready to die, since I have seen for myself that you are still alive." -- Genesis 46:30

Now after Joseph and his father had settled their emotions, Joseph would finally reveal, what he'd been planning to tell them all:

"I will go up and speak to Pharaoh and will say to him, 'My brothers and my father's household, who were living in the land of Canaan, have come to me. The men are shepherds; they tend livestock, and they have brought along their flocks and herds and everything they own.'

"When Pharaoh calls you in and asks, 'What is your occupation?' You should answer, 'Your servants have tended livestock from our boyhood on, just like our fathers did.' Then you will be allowed to settle in the region of Goshen, for all shepherds are detestable to the Egyptians." -- Genesis 46:31-34


Now I like to think, that it's important to take a brief look, when it comes to a few things that Joseph had stated, before we go forward in this account:

First off, when Joseph stated: "I will go up and speak to Pharaoh" -- Understand that this would be an important first step from within this whole process, for that particular moment could have been easily been overlooked by Joseph. For he'd already had the go ahead from Pharaoh, when it came to his family being able to dwell in the land of Egypt.

Also keep in mind, that with the position that Joseph had held from within the Egyptian kingdom, you would think that he would've been able to place his family, were he'd saw fit, without further approval from Pharaoh. But Joseph did not take this approach, for he didn't want to abuse Pharaoh's generosity, or put his family in a position, to where it may seem like they were imposing on the Egyptians -- even though he'd already had Pharaoh's consent.

For we must keep in mind, that Joseph's family will have no choice, when it came to living amongst the Egyptians for awhile -- so therefore, the place in which they were to be settled, would have to make good sense, in order to help keep the peace, between the two nations.


Next Joseph stated: "I will go up and speak to Pharaoh and will say to him, 'The men are shepherds; they tend livestock, and they have brought along their flocks and herds and everything they own.'" :

Understand that this was important, because when it came to this little bit of information, know that it would have kept Pharaoh from assigning the Israelites positions, that may have placed them from within: the king's court, army, or the cornfields. Plus, this was Joseph's way of letting them know, that they shouldn't be ashamed of whom they are -- for their trade and skills, will benefit them greatly in this situation and beyond.

This is why he instructed them to do this next: "When Pharaoh calls you in and asks, 'What is your occupation?' You should answer, 'Your servants have tended livestock from our boyhood on, just like our fathers did.' Then you will be allowed to settle in the region of Goshen, for all shepherds are detestable to the Egyptians."

Now in today's world, people would have been insulted, and had became angry, if someone thought of them as being "detestable." But ironically, in this case, the negative perception that the Egyptians would have of the Israelites -- would in fact, serve them well. Being that the overall objective, when it came to them at this point, was to get settled from within the region of Goshen.

By Pharaoh and the Egyptians not wanting anything to do with "shepherds" -- it all but guaranteed, that the two nations would be kept apart. And the Goshen region was the best place, that would have allowed that arrangement between the two nations, to happen best.


Why The Goshen Region?


I mean after all, Joseph had his reasons on why he chose Goshen in the first place. And to put it simply, it was the idea place for his people, the nation of Israel. And with Goshen being located near the outskirts of the land, the Egyptian population would had been found, to be at a bare minimum from within this area of the kingdom. And because of this, the nation of Israel would basically have the region of Goshen all to themselves.

Understand, that by helping to keep the nation of Israel apart from the Egyptian culture, it limits the influence that the Egyptians may have had, if the Israelites were to have dwelt in the midst of them. Also know, that the Goshen region was located near the borders of Canaan. And this was important, for this location would help to constantly remind the Israelites, about the land that God had promised to them and their forefathers.

Now that Joseph had instructed his family on what to say, when they would finally come before Pharaoh -- we'll see if Joseph's plan will work, and we will also see, if the Israelites will get to stay from within the region of Goshen -- just like they'd hoped they would. Or perhaps to their surprise, Pharaoh will have different plans for Joseph and the Israel nation overall?