The Importance of the Sanhedrin


Know that it was at this time, that the "Council of the Sanhedrin" had now been established -- or perhaps I should use the word: reinstituted.) Nonetheless, know that this council, would serve as some sort of "judgment chamber", or "court of justice" for the Jewish people.

In the last article as we continued to explore Jacob's prophecy about Judah a little bit further -- I'd attempted to clear up some things, in regards to how the tribe of Judah continued their representation of the "Royal Scepter" that Jacob had spoken about.

I'd like to think that this explanation is important, being that what was left of the Israel nation, had been taken into captivity by the Babylonians: "The scepter shall not depart from Judah, nor a lawgiver from between his feet, until [the] Shiloh comes; and to Him shall be the obedience of the people." -- Genesis 49:10 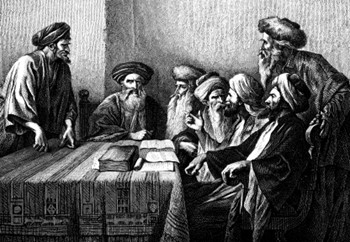 And it's for this reason, that I wanted to make Jacob's prophecy about Judah a little bit clearer.

So again, in spite of the fact, that the tribe of Judah had been forced into captivity by the Babylonians, and the city of Jerusalem had finally been destroyed.

It's important for us to remember, that it would be Daniel (who himself was of Judean noble birth), that would serve as the royal representation for the tribe of Judah, while they were being held in captivity by the Babylonians.


Understand that Daniel was able to hold this royal representation of the scepter due to the mere fact, that it was he, who had acquired and held a high royal position from within the Babylonian royal courts.

Know that Daniel would eventually obtain the position of being the "chief of the governors" from within Nebuchadnezzar's royal court. I also want you to know, that this was the third highest ranking position from within the Babylon kingdom. And the only royal officials that were ranked ahead of Daniel -- was the Babylonian king Nebuchadnezzar, and Belshazzar, the son of Nabonidus. Note: Belshazzar was married to Nebuchadnezzar's daughter Nitocris.


However that may have been, we now find ourselves moving forward, when it comes to the record that touched on Zerubbabel. Remember that it was he, who was known as the "Prince of Captivity." Also know, that he too, had came from the tribe of Judah. And after Cyrus the Great had issued his decree, from within his first year of taking over the Babylonian city, the Jews at this time were allowed to return home.


Nonetheless, we then fast forwarded about ten, or eleven years later. And it was at this point from within the Sacred Record, that we'd learned that king Artaxerxes had presented a unique opportunity for the Jews. And it would be through this opportunity, that had allowed all the Jews who wanted to go back home, the chance to do so. Understand that this is where we're introduced to the prophet Ezra. Also know, that he too, was from the tribe of Judah.

For the Sacred Record would reveal, that it was he, who'd led the next group of Jewish exiles back home to the city of Jerusalem. And although Ezra is usually thought of, as being a priest, and a prophet -- know that I'm not trying to make him out to be a king. But in spite of this, don't make the mistake of thinking that he didn't have any type of royal authority, when it came to the Jewish people:

"And you, Ezra, according to your God-given wisdom, set magistrates and judges who may judge all the people who are in the region beyond the River, all such as know the laws of your God; and teach those who do not know them. Whoever will not observe the law of your God and the law of the king, let judgment be executed speedily on him, whether it be death, or banishment, or confiscation of goods, or imprisonment." -- Ezra 7:25,26


However, after Ezra, we then moved forward to about another ten, or eleven years later. And it's at this point, where we'd discovered, that the prophet Nehemiah (who also came from the tribe of Judah) had led the third and last group of Jewish exiles back home. And it's at this time, that we would also learn, that it was Nehemiah, who led in the construction project, that dealt with the rebuilding of the city walls.

I also want to point out, that Nehemiah came into power, by the appointment of Xerxes' son Artaxerxes. Remember, that he was the same Persian king that had appointed Ezra some ten, or eleven years before.


The Council of the Sanhedrin?


However that may have been, know that it was at this time, that the "Council of the Sanhedrin" had now been established -- or perhaps I should use the word: reinstituted.) Nonetheless, know that this council, would serve as some sort of "judgment chamber", or "court of justice" for the Jewish people. Also keep in mind, that it was the Sanhedrin, that Jacob had spoken of, when it came to his prophecy to Judah -- when he had spoken about the lawgiver.

I also want to point out, that the council of the Sanhedrin, is totally different from the kingship. So therefore, it has nothing to do with the "royal scepter" that Jacob had spoke about in his prophecy. But when Jacob had mention a "lawgiver" -- know that this dealt with the next phase, when it came to what Jacob had spoken about in his prophecy. And it would be this lawgiver -- that would eventually take the place of the scepter: "The scepter shall not depart from Judah, nor a lawgiver from between his feet, Until Shiloh comes..."

Now notice that when Jacob says: "nor a lawgiver." Understand that it was this lawgiver, that is being represented by the Council of the Sanhedrin. I also want to point out, that this very important council, would stay relevant until the year 70 AD. For this was the year, that the city of Jerusalem, and the temple was destroyed for a second time, by the Roman General Titus (also known as Caesar).


Now let's take a quick look at something else, when it comes to the time that Jesus was born. For I want you to see, that Judea had eventually became a providence of Rome: "And it came to pass in those days that a decree went out from Caesar Augustus that all the world should be registered." -- Luke 2:1

Oh! How true this prophecy was: "The scepter shall not depart from Judah, nor a lawgiver from between his feet, until Shiloh [the Savior] comes..." -- Genesis 49:10

Know that Jesus had warned them...


"But He [Jesus] answered and said to them, 'I tell you that if these should keep silent, the stones would immediately cry out.' Now as He drew near, He saw the city [Jerusalem] and wept over it, saying, 'If you had known, even you, especially in this your day, the things that make for your peace! But now they are hidden from your eyes.

"'For days will come upon you when your enemies will build an embankment around you, surround you and close you in on every side, and level you, and your children within you, to the ground; and they will not leave in you one stone upon another, because you did not know the time of your visitation.'" -- Luke 19:40-44


Even the Jewish historian Josephus (for he was living in Jerusalem at the time) helps to confirm what Jesus had prophesied:

"The Romans, though it was a terrible struggle to collect the timber, raised their platforms in twenty-one days, having as described before stripped the whole area in a circle round the town to a distance of ten miles. The countryside like the City was a pitiful sight; for where once there had been a lovely vista of woods and parks there was nothing but desert and stumps of trees.

"No one -- not even a foreigner, who had seen the Old Judea and the glorious suburbs of the City, and now set eyes on her present desolation, could have helped sighing and groaning at so terrible a change; for every trace of beauty had been blotted out by war, and nobody who had known it in the past and came upon it suddenly would have recognized the place: when he was already there he would still have been looking for the City." - World Renowned Jewish Historian ~ Josephus

In the next article, we will close out the rest of Jacob's prophecy when it comes to Judah. And after doing so, we'll begin to move forward with Jacob's other prophecies, when it comes to his next group of sons.

119) The Prophecy of Zebulun, Issachar and Dan