"Then the officers of the children of Israel came and cried out to Pharaoh, saying, 'Why are you dealing thus with your servants? There is no straw given to your servants, and they say to us, "Make brick!" And indeed your servants are beaten, but the fault is in your own people.'" -- Exodus 5:15,16

In the last couple of articles, we learned that Pharaoh had decided to refuse the request of Moses and Aaron. And to make matters worse, Pharaoh was determined to make the Israelites pay for what Moses and Aaron had just petition on their behalf. Pharaoh's decision dealt with increasing the workload of the Israelites by denying them straw for bricks. What this meant is that the Israelites will now have to go out and gather their straw while still trying to make their brick quota for the day:

"So the same day Pharaoh commanded the taskmasters of the people and their officers, saying, 'You shall no longer give the people straw to make brick as before. Let them go and gather straw for themselves. And you shall lay on them the quota of bricks which they made before. You shall not reduce it. For they are idle; therefore they cry out, saying, "Let us go and sacrifice to our God." Let more work be laid on the men that they may labor in it, and let them not regard false words.'" -- Exodus 5:6-9 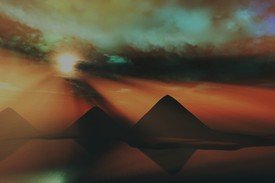 I'd explained that this decree issued by Pharaoh was indeed a direct move against God and His people. Also, when you thought Pharaoh couldn't take things further, he did so by mocking Moses and Aaron:

"For they are idle; therefore they cry out, saying, 'Let us go and sacrifice to our God.'"

After Pharaoh had done this, he took things even further: "Let more work be laid on the men that they may labor in it, and let them not regard false words." The stage was now set for God to show Pharaoh and the Israelites that He is the One True God.

So let's move forward, for we now see that the Egyptian taskmasters have begun carrying out Pharaoh's orders:

"And the taskmasters of the people and their officers went out and spoke to the people, saying, 'Thus says Pharaoh: "I will not give you straw. Go, get yourselves straw where you can find it; yet none of your work will be reduced."' So the people were scattered abroad throughout all the land of Egypt to gather stubble instead of straw. And the taskmasters forced them to hurry, saying, 'Fulfill your work, your daily quota, as when there was straw.' Also the officers of the children of Israel, whom Pharaoh's taskmasters had set over them, were beaten and were asked, 'Why have you not fulfilled your task in making brick both yesterday and today, as before?'" -- Exodus 5:10-14

This Will Not Do

Needless to say, the Israel supervisors weren't too happy about this, so they went to Pharaoh to try to seek some relief from the new decree that had been levied against them: "Then the officers of the children of Israel came and cried out to Pharaoh, saying, 'Why are you dealing thus with your servants? There is no straw given to your servants, and they say to us, "Make brick!" And indeed your servants are beaten, but the fault is in your own people.'" -- Exodus 5:15,16

Notice how the Israel supervisors are pleading with Pharaoh for relief; they submit their request with a bit of boldness. Observe how the Israel supervisors' points out that the decree is unjust and very unreasonable, being that they are now forced to go and search for the straw that is needed to make bricks with: "There is no straw given to your servants, and they say to us, 'Make brick!' And indeed your servants are beaten, but the fault is in your own people.'"

Now the Israel supervisors are having a hard time understanding the decree that had been levied against them and the rest of the Israelites, which made their tasks nearly impossible to fulfill. So they laid blame on the Egyptian taskmasters who were carrying out Pharaoh's orders. But in hindsight, they knew that Pharaoh was to blame for their problems, but they dare not say so, or their workload would become even more difficult. So they blamed the taskmasters in hopes that Pharaoh would ease the decree.

But Pharaoh would do no such thing, and he wanted to send a direct and clear message to the Israelites, so he responded by saying: "But he said, 'You are idle! Idle! Therefore you say, "Let us go and sacrifice to the Lord." Therefore go now and work; for no straw shall be given you, yet you shall deliver the quota of bricks.' And the officers of the children of Israel saw that they were in trouble after it was said, 'You shall not reduce any bricks from your daily quota.'" -- Exodus 5:17-19

If the message wasn't clear before, it has now been clarified even further: "And the officers of the children of Israel saw that they were in trouble." Basically, this statement indicates that the Israel supervisors knew that Pharaoh would not bend or relax his decree. This is indicated by the way he had said his last statement to them, for he said it in a way; fear had been placed within their hearts. So they pressed him no further, and they departed from Pharaoh's presence.

And while they were leaving from the Egyptian palace, they saw Moses and Aaron waiting for them outside: "Then, as they came out from Pharaoh, they met Moses and Aaron who stood there to meet them. And they said to them, 'Let the Lord look on you and judge, because you have made us abhorrent in the sight of Pharaoh and in the sight of his servants, to put a sword in their hand to kill us.'" -- Exodus 5:20,21

Another Test For Moses?

Now understand that this moment would prove to be a test for Moses, being that the last time Moses had tried to be of help to his people, he was ridiculed and mocked at that moment. Because of this and the crime he had committed the day before, Moses would flee from them, and he would spend the next forty years of his life in the wilderness.

But times have changed, and this is a new Moses, being that the last time he had faced a moment of such, he did not know the Lord. But now Moses has spent some time with God, and the Almighty has given him reassurance. Moses somewhat knows what to expect this time around, and he knew Pharaoh would resist. But he didn't count on Pharaoh doubling down on the Israelites burden.

This Should Have Been Expected?

You see, Moses knows what to expect, but the Israelites don't. They have no clue what's going to happen next when it comes to this situation. Sure Moses probably told them, but still, they don't know; they haven't spent time with the Lord as Moses had done. And now they're blaming their problems on Moses and Aaron for putting them in this horrible situation. They're now blaming Moses and Aaron for causing them to fall out of favor with Pharaoh.

But what the Israelites fail to understand was that they were already in a horrible situation, but being that this was all they knew, they looked at their situation as normal. They also failed to understand that they never had favor with Pharaoh; all the Egyptian ruler was doing when it came to them was using the Israelites to build his kingdom, and so, therefore, he tolerated them but never respected them.

But God had better things in store for the Israelites. He had promised Abraham that they would be a free people, a great nation. And make no mistake, God keeps His promises. This is something we should never forget, for we must learn to trust God at all times. No matter how tough things may seem, we must know that God is near and working on our behalf. But if we compromise our position with Him to seek comfort or avoid controversy, we will never be all that He created us to be.

We will only be what the world says we are, always being held by world standards, marginalize and categorized; you know - being made out to be common and nothing special. Never achieving that level of uniqueness or being able to tap into the things that make us the rare and priceless creatures that we truly are.

Honestly, can the world tell you about the things that make you who you truly are? One would think that a person would want to know about the hidden treasures that God has placed within them? This is why I challenge you to stick with God, come into His covenant that has been made possible by the Lord Jesus Christ. Press forth and get to know the One who knows you the best - Amen.

In the following article, we will see how Moses handles the moment he's now facing when it comes to the anger and resentment placed towards him by the Israelites. Will he run away like before? Will he turn towards God and seek answers? Will Moses begin to doubt himself again?

162) Moses and the Desolate Souls

164) Moses A God Amongst the Egyptians

165) The Battle for the Souls of Humanity