Oh my lord, it was borrowed!

Unfortunately, something bad would happen... for we find, that all of a sudden, while one student was chopping down his tree, the iron ax head he was wielding, had become loose; and so therefore, flew off the ax handle and into the River Jordan.

In the last article, we'd learned that after God had used Elisha, to heal Naaman of his physical leprosy affliction. Elisha's servant Gehazi, was watching this miraculous event from afar. Now personally, I don't think that Gehazi had anything against Naaman being healed. It would seem that his problem came about, after Elisha had refused, to accept the gifts Naaman had offered, after being healed. For you see, Naaman was so moved and appreciative, for what Elisha had done for him, the Syrian commander didn't hesitate, when it came to offering the prophet, something in return. This is why we soon find Naaman standing in front of Elisha saying: 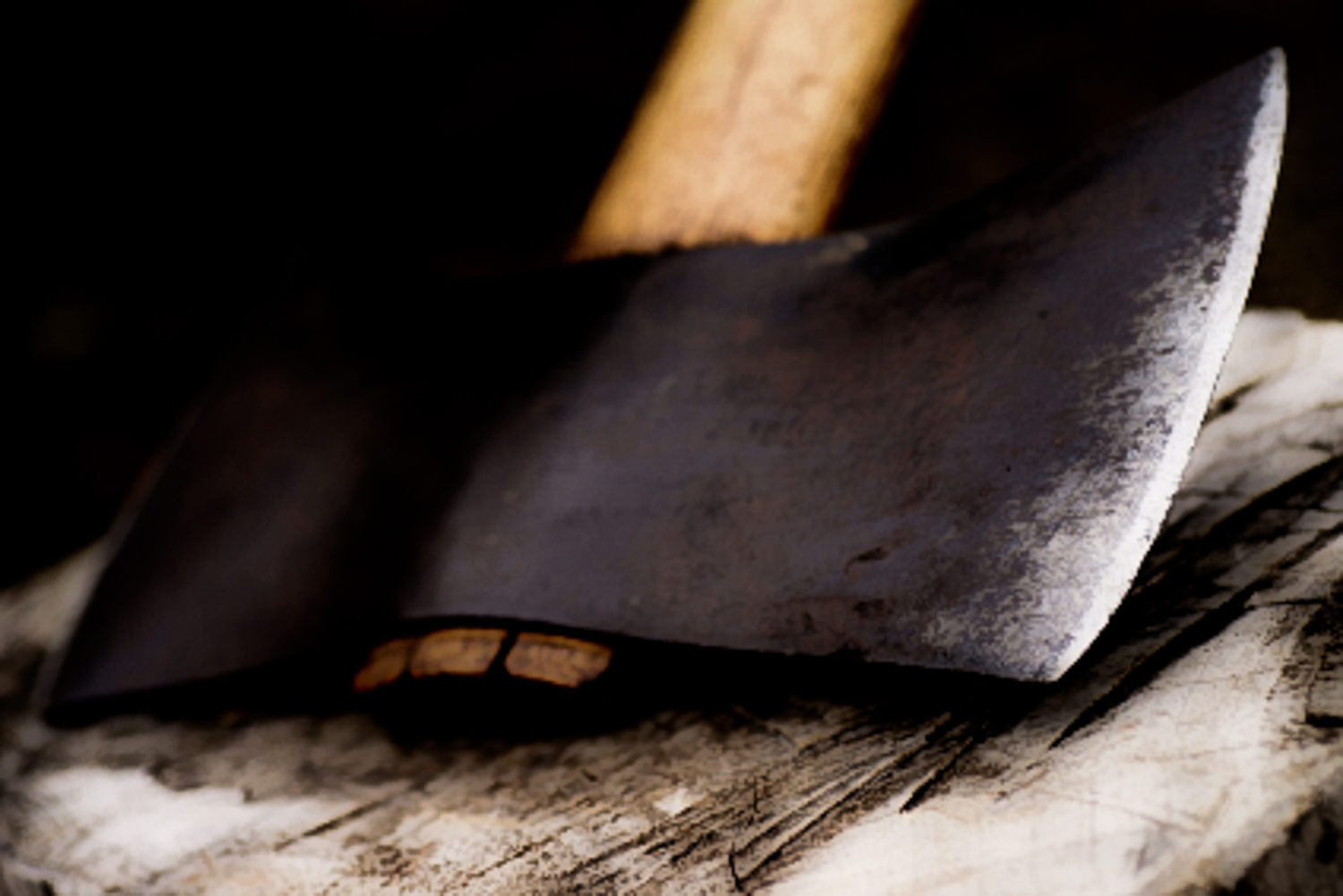 
"Now I know, there is no God in all the world, except in Israel. Please accept now a gift from your servant." But like I stated earlier, Elisha would refuse Naaman's generous proposal: "As surely as the Lord lives, whom I serve, I will not accept a thing."

Nonetheless, Gehazi didn't approve of Elisha refusing to accept Naaman's offer, for he was thinking that, the Syrian commander was getting off a little bit too easy: "My master was too easy on Naaman the Aramean, by not accepting from him, the gifts that he had brought. As surely as the Lord lives, I will run after him, and get something from him." -- 2 Kings 5:20

And run after him... Gehazi did. And not only that, he was able to get Naaman to give him some expensive gifts after all. Here we find Gehazi lying to Naaman: "Two young men from the prophet academy have just come to me from the hill country of Ephraim. Please give them a talent of sliver, and two sets of clothing." And needless-to-say, Naaman would oblige Elisha's servant.


But unfortunately for Gehazi, Elisha would find out about what he had done, behind his back. So this is why we find the prophet, asking his servant: "Where have you been, Gehazi?" And after hearing this, Gehazi responded by saying: "Your servant didn't go anywhere." But Elisha wasn't buying it. So he said to Gehazi: "Was not my spirit with you, when the man got down from his chariot to meet you? Is this the time to take money, or to accept clothes, olive groves, vineyards, flocks, herds, or menservants or maidservants? Because of your actions, Naaman's leprosy will now cling to you, and your descendants, forever."

So Gehazi's actions, ended up bringing down upon him and his household, a family curse. And even though Gehazi's account ends with an unfortunate judgement, being enacted upon him and his family, behind his greed and deception, we have to move forward. For we find that even though Gehazi has now been dropped from the scene, rest assured, the Lord is still using Elisha.

So we've now reached a point, from within the Sacred Record, were we find that the Gilgal Prophet Academy, was now enjoying a blessed season of increase, when it came to their enrollment of new students. Understand that their numbers, when it came to acquiring new student prophets, had grown to the point, to where they needed to expand. For you see, the size of their rooms, were becoming too strait for the students overall, when it came to living comfortably.

And actually, it shouldn't be a surprise to us, when it comes to their growth in enrollment numbers, being that by this time, the Lord had used Elisha to performed quite a number of miracles. So it shouldn't be hard to see, how Elisha was able to attract many new students. For who wouldn't want to learn, and studying, under the very man that had obtained so much favor with God?

For you see, one of the main benefits of enrolling in the academy, gave not only one, immediate and personal access, to a prophet like Elisha. For you see that in itself, was an honor and privilege. Understand, if students needed teaching, counseling, or intercessory prayer, Elisha was available for these young prophets to meet with, whenever they needed to.

Going To Jezebel For Help? Not A Chance!

Now because of the great teaching, that the prophet students were receiving from Elisha, we also find that they had adopted very humble spirits. And this humbleness went along well, with their newly developed, and industrious work ethics. For you see, this viewpoint is proven by the fact, that instead of the prophet students going out, and requesting special and expensive materials, when it came to their expansion, they were willing to go out as a team, and do all the hard work themselves.

Besides, it would had been very hard for them, to go to their current government for aid, being that at this point in time, Ahab's youngest son Jehoram, was sitting on throne. For he was now a man, who faithfully consults with his mother Jezebel. Now personally, at this time from within the Sacred Record, I would rank Jezebel, as being Elisha's main nemesis. And even though Jehoram was in power, his mother still had a major influence over him.

Nonetheless, even though the student prophets were poor, again, they were still industrious hard working men, who'd refused to be idle. So one day they approached Elisha and said: "Look... the place where we meet with you is too small for us. Let us go to the river Jordan, where each of us can get a pole; and let us build a place there, for us to live." -- 2 Kings 6:1,2

And needless-to-say, Elisha would agree with their suggestion. And because of this agreement, he gave them permission to go out and build for themselves, a new place. But the student prophets wanted not only Elisha's permission, but they also wanted to be instructed, and shown guidance from their master as well. So they asked him: "Won't you please come with your servants?" And after hearing their request, Elisha agreed to go with them. So they headed out towards the river Jordan.

They Were Honest Men

Now after Elisha and the student prophets, had arrived at the River Jordan, we find that the first thing they would do, is cut down trees. They did this, so that they could gather the necessary wood for their expansion. But unfortunately, something unfortunate would happen, for we find, all of a sudden, while one student was chopping down his tree, the iron ax head he was wielding, had become loose, and so therefore, flew off the ax handle, and into the River Jordan.

Understand, on top of the student prophets being hard working, industrious, and humble men of little means, they were also honest men as well. And this honesty is demonstrated by a student prophet, when we see him not being necessarily concerned, with losing the ax head per se... but we find that he was more concerned, with the fact that the cutting-tool wasn't his, but borrowed. And because of this, he was worried that he wouldn't have been able to return the ax head, back to the original owner.

So this is why we find him crying out to Elisha: "Oh my lord, it was borrowed!" Now after Elisha had heard this, he asked his student: "Where did the ax head fall?" So the young prophet took Elisha, and showed him where in the River Jordan, the iron ax head had fallen at. Next, Elisha cut off a branch and threw it in the place, where the iron ax head had fallen at in the River Jordan.

And soon after this had happened, immediately, the iron ax head began to float on the top of the water, just like the stick that Elisha had just thrown in. So after seeing this, Elisha told the student: "Lift it out!" So the young prophet reached out, and took hold of the iron ax head, while it was floating on top of the river.

Once again, we find the Lord using Elisha in the most wonderful of ways. And even though a floating iron ax head, doesn't seem to be, too impressive, when compared to the other miracles that the Lord had done through Elisha. The mere fact, the Lord would move in this type of situation, proves just how faithfully willing He His, when it comes to those who have chosen to follow in His ways. Nonetheless, we move forward... What's this! It looks like one of Israel's old nemesis' decides to come back into the picture. Could there be another war in store for Israel? And if so, will God be willing to help Ahab's household out of a jam, once again?