"O Lord, open my servant's eyes, so that he may see." Then all of a sudden, the Lord had opened Elisha's servant's eyes; and behold, the servant saw a great army of horses, and chariots of fire. For they had covered the hills, and filled the entire landscape, that had surrounded the servant and his master, Elisha.

In the last article, we'd learned that one of Elisha's prophet academies, ended up enjoying a season of increase, when it came to new student enrollments. As a matter of fact, enrollment at this time was so good, the current building that the academy was using, was no longer able to accommodate the student prophets, who were looking to gather there. So they took this issue to Elisha, their master, the head prophet. For you see, they wanted to get Elisha to agree to building a new, and much larger meeting place. Needless-to-say, Elisha would agree to doing this project. So they headed out to the River Jordan, so that they could gather the much needed wood that would be required, for them to build their new meeting place with. 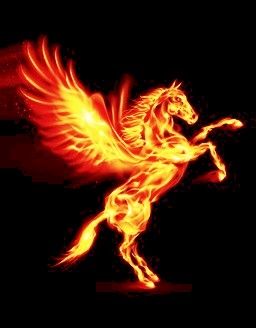 
However, while they were out chopping down trees, one of the student prophets ran into a snag.

This snag came about, when the student was wielding away at a tree, and then all of a sudden, the ax that he was using, became disable.

And not only that, the ax head accidentally flew off the handle, and into the River Jordan.

Now this incident might not seem like a big deal, but being that the ax had been borrowed, for the task at hand.

Understand that the student prophet was concerned, that he wouldn't be able to return the chopping tool, back to the person he had borrowed it from.

So the student immediately sought out Elisha, when it came to his concern: "Oh my lord, the ax, it was borrowed!" So Elisha being the man that he was, didn't hesitant to help the young student. He told the student: "Show me where it went in at." And after the young prophet showed his master, where the ax head had fallen. Elisha was able to retrieve it from the river, by miraculously, causing the iron ax head, to float on top of the river's surface, as if it were a tree branch. To put it simply, Elisha was able to make iron metal, float on top of the water, as if it was wood.

Nonetheless, we begin to move forward. And it's at this point, from within the Sacred Record, where we find, that after some time had went by, the Arameanians (Syria) were back at war with Israel. Now keep in mind, Ben-Hadad was still the king of the Arameanians. And Jehoram was still, the king of Israel. Now when it came to Jehoram, I want to remind you, he was the youngest, and the last in line, when it came to Ahab's sons. Know that this little bit of info, will become more important, as we move forward in our journey.

Be that as it may, we also find at this time, the Syrian king Ben-Hadad, had been planning some secret military strategies, he wanted to use against Israel this time around. And because of this, the Lord wanted to alert the Israel king, about Ben-Hadad's planned out attack plans. So He'd sent word to Jehoram through His most trusted prophet Elisha.

Now I also want to point out, despite the problematic history between the Lord's prophets (mainly Elijah) and Ahab's household, at this particular time, the Lord still wanted one of his prophets (which was Elisha) to help Israel with their current, unfortunate situation with Syria. And even though, the reason why the Lord wanted to help Israel at this time, hadn't been made totally clear; we must remember, God still had a three phase judgment plan in place.

Now keep in mind, this judgement plan, had been in play, since the days of Elijah. This was back when Elijah was ready to give up, but the Lord didn't want that to happen, so He made some promises to Elijah, so that he would stay encouraged, and stay the course that the Lord had him on, at the time. Remember, Elijah was having second thoughts, when it came to his calling, while he was hiding from king Ahab and Jezebel at Mt. Horeb. Remember this was a place that was also known as "The Mountain of God."

So this is the three phase judgement plan, I've been constantly referring back to. Now the phase that concerned Elijah & Elisha, from within this passage, had already came to pass. But there are still two more phases that are still in play. For these are two phases that are still linked to two major family dynasties (Israel & Syria) that still had to be dealt with. And this is what we're seeing being played out right now, when it comes to Israel once again, finding itself at war with Syria, is all about. However, more on this later.

Now after hearing what the Syrian king had to say, his officers responded by saying: "None of us, my lord the king; but Elisha the prophet, the one that's in Israel, tells the king the very words you speak in your bedroom." And when Ben-Hadad had heard this, he demanded from his officers: "Go, find out, where this prophet is at."

So a short while later, a report had made it back to Ben-Hadad, informing him that Elisha was in Dothan. Now Dothan was a town district that was located in Palestine, which wasn't very far from Syria. Nonetheless, the report, also reported on Elisha's reputation. For it spoke of him being a very powerful man, who'd operated through the God of Israel. However, in spite of this, Ben-Hadad still sends a massive army down to Dothan, in order to seize the prophet.

I'm Tired if This! Bring Me Elisha!

Nevertheless, when Ben-Hadad's army arrived at Dothan during the night, they surrounded the entire town district. Then morning came, and after seeing this, Elisha's servant said to his master: "Oh my lord, what shall we do?" And after hearing this, Elisha responded by saying: "Don't be afraid, those who are with us, are more than those, who are with them." Now after Elisha had said this, he continued with his prayer:

"O Lord, open my servant's eyes, so that he may see." Then all of a sudden, the Lord had opened Elisha's servant's eyes, and behold, the servant saw a great army of horses, and chariots of fire. For they had covered the hills, and filled the entire landscape that had surrounded the servant, and his master, Elisha.

NOTE: Now remember, Elisha's previous servant Gehazi had already been dismissed. So this is a new attendant, that the Sacred Record is referring to. For he was someone who hadn't been with Elisha long, and perhaps, this was why he was so easily worried and shaken, when he saw the great danger that was now facing him, and his master.

Ben-Hadad's Men Blinded by the Lord

Nonetheless, we now find Ben-Hadad's army marching forward, starting to engage the town, as they look to capture Elisha. Now after seeing this, Elisha once again prayed to his Lord: "O Lord, strike these people with blindness." And after hearing this, God did what the prophet had asked of Him, and the Arameanian army became completely sightless. So the prophet approached the army, shouting out to them: "This is not the road, and this is not the city; come with me, and I will lead you to the man you are looking for."

So Ben-Hadad's men were bewildered, confounded, and the army knew not the voice that they heard. And they also didn't know, that the voice was coming from Elisha. And with them now being helpless, they'd followed the prophet all the way to Samaria. Now after the Syrian army had entered the city of Samaria, once again, Elisha prayed: "Lord, open the eyes of these men, so that they can see." Then all of a sudden, the Syrian army eyesight was restored to them, and it was at this time, the army realized that they were in the city of Samaria.

So after this had happened, the Israel king shouted out to Elisha: "Shall I kill them my father? Shall I kill them?" Now After hearing this, Elisha responded to the king: "Would you kill men, you have captured with your own sword, or bow?" Next, Elisha told the Israel king to set some food, and water out, before the captured men of Syria. And not only that, the prophet also instructed Jehoram, to set the men free, so that they can return back to their lands.

So Jehoram did as he was told, and he had a great feast prepared for them. And Ben-Hadad's men, ate and drank, and when they were finished, Jehoram released them. So the Syrian army went back to Ben-Hadad, and they told him all that had happen. And after the Arameanian king had heard all of these things, he stopped attacking the Israel kingdom for that time.

So here we find, once again, the Lord steps in to save Israel, by sending them His prophet Elisha. And because of this, the Lord would use the prophet, to discourage Ben-Hadad and his men, from continuing to attack Israel. So the Syrian king leaves Israel to be, at least for the time being. So does this mean that there will finally be peace, between Israel and Syria? Or will we once again, find Ben-Hadad's pride, getting the best of him.