Keep in mind, that at this stage the earth was still without form and void, and darkness was upon the face of the deep. This is when God sends the universe a great blessing by speaking light into existence.

In the last article, we began our journey from within, what I like to call: The Creation Stage. From within that article, I'd pointed out that this stage consisted of the first 11 chapters of the Bible. I'd shared with you my viewpoint on how I hold the notion that these first 11 chapters will serve as the overall foundation - when it comes to the remaining 1178 chapters that follow. 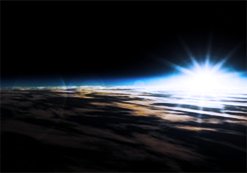 Nevertheless, let's continue to move forward from within our journey.

Now keep in mind, we're still traveling from within the Creation Stage. From within this stage, we found the earth to be without form.

The earth was also void of all substance, as darkness was upon the face of the deep.

This is when God sends the universe a great blessing, by speaking light into existence: "Then God said, 'Let there be light'; and there was light. And God saw the light, that it was good; and God divided the light from the darkness." -- Genesis 1:3,4

When it comes to this light, know that it's nothing but beauty and power that eventually emerges from within all of its brightness. This is why we shouldn't be surprised - when the Sacred Record reveals that after God had seen the light that He'd created, He saw that it was good.

It was at this point; God had divided time between the two. And by doing so, this had caused the light to come away from the darkness. And it was at this moment, God called light "day" and the darkness He called "night." And this completed the first stage from within God's creation account.

Now while we're here, let's take a quick look at the word "firmament." Know that this "firmament" that the passage mentions is simply an expansion of space, or what is known as the "visible heaven" or the "third heaven." Also know, this particular heaven is one of three mentioned from within the Sacred Scriptures.

Nevertheless, let's take a brief look at the other two heavens mentioned from within the Sacred Scriptures. The next heaven that is alluded to is known as the "second heaven." This heaven plays host to the: planets, moon, stars, galaxies, milky-ways, you know, the entire universe.

The next heaven found within the Sacred Record is known as the "first heaven." This heaven is where the Eternal Kingdom (House of God) is located. This would be the place where the angels worship God - to which their praise for the Lord never ceases.

While we're here, I'll also like to point out - when the passage that I'd mentioned earlier speaks about the dividing of the waters. This involves separating the land waters from the atmospheric vapors, also known as water, or moister, found within the climate (atmosphere) and the clouds.

Waters Gathered as Grass Comes Forth

Now we're entering into the third creative stage: "And God said, 'Let the water under the heaven be gathered together under one place, and let the dry land appear,' and it was so. And God called the dry land Earth; and the gathering together of the waters called he Seas: and God saw that it was good. And God said, 'Let the earth bring forth grass, and herb yielding seed, and the fruit tree yielding fruit after his kind, who seed is within itself, upon the earth: and it was so.'" -- Genesis 1:9-10

Now it's revealed at this point; God caused the land waters to be gathered and formed. And from within this creation process: the seas, oceans, rivers, waterfalls, and lakes to be made. Within this same stage, we also had the creation of plant life. Because of this, there could be found lovely rich green vegetation, along with flowers and trees that could be seen, filling the earth's surface.

Lights To Map The Sky With

At this point, the Sacred Record reveals how God filled the heaven of outer space with the planets, sun, moon, and stars. Keep in mind, in the previous article, our journey from within the first stage revealed the creation of physical light. And now we find that during this process, there would be different types of light sources. Understand that these various light sources are directly being placed by God's creative hand.

God's Creative Lights: How they functioned

Keep in mind; these two primary light sources would function from within three to four possible ways:

The first function deals with the two light sources operating as signs for God's physical, creative works. Because of this divine service that the two light sources provided, we're able to see God's marvelous creation while being able to be beneficiaries as we interact every day with what God created.

These two great light sources should serve as a constant reminder that all things were created by the Hand of God. Nevertheless, when it comes to the second function that these two great light sources serve as. Know that they operate as seasons, which were put in place, to help humanity divide the days, months, and years from each other. For they would serve as what you could call a "calendar of nature" that the human race could follow.

Be that as it may. The third function allows these two great light sources to operate as great lights - they would be used as guides and maps for the outer-space regions.

The following article will explore the fifth and sixth stages from within God's creation account. Now I want you to know; when we get to the sixth stage, we'll begin to learn about the highlight of God's creation, us, the human being. May God's blessings be upon you, and thank you for your support.

03) God's Highlight - The Human Being