God Banishes Them from the Garden of Eden

"And Adam knew his wife again; and she bare a son, and called his name Seth: For God, said she, hath appointed me another seed instead of Abel, whom Cain slew. And to Seth, to him also there was born a son; and he called his name Enos: then began men to call upon the name of the Lord."


In the last article, we'd learned that after Lucifer (Satan) had been cast from heaven, we find that Lucifer sets out to seek revenge against God. He does this by attacking the highlight from within God's entire creation, the human being. And although at this moment in time, there was only Adam and Eve, understand that the couple still represented the human race as a whole.

Be that as it may, we find the Scriptures revealing that it would be at this point, Lucifer begins to set a trap for Adam and Eve. We find Lucifer setting a trap that consists mainly of three lures, or temptations: "the lust of the flesh," "the lust of the eyes," and the "the pride of life."

Keep in mind, when Adam and Eve fell, they were representing the human race. When they fell, all of humanity had fallen right along with them. But despite all of this, the Sacred Record reveals that although Adam and Eve had allowed themselves to be deceived by Lucifer (Satan) -- God didn't exercise His right when it came to destroying them for their disobedience. 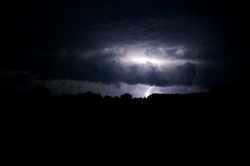 And even though God had passed judgment on all the parties that were involved: Adam and Eve, the serpent, Lucifer (Satan), and nature (yes, nature too). When it was all said and done; by God not destroying them, we get the first glimpse from within the Sacred Record - God's gift of mercy, grace, and forgiveness.

Nevertheless, as we move forward, it's at this time, the Sacred Record reveals that Adam names his wife. He gives her the name "Eve." Her name signifies life. I'd also like to point out; it would be at this point, Eve would be given the title: The Mother of all Living. It's during this time; God shows Adam and Eve more mercy. He does this by providing for them some coats of skin. God did this in order to hide their nakedness:

"Also for Adam and his wife the Lord God made tunics of skin, and clothed them." - Genesis 3:21

Although Banished - Things Are Still Doable

Now, after God had given Adam and Eve a blessing of provision, which was done by providing the coats of skin - we find God making an announcement:

"And the Lord God said, 'Behold, the man is become as one of us, to know good and evil: and now, lest he put forth his hand, and take also of the tree of life and eat, and live forever.' Therefore the Lord God sent him forth from the garden of Eden, to till the ground from whence he was taken. So he drove out the man; and he placed at the east of the garden of Eden Cherubims, and a flaming sword which turned every way, to keep the way of the tree of life." -- Genesis 3:22-24

Again, the passage above reveals that Adam and Eve were banished from the Garden of Eden. I want to point out that although the couple was banished, I believe that the land that they ended up inhabiting wasn't all that bad. But of course, nothing can compare to the Garden of Eden. However, know that I'm making this statement because Adam and Eve (with a lot of hard work) were still able to get some production and value from the land they were now dwelling on.

Notice how later on in the Sacred Record, we find that after Cain had killed Abel, he too was banished from the land, where his family (the household of Adam & Eve) had currently settled, after being banished from the Garden of Eden. Understand, God had to banish Cain from that land since it was (although no Garden of Eden) still productive. God had to remove Cain from that place so that He could move him to a land that was considered unproductive.

This was done to punish Cain for his crime without destroying him completely: "And He said, 'What have you done? The voice of your brother’s blood cries out to Me from the ground. So now you  are cursed from the earth, which has opened its mouth to receive your brother’s blood from your hand. When you till the ground, it shall no longer yield its strength to you. A fugitive and a vagabond you shall be on the earth.'" -- Genesis 4:10-12

In Spite of their Fate

Now I also like to point out; the Sacred Record seems to reveal that Adam and Eve had continued to obey God, despite their new unfavorable situation: "And Adam knew his wife again; and she bare a son, and called his name Seth: For God, said she, hath appointed me another seed instead of Abel, whom Cain slew. And to Seth, to him also there was born a son; and he called his name Enos: then began men to call upon the name of the Lord." -- Genesis 4:25-26

Despite their disobedience, we find God continuing to use Adam and Eve when it came to His overall plan. A plan that dealt with God eventually restoring humanity to its rightful place. This plan is somewhat demonstrated by Adam and Eve having another child after Cain and Abel. And the name of this child was called Seth. This name meant "founder." Now notice how from within the passage above it states that after Seth was born, he too had a child named Enos. Then it would be at this time; men began to call on the name of the Lord.

In the following article, we'll enter into the account dealing with Adam and Eve's sons, Cain and Abel. We will also take a closer look at their talents and gifts and why God had favored the obedience of Abel over the disobedience of his brother Cain.