The Fall of Humanity

And actually, the Sacred Record seems to suggest, that she was comfortable enough to be around the serpent, that she ending up having a conversational debate with the creature. And as we would soon learn - this would end up being a catastrophic mistake on her part.

In the last article, we took a look at what some would call a second creation account. But I put forth the notion that the account in question was basically a more detailed record when it came to the creation of man. I'd also pointed out that this account served as an introductory to the Sacred Record of Adam & Eve. We learned that God didn't create the human being like He'd done when it came to the rest of His creation.

We discovered that the Lord had created us from within Himself. Not only did the Lord speak to Himself, as He breathed life into us when He'd first created us. But we also learned that He'd crafted and molded us after His image and likeness. Understand that this would be a unique privilege that only the human being would be privy to. For no other creature can make such a claim. 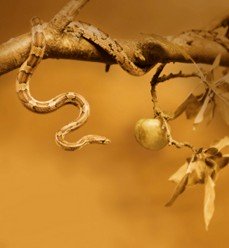 As we journey forth, the Holy Scriptures reveal the recorded account involving Lucifer, the fallen angel (also known as Satan, Morning Star, or Helel.)

Keep in mind that this record comes after the divine heavenly war that had just taken place between God and Lucifer.

It would be during this angelic conflict that Lucifer would be cast out of heaven.

Now I hold the notion that we now find Satan seeking revenge against God because of this divine war.

And with Satan knowing that he can no longer reach God, it looks like Satan decides to go after humankind, God's most precious treasure. Now keep in mind, Lucifer wouldn't come at humanity in his true form.

So he decides instead to come at humanity in the form of a serpent. It's also at this time; we find the Scriptures pointing out that the serpent was indeed the craftiest out of all the animals that God had made:

"Now the serpent was more cunning than any beast of the field which the Lord God had made..." -- Genesis 3:1

Now it's presumed that the serpent at this point and time was perhaps, a magnificent and majestic-like creature that probably had wings and walked on all fours. It's also presumed that Eve had a weakness for beautiful things (like we all seem to do.)

The reason I would make such a statement is that we find that Eve wasn't frightened of the serpent. And actually, the Sacred Record seems to suggest she was comfortable enough to be around the serpent, so much so, she ends up having a conversation with the creature. And as we would soon learn, having such a conversation would end up being a catastrophic mistake on her part.

At this time, Lucifer (Satan) gets Eve to fall into the trap of trying to match wits with him. And like I just stated earlier, this would prove to be a colossal mistake on Eve's part. I hold the notion that it's not in our best interest to try to debate God's Word with unbelievers and with those that have their hearts and minds set on destroying the Word of God. We're supposed to learn how to recognize and resist these types of conversational traps and snares.

Remember, plenty of other people would love to hear about God's Word and the unconditional love that our Creator has for us. So there's no need to try to debate and convince people about the Truth. Besides, if you could convince them of one viewpoint, rest assured, you'll have to debate them on another. I don't know about you? I don't have the desire, motivation to do this, or the time to waste chasing after folks. Know that Jesus didn't chase after anybody, and rest assured, you won't find me doing it either.

Nonetheless, Eve and Adam ended up falling for the trap that Lucifer (Satan) had set. And this happened mainly because of his approach. He didn't aggressively come at Eve, but he came at her in a very subtle and sensible way. He does this by getting Eve to fall for three major temptations:

First Temptation: Dealing with the "lust of the flesh." Understand that this temptation was put in play when Eve saw that the tree was good for food.

Second Temptation: Dealing with the "lust of the eyes." Know that this temptation was put in play when she saw that the tree was pleasing to the eyes.

Third Temptation: Dealing with the "pride of life." Now keep in mind that this temptation was put in play when Eve saw that the tree would increase one's wisdom.

Now I would like to take this time to point out a small but very important detail regarding this record. It would seem, people fail to realize that Adam was standing right there next to Eve while she was debating Satan. If we were to pay close attention to what the passage says, it informs us, Eve had turned towards Adam, to offer him the fruit:

"When the woman saw that the fruit of the tree was good for food and pleasing to the eye, and also desirable for gaining wisdom, she took some and ate it. She also gave some to her husband, who was with her, and he ate it." -- Genesis 3:6

Now personally I believe that this little detail is very important to know. Why? Because often times, we we're led to believe that Eve was doing this all on her own. But we find that the Sacred Record tells a different story, being that we'd just read in the passage above, this is simply not true, when it comes to Eve being there by herself, when she was found to be debating Lucifer.

For the Sacred Record just revealed that they were both standing there together. Also notice from within the passage that Eve didn't have go look for Adam, all she had to do, was turn and give him the fruit: "She [Eve] also gave some to her husband [Adam], who was with her, and he ate it."

Now Adam takes the fruit and begins to eat. And it's at this point, he becomes the first recorded sinner from within the Sacred Record. Notice how Adam was hit with this label, even though Eve had taken the first bite. Now it's at this point, their eyes were open, and they knew, they were naked. And because of this, Adam and Eve tried to hide themselves from the Lord. And because of their foolish actions on that day, humanity had fallen away, from the very God that had gave them everything.

The Judgments Against Humanity

Now the judgment that God placed on humanity was at least twofold. One of the judgments dealt specifically with Eve (or women). For we find that God tells Eve that her punishment will deal with women suffering while giving birth to their children. And the Lord also tells Eve that men would dominate over women:

"To the woman He said, 'I will greatly increase your pains in childbearing; with pain you will give birth to children. Your desire will be for your husband and he will rule over you.'" -- Genesis 3:16

Now the second judgment dealt with Adam (or men) specifically. We find God telling Adam (men) that we were to toil the ground and eat of it all the days of our lives until we are to return to the dust, from which we were formed:

"Then to Adam He [the Lord] said, 'Because you have heeded the voice of your wife, and have eaten from the tree of which I commanded you, saying, "You shall not eat of it": 'Cursed is the ground for your sake; in toil you shall eat of it all the days of your life.'" -- Genesis 3:17

Judgments Against: Nature and the Serpent

Now one of the judgments that were specifically placed against nature - dealt with it no longer being considered a paradise (as it was intended to be) but instead, it will now be seen as a wilderness:

"Then to Adam He said, 'Because you have heeded the voice of your wife, and have eaten from the tree of which I commanded you, saying, "You shall not eat of it": 'Cursed is the ground for your sake; in toil you shall eat of it all the days of your life. Both thorns and thistles it shall bring forth for you, and you shall eat the herb of the field." -- Genesis 3:17,18

And then there was a judgment that was placed against the serpent and its kind. God enacted this judgment upon the serpent simply because the serpent had allowed Lucifer (Satan) to possess its body. And it would be from this point forward; God would cause this creature to be made to crawl on its belly, in the dust, for the rest of its natural existence:

Now I would also like to point out that there was a possible fifth judgment (even though some would argue against the notion.) Now, this judgment had gone against Lucifer (Satan) himself. Keep in mind, before I go further, this viewpoint is highly debatable. But when one takes a closer look at what the Sacred Record has to say about the event, one might find that the recorded account would seem to suggest this was a judgment and that it would be attached to Satan through the serpent.

"And I will put enmity between thee and the woman, and between thy seed and her seed; it shall bruise thy head, and thou shalt bruise his heel." -- Genesis 3:15

Now notice, when we compare this same Scripture to this one: "And the God of peace shall bruise Satan under your feet shortly. The grace of our Lord Jesus Christ be with you. Amen" -- Romans 16:20

Now I hope that you can see the similarities between these two passages? So this way, you can understand why most Bible scholars believe that there was a fifth judgment that was placed on Lucifer (Satan) as well.

In the following article, we'll look at the reaping that Adam and Eve had to endure when it came to the mistake they had made. And it's also at this time; we find God's mercy and grace bestowed upon the two.

The Sons of God & The Daughters of Men