Know that our journey has already taken us through the first chapter of Genesis. Keep in mind that we were able to do a quick overview of God's six-day creation process from within that chapter. Also, in the previous article, we were able to take a closer look at the garden known as the Garden of Eden.

I'd pointed out how this was a unique and magnificent place the Lord had created, specifically for humanity. I'd pointed out that from within this garden, God had given us everything. All we had to do, as humans, were to be obedient, while we acknowledge one restriction and adhere to it:

"And the Lord God commanded the man [Adam], saying, 'Of every tree of the garden you may freely eat; but of the tree of the knowledge of good and evil you shall not eat, for in the day that you eat of it you shall surely die." -- Genesis 2:16,17 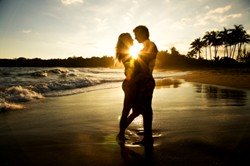 Now we won't delve into this commandment at this time; we will come back to it. However, in the meantime, let's move forward a little. This is where we find the Scriptures revealing what would seem to be a different record, or as some would like to call it, a second creation account. I believe that some have made the crucial mistake of teaching this passage as such. But understand, when it comes to this particular passage, I hold the notion, this is not the case.

When it comes to this passage, what we have, deals with the fact that this particular passage provides a more detailed and completed account of what God did during the sixth stage of the creation process. Now when it comes to this so-called second creation record, as I stated earlier, it simply introduces us to a more detailed record regarding the creation of Adam and Eve. Now I like to believe God had put in a lot of work and detail when it came to the molding and crafting of the human being.

And this is why, I also believe, God had taken upon Himself to provide us with a record that gives us way more specifics and a better explanation -  when it came to the creation of the human being. It's at this moment in time when God created us; it was a very big deal. And it's good; we are presented with a quick summary of how we were created. This is why this particular article will focus a little bit more on the recorded creation account of Adam (whose name means: man) and Eve (whose name means: life.)

Now let's begin by taking a look back, when it came to the time period, where humanity was at it's purest form: "The Lord God formed man of the dust of the ground, and breathed into his nostrils the breath of life, and man became a living soul." -- Genesis 2:7

So it's from within this Scripture, we'll take a quick look at the phrase: Now when the passage says, "The Lord God formed man." Understand that this phrase emphasizes how man was not only formed by the Hand of God, but he was also crafted. Also, at this point, from within the Sacred Record, everything that God had created was just that, a creation.

But when God came to make man, He didn't just create man, He formed and crafted him. Also understand, it's at this part of the Scripture where it's revealed to us that there was a special process that had taken place when God got around to creating the human being.

The Breathe of God

Now, if you were to look at the phrase: "...breathed into his nostrils the breath of life, and man became a living soul." We find this part of Scripture revealing that although we were being formed from the dust of the earth, life would be activated from the breath of God. I hold the notion, this little piece of information is essential, for you must understand, the breath of God imparted a part of Him into us.

And it was at that moment, God was a part of us, and because of this, we'd gained various life attributes that can be attached to many different things that were woven from throughout God's overall creation. To put it simply, we gained life attributes of being able: to grow, nourish, have senses and emotions, along with a rational thought process; with being able to reason, and the gift of understanding, with being able to develop the type of logic, no other creature can match. The breath of God gave us natural life that's able to reach to the highest degree.

Nevertheless, we move forward. So let's take a quick look at what had happened after God had formed Adam. It would be at this point; the Lord had placed a garden eastward, from within a place called Eden. The Sacred Record reveals that God then placed Adam within this particular garden, and it was Adam's job to be a good steward when it came to the keeping of it.

Also know, part of Adam's job was to give names to every animal that God had brought to him. These animals included: cattle, the fowls of the air, and the beast of the fields:

"And the Lord God said, 'It is not good that man should be alone; I will make him a helper comparable to him.'" -- Genesis 2:18

Know that we are social creatures and so, therefore, it wasn't good for man to be alone. Of course, some would ask: "But what about God's awesome creation that surrounded us? Shouldn't that have been enough?" And if one were, to be honest, that person would have to admit, this is a valid question, especially when you look at the surface of the Sacred Text.

And because of this, God decides to give man a mate. Someone that will be able to relate and interact with him. For man needed someone, he could identify with, be affectionate towards and have a family with.

Man needed someone of his kind, as there was nothing else like him in all of God's creation. Remember, God is awesome, and we should be reminded of this fact every time we place our eyes upon His marvelous creation. Thank you, God, for all you have given us, for you are worthy to be praised!

Now we've taken a look at the process that God had taken when it came to creating the human being. We will now look at the events that caused humanity to fall away from God. We will also explore the trap that was placed and the temptations that led humanity into that very same trap.