The Garden of Eden

We have now reached a point within our journey -- where we're now being introduced to a special and unique place that was known as the "Garden of Eden" and indeed this place was awesome, majestic and beautiful. And to top it off, it was designed to be fully enjoyed by mankind.

In the last article we wrapped up God's creation account with what I like to call the highlight of God's creation. We also learned that God saw that all He had created was good, and how He was able to rest on the seventh day. Be that as it may, we now move forward from within our journey. And it's at this point, we find that the Sacred Record begins to reveal to us, something that was truly magnificent.

For our journey has brought us to a point, where we've discover that God had created a dwelling place specifically for mankind:

"And out of the ground made the Lord God to grow every tree that is pleasant to the sight, and good for food. The tree of life was also in the midst of the garden, and the tree of knowledge of good and evil. And a river went out of Eden to water the garden; and from thence it was parted, and became into four heads." -- Genesis 2:9-10

Know that this passage is referring to a very special and unique place that was known as the Garden of Eden. God wanted us to know, this place, was indeed: awesome, majestic and beautiful. And remember, like I'd stated earlier, it was designed to be fully enjoyed by mankind. 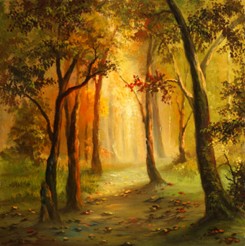 Now let's take a closer look at this passage: "And a river went out from Eden to water the garden; and from thence it was parted, and became into four heads. The name of the first is Pison: that is it which compasseth the whole land of Havilah, where there is gold; And the gold of that land is good: there is aromatic resin and the onyx stone." -- Genesis 2:10-12

Understand that the Garden of Eden was made up to be watered by four different rivers that had parted away from one main river. It's presumed that the two main rivers that are involved, would be the Euphrates and the Tigris.

Now keep in mind, the Holy Scripture mentions a place that's called Havilah. Some seem to think, this was a place that was probably located from within certain parts of Arabia. Being that it was known to be a place that was rich in stones like: gold, pearls, gems and onyx.

Now don't get this river that is being called Gihon, mixed up with the one that you'll find in the land of Israel. For this is a different one that is believed to be of a greater magnitude. Also know, the land mentioned that's being called Ethipoia, we must be careful not to get this place confused, with the one that is found in today's modern day Africa. For it's believed, this land was probably located from within the lands of Arabia as well.

However, when it comes to the Garden of Eden, know that it had two very important additions that had came in the form of two trees, that existed from within its overall makeup. Note that one tree was called The Tree of Life. And some would say, this tree main benefit, would have allowed the human race to be able to achieve some type of immortality.

However, the second tree was called The Tree of the Knowledge of Good and Evil. Know that this tree, is believed to be good for food, as well as being pleasing to the eye. This tree also provided one the ability to gain wisdom. And it was this type of wisdom that God had warned Adam against:

"And the Lord God commanded the man [Adam], saying, 'Of every tree of the garden you may freely eat; but of the tree of the
knowledge of good and evil you shall not eat, for in the day
that you eat of it you shall surely die." -- Genesis 2:16,17

Now keep in mind, Adam was able to enjoy all that the Garden of Eden had to offer, all except for one tree, and like I stated earlier, this tree was called The Tree of the Knowledge of Good and Evil. For the Sacred Record reveals, that Adam was given the command that he must not eat from this tree, for if he does, he would surely die.

Now before we get into the actual biblical record, in regards to Adam and Eve. I would like to take a closer look at what some Bible critics would call a second creation account. But know that I see this as a false, and misleading tactic that the opposition uses, when they try to discredit the Word of God.

03) God's Highlight - The Human Being