"Now Cain talked with Abel his brother; and it came to pass, when they were in the field, that Cain rose up against Abel his brother and killed him. Then the Lord said to Cain, 'Where is Abel your brother?' He said, 'I do not know. Am I my brother's keeper?'"


In the last couple of articles, we've been going over the recorded account in regard to Adam and Eve's sons, Cain and Abel. We'd also took a brief look when it came to Cain and Abel's gifts and talents: "Now Abel was a keeper of sheep, but Cain was a tiller of the ground." We'd also looked at the possibility of them perhaps being twins. (Remember, I don't hold this viewpoint.) We'd also took a look at the reasons why God ended up favoring Abel's offering over Cain's.

And on top of that, we'd also explored if Cain might have had any other options when it came to what he could offer unto the Lord. This became an interesting question because Cain didn't own any flocks of his own - therefore putting him in a situation that wouldn't allow him to offer a first-born lamb. And it was at this time, I pointed out, how Cain could have easily purchased the first-born lamb from the flocks of his brother Abel. But as we will soon learn, Cain had other ideas when it came to his brother Abel. 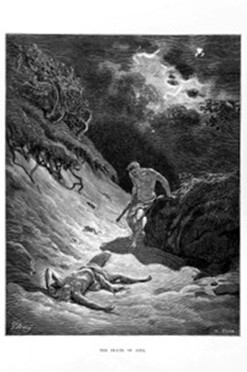 Be that as it may, we begin to move forward. And it's at this point, the Sacred Record reveals that instead of Cain humbling himself. Especially by trying to be obedient to God's command when it came to what type of offering that would be accepted. Cain instead succumbs to the angry, jealous emotions that were rapidly developing from within his heart and mind:

"But on Cain and his offering He [God] did not look with favor. So Cain was very angry, and his face was downcast. Then the Lord said to Cain, 'Why are you angry? Why is your face downcast? If you do what is right, will you not be accepted? But if you do not do what is right, sin is crouching at the door, it desires to have you, but you must master it.'" - Genesis 4:5-7

Notice how the above passage reveals how God tried to reason with Cain. Not only that, but we also see how Cain would have none of it when it came to what the Lord had to say. So, out of envy and jealousy, Cain decides to lure his brother Abel into the fields. And once the two were found to be alone, Cain attacked and killed his brother.

Now God, the One who knows all, gave Cain a chance to be personally accountable for his vicious actions that had taken place against his brother Abel. And this is why we find God asking Cain: "Where is your brother Abel?" Now instead of Cain telling God the truth, he decides to lie to the Almighty. And on top of that, Cain displays his true feelings by getting snippy with God: "I don't know, am I my brother's keeper?"

And after hearing his reply, God reveals to Cain that He already knew where Abel was, and He knew of his whereabouts; because Abel's blood had already cried out to Him, from out of the ground: "And He said, 'What have you done? The voice of your brother's blood cries out to Me from the ground.'" - Genesis 4:10

Now understand that Cain was very prideful regarding the talents and skills that the Lord had given him. These talents and skills gave Cain the ability to successfully till and cultivate the ground. But because of the murderous actions he'd enacted upon his brother, God decides to take Cain away from the very place that would have allowed him to use those talents and skills he was so proud to have.

"So now you are cursed from the earth, which has opened its mouth to receive your brother's blood from your hand. When you till the ground, it shall no longer yield its strength to you. A fugitive and a vagabond you shall be on the earth." - Genesis 4:11,12

This Punishment Is More Than I Can Bear

After God had told Cain about his punishment, Cain responded by saying: "My punishment is more than I can bear. Today you are driving me from the land, and I will be hidden from your presence; I will be a restless wanderer on the earth, and whoever finds me will kill me." - Genesis 4:13,14

Now notice how the passage reveals that even at this point, from within his sinful life, Cain knew that being away from God wouldn't be a good place to be. Remember that his parents Adam and Eve were also cast out from a better place after disobeying God. But despite this, Adam and Eve still stayed humble, and unlike their first go around, they obeyed God. They continued their fellowship with the Lord.

Look, truth be told, there's a lot that Cain could have learned from his parents. For we find that although the blessings weren't as great for Adam and Eve as they once were when they were back in the Garden of Eden, the pair recognized that they were still being blessed by God, even though those blessings were now coming to them in smaller ways.

Now I'm basing my statement on the fact that Adam and Eve were still able to rule and subdue the land like the Lord had commanded them to do before they fell from grace. They were also able to have children, who would later on, overall, make significant contributions to humanity. So I believe that this would have been the case, for Cain as well, if he would have simply humbled himself and obeyed the Lord as his parents had done before him.

Nevertheless, in a small way, God shows Cain mercy. And the Lord does this by placing a mark upon his head. For whosoever decides to lay a hand on him, will suffer vengeance from the Lord, seven times over: "And the Lord said to him, 'Therefore, whoever kills Cain, vengeance shall be taken on him sevenfold.' And the Lord set a mark on Cain, lest anyone finding him should kill him." -- Genesis 4:15

So Cain left from out of the land, the land that the Lord had banished him from. And from this point forward, Cain decided to head eastward and settled in a place called Nod. This is the place where Cain married and started his own family. He also had built the first recorded city from within the Sacred Record, and he called this city Enoch. For the name that Cain had chosen for the city came from his firstborn son:

"And Cain knew his wife, and she conceived and bore Enoch. And he built a city, and called the name of the city, after the name of his son Enoch." -- Genesis 4:17

Note: This "Enoch" is not the prophet who would be known as the other Enoch, who, later on from within the Sacred Record, walked with God for 300 years.

In the following article, we'll move forward a bit, and this is where we'll find Adam and Eve giving birth to another son. And they will name this child Seth. It's also at this point; we'll begin to take a closer look when it comes to the family linage of Seth. And we'll keep following it until we come across a man that's named Enoch. This is the Enoch, who would later be known as the prophet that walked with God for 300 years.

May God blessings be upon you, and thank you for your support.