"Seven days from now I will send rain on the earth for forty days and forty nights, and I will wipe from the face of the earth every living creature I have made."


In the last article, we'd spent some time looking at the man that God had decided to use when it came to representing and preserving the human race. And even though humanity at this point, for the second time in its history, had fallen away from God. The human race was fortunate enough; Noah was able to find favor with the Lord. Thankfully through Noah, God was reminded that humanity was still worth saving.

Because of this favor that Noah had earned on our behalf, God would use this man to help usher the human race into the new natural world that was soon to come. This "new natural world" that I'm referring to - is a world that would come after the fallout of God's wrath had been completed. An event that would end up being known as the Great Flood of Judgement. 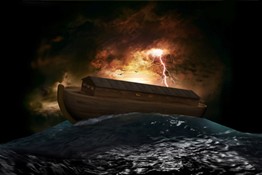 Nevertheless, we've now reached a point from within our journey, where we find that Noah had just finished building the Ark.

And it's at this point after Noah had finished the first task that the Lord had put before him.

The Sacred Record reveals that it would be at this time, God reminded the shipbuilder that He was about to unleash the Great Flood of Judgment upon the earth:

"And behold, I Myself am bringing floodwaters on the earth, to destroy from under heaven all flesh in which is the breath of life; everything that is on the earth shall die. But I will establish My covenant with you; and you shall go into the ark you, your sons, your wife, and your sons' wives with you." - Genesis 6:17,18

I want to point out something that God is speaking of when it comes to this passage. Understand that this part deals with the promise that God had made earlier to Noah. God possibly made this promise at some point when He was giving Noah the instructions for the Ark, and a little before this point from within God's written Word.

Taking Two Of Every Kind


However, after this, we learn that God had instructed Noah on his next task. These instructions involved Noah taking two of every kind and of every sort:

And after God had given Noah those instructions, we now find Him turning His attention, specifically towards the care of Noah and his family: "And you shall take for yourself of all food that is eaten, and you shall gather it to yourself; and it shall be food for you and for them. Thus Noah did; according to all that God commanded him, so he did." -- Genesis 6:21,22

Now it's at this time; the Sacred Record reveals that God tells Noah that He will send the Great Flood of Judgment in the next seven days - this meant that Noah had a better sense of when the Great flood was going to occur. Keep in mind that Noah had already completed so much when it came to the building of the Ark, but there was still more work that had to be done, and God told Noah that he had seven more days to do it in:

"Seven days from now I will send rain on the earth for forty days and forty nights, and I will wipe from the face of the earth every living creature I have made." - Genesis 7:4

Now let's take a quick look at the events that had happen during this seven-day window: First, we're told that God had sent to the Ark the specific type of animals that He wanted to be saved from this Great Flood of Judgment. In the meantime, Noah would settle his family into the Ark, and would place the animals that God had sent to their proper habitats from within the Ark:

Noah Was A Faithful Servant

Noah had done all of the things that God had commanded him to do. He was a man of great faith and demonstrated it by building the Ark, without seeing one rain cloud or thunderbolt in the sky. Noah settled his family and the animals into the Ark, and he did this without seeing any signs that a mighty storm was coming. And again, Noah did all that he did, through the faith and obedience he had towards the Lord.

Now, some seem to teach that Noah had to be some type of king, who'd perhaps, ordered thousands of men to build the Ark for him. I'm mentioning this because this is a popular viewpoint floating around, and I think you need to know about it. But also understand that I do not agree with this consensus. The only reason why I'm bringing it up deals with the idea that this is what some Bible scholars are now claiming.

Going Against the Experts

Now I hate to go against the experts, but there are a few reasons why I'm in disagreement with this point of view:

First: If Noah were a king of some sort, the Sacred Record would have recorded him as a king, like it has done for the rest of the individuals (who were royalty) from within its Sacred Passages.

Second: People seem to forget that 120 years had passed, from the time that God had given Noah the blueprints and from the time it took for him to finish the Ark. 120 years God gave him! Think about that for a moment...? Now I don't know how you feel when it comes to knowing that it took this long. But there's a lot one (along with his family) could do in the period of 120 years.

This is what God had to say when humanity had begun to fall away from Him for the second time: "And the Lord said, 'My Spirit shall not strive with man forever, for he is indeed flesh; yet his days shall be one hundred and twenty years.'" - Genesis 6:3

Third: Why would God allow thousands of laborers to perish in the Great Flood after they had been obedient to Noah when it came to the building of the Ark? This would not have happened; they would have been saved too.

Anyway, we now find the Sacred Record revealing that Noah was 600 years old when the Great Flood of Judgment had come upon the earth. If this is accurate, this event will be somewhere around 1,656 years from when God had created Adam. Just throwing a little bit more extra information at you :)

Nevertheless, the Sacred Record also reveals that this event had happened in the second month, of the seventeenth day, of that month, which meant that the second month would have been November during this period. However, if this was the case, it's important to know that Noah would have just completed his final harvest for that year.

Because of this timing, Noah would have had plenty of food that he could have loaded into the Ark, during this time. Now I don't know about you, but I find this little bit of information to be very convenient for Noah and his family. It goes to show you that when God does something, He goes all the way, never halfway.

Next, the Sacred Record informs us that the fountains of the great deep were broken up, and the floodgates of heaven had also opened up, and heavy rains started pouring heavy down upon the earth. Understand that the rain came so heavy and so fast, the clouds could not hold to the task they were created for - the Scriptures reveal that they were torn open and were completely dispersed by the force of the storms. It rained upon, not just part, but the entire earth without interruption.

Oh, how fatal these forty days and forty nights were. God had turned the waters that were once so useful and nourishing towards humanity - into a thunderous plague of punishment working against the human race.

The Scriptures reveal that the water levels continued to increase gradually, while in turn, lifting the Ark along with it. As the water levels rose, so did the Ark, while everything else perished, just like God had warned. The Sacred Record states that the waters rose so high that all of the mountains that were found under the heavens were covered by at least twenty feet of water.

Also, everything that had nostrils, and breathed, were wiped from the face of the earth. Nothing had survived outside of Noah and his family and the animals that had resided in the Ark; the Scriptures also inform us that it rained for forty days and forty nights. The earth stayed flooded, and the waters did not recede until after 150 days had passed.

Now that we've journeyed through this pivotal moment from within humanity's history. We'll move forward and learn exactly what tools (the raven and the dove) and steps Noah had to take, for him and his family, to be able to leave the Ark finally.