The Mighty Son of Cush

Nimrod would taunt God with his defiance and dared the Lord to do something about it, as he oppressed and tortured those who opposed him. Needless to say, this man had great pride.

In the last article, I went ahead and decided to do a page that took a look at what is normally reviewed as The Table of Nations. This is basically a chart that outlined the descendants that had came through Noah's three sons and their households: Shem, Ham, and Japheth. The chart shows how the human race would eventually be established through them, as humanity finds themselves embarking upon a new natural world. Nevertheless, as we begin to move forward from within our journey, perhaps it would be wise to do a page when it comes to the man that's known as Nimrod, the mighty son of Cush.

So let's go ahead and do that at this moment. When it comes to Nimrod, you have to keep in mind that he was the grandson of Canaan's father Ham and the great-grandson of Noah. Now the Scriptures points out that Nimrod had earned himself a great reputation: "He was a mighty hunter before the Lord; that is why it is said, 'Like Nimrod, a mighty hunter before the Lord.'" -- Genesis 10:9 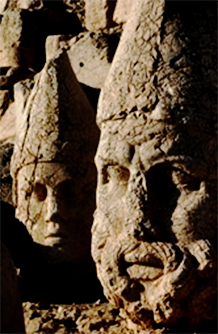 Understand, all of this was happening at a time when the beasts of the field were in great abundance. Humanity had not solidified itself from within the lands where the beasts roamed.

It was from within this type of dangerous environment that allowed Nimrod to make a name for himself.

This was happening while, in turn, allowing Nimrod to become a major contributor - when it came to keeping the wild beast from overwhelming his kingdom.

And because of this, Nimrod would eventually earn his great reputation, as he garnered respect amongst his people.

However, know that Nimrod was a different kind of man when compared to the other kingdom leaders.

Nimrod wasn't content with just running the tribe that he had before him; he was very ambitious, a man who wanted much more. These were the reasons why he started to build and surround himself with an elite fighting band of loyal men.

Also, keep in mind, Nimrod not only used these men to invade his neighbors, but he also used them when it came to executing judgment and punishment upon the innocent and to those who'd dared to oppose him. Understand that Nimrod had thought of himself as being a mighty prince, just like Alexander the Great and Caesar did, much later on, in the history of humankind.

In Spite of His Fame


Nimrod Was Just A Man

Now keep in mind that despite the fact, the Sacred Record had acknowledged him when it came to his great reputation. It didn't matter how many personal accomplishments Nimrod had achieved or how many kingdoms he would be able to conquer. Because when it came to God, Nimrod was just a man who had earned a reputation by being a mighty hunter amongst men.

And why not? Why should God acknowledge Nimrod to be something more? Nimrod did not do the things or lived in such a way that would please God. He did not follow the ways of the Lord while he was conquering and establishing his new kingdoms, governments, and self-worth.

And on to make matters worse, Nimrod would institute a pagan religion (possibly Baalism) from within these kingdoms that he had built and conquered. Just like Jeroboam (during his reign as Israel's first Northern king) would do at a much later date. Nimrod would begin to taunt God with his defiance. He did this by practically daring the Lord to do something about the mayhem - he was wreaking upon his fellowmen as he oppressed and tortured those who opposed him.

The Sacred Record points out that at the beginning of his reign, Nimrod named his first kingdom Babel. Now I believe that this information is essential to know. It would seem to shed a little bit more light - when it came to the events that were to take place sometime later.

If Nimrod Had Completed the Tower of Babel

This Would've Made Noah a False Prophet

There's something else you must know - if this was the case and if the Tower of Babel was allowed to be finished and stand for any amount of time. This would have certainly gone against Noah's prophecy that was spoken against Noah's son Ham and grandson Canaan:

Remember that Nimrod was a direct descendant of Ham and if the Tower of Babel's sole purpose was to place all nations under one ruler, under one government. These events would have made Noah a false prophet if this had happened, for Nimrod would have ruled over all of Noah's sons.

And it's for this reason alone; God would not have allowed this to happen. Also, keep in mind, Noah had cursed his grandson Canaan to be a servant of servants. This meant that Canaan could not rule over any of Noah's sons, it was Canaan and his sons that would serve his brothers, now and in future generations. Since Canaan was Ham's son as well, which Nimrod was a direct descendant of, he, too, would fall under this same curse that Canaan (which is Ham's entire household) was under as well.

This is why when Noah was blessing (or cursing) his sons - Ham's name was never explicitly mentioned. And the reason for this dealt with the fact that for whatever reason, it was Canaan that was seen as the representation of Ham's household from that point forward. So like I've stated many times before, whatever curse that was levied against Canaan - was levied against Ham's entire household as well:

"When Noah awoke from his wine and found out what his youngest [grand]son [Canaan] had done to him, he said, 'Cursed be Canaan! The lowest of slaves will he be to his brothers.' He also said, 'Blessed be the Lord, the God of Shem! May Canaan be the slave of Shem.' May God extend the territory of Japheth; may Japheth live in the tents of Shem, and may Canaan be his slave.'" - Genesis 9:24-27

And again, Nimrod was a direct descendant of Ham's household: "The sons of Ham: Cush, Mizraim, Put and Canaan. The sons of Cush: Seba, Havilah, Sabtah, Raamah and Sabteca. The sons of Raamah: Sheba and Dedan. Cush was the father of Nimrod, who grew to be a mighty warrior on the earth." - Genesis 10:6-8

Be that as it may. We must never forget that it will always reign in absolute Truth when it comes to God's Word! This is part of the reason why we would later learn that God had destroyed this Tower of Babel" before it was finished. Because of this, the languages of all the nations were confused, which caused all civilizations to become and remain divided from that point forward.

But to Nimrod's credit, he established four cities under his reign, which were called: Babel, Erech, Accad, and Calneh, and they were all located in what was known as The Land of Shinar. Soon after, Nimrod would head into Assyria, where we were also told that he'd built Nineveh and Rehoboth Ir, Calab, and Resen, which was located between Nineveh and Calah.

Now that we've journeyed through the recorded account of Nimrod, the mighty son of Cush. We'll begin to move forward by taking a closer look at possibly his master plan to enact his "collective agenda" upon humankind and the known world. Nimrod will try this through an infamous building structure that would be known as The Gateway to Heaven, or known to most The Tower of Babel.