"Everything that lives and moves will be food for you. Just as I gave you the green plants, I now give you everything."

In the last article we'd journeyed through the period in time that dealt with God remembering Noah, after the Lord had unleashed the Great Flood of Judgement upon humanity, which was a fatal flood that had lasted for forty days and nights. Soon after, we'd also learned how Noah started off using a raven, when it came to scouting the lands for dry ground. And when Noah didn't seemed satisfied with the results from the raven, we would later learn that Noah ends up turning this scouting tasks, over to the dove. Needless to say, Noah received much better results from the dove.

Nevertheless, not too long after this had happened, Noah and his family were finally given permission by God to leave the Ark. So Noah had left the Ark, and it's during this time, Noah would immediately build an altar unto the Most High God. Noah would use this altar, to offer up sacrifices to the Almighty.

Now shortly after Noah had done this, God makes a promise to humanity through Noah: "Never again will I curse the ground because of man, even though every inclination of his heart is evil from childhood. And never again will I destroy the living creatures, as I have done. As long as the earth endures, seed-time and harvest, cold and heat, summer and winter, day and night will never cease." -- Genesis 8:21,22 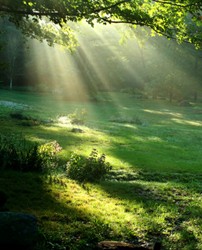 Keep in mind that this article will cover the continuation of this divine promise by God.

Nevertheless as we move forward, this is where we find God presenting to Noah, what I like to call His Magna Charta to humanity and all the earth.

Which is basically a set of rules that God expected all to follow.

Now let's begin by exploring this divine pledge a little bit further, by taking a closer look at what God had spoken unto Noah and the new world.

"Be fruitful and increase in number and fill the earth." -- Genesis 9:1

Now fortunately for us, God had placed a new world before humanity. God would remind the human race that this earth, was in fact, created for them. So the Lord reinstall what He had first told Adam and Eve: "Then God blessed them, and God said to them: 'Be fruitful and multiply; fill the earth and subdue it; have dominion over the fish of the sea, over the birds of the air, and over every living thing that moves on the earth.'" -- Genesis 1:28

"The fear and dread of you will fall upon all the beasts of the earth and all the birds of the air, upon every creature that moves along the ground, and upon all the fish of the sea; they are given into your hands." -- Genesis 9:2

Now it's at this point, God again, places humanity in the position, of being able to subdue, and rule over all the inferior creatures that inhabits the earth. But notice that there's a difference this time around, than before, when God had first placed humanity in this position.

Now when God had first given Adam this command. I want to point out, this order of power, when it came to humanity and the creatures of the earth, was done through love. For the Lord didn't mention fear, when He'd first given this command.

But this position of power that's now being mentioned by God; this time around, when it comes to the authority that humanity will now have over the creatures of the earth, will be established through fear. Notice how God makes this clear: "The fear and dread of you will fall upon all the beasts of the earth..."

God Gives Permission
to Eat the Meat of Animals

"Everything that lives and moves will be food for you. Just as I gave you the green plants, I now give you everything." -- Genesis 9:3

Also notice that it's at this point, we find for the first time, God gives humanity the permission to eat the meat of the animals. Notice that before the Great Flood had came, when God had first given Adam the command, keep in mind, the diet of the human race was limited only to the seed-bearing plants of the earth (fruits & herbs and possibly roots) : "I give you every seed-bearing plant on the face of the whole earth and every tree that has fruit with seed in it. They will be yours for food." -- Genesis 1:29

Now when you read this passage, be careful not to run (verse 29) into (verse 30) too quickly. For in (verse 30) God starts to give the beast, and the birds of the earth, their own menu of life. And if you read it too quickly, you could easily think that the first time around, God had included the beast and the birds for mankind to eat as well, during the recording of that particular account:

"And to all the beast of the earth and all the birds of the air and all the creatures that move on the ground, everything that has the breath of life in it - I give every green plant for food. And it was so." -- Genesis 1:30

So This Time Around

why the Change in Diet?

Now one could easily wonder, by putting forth the question: "Why did God all of a sudden, allow humanity the option of eating the meat of animals?"

And honestly, I must admit, this question is warranted, and unfortunately the Sacred Record does not say why. But if we were to be daring in our assessment of the diet change, we could possibly assume that the reasoning behind the change, would be that, the earth had just came out of a major flood that had lasted for forty days and nights. And it's very well possible that the Great Flood had severely damaged the earth's soil, which in turn, at least for the time being, hindered the earth's ground surface ability, to produce vegetation consistently during this time.

By God giving humanity the permission to eat the meat of animals, during this time, helped to insure that there would be more than enough food, for the human race to survive on, as the world was in the process of finishing the transition from the old to the new.

Murderers will Pay a Price

"But you must not eat meat that has its lifeblood still in it." -- Genesis 9:4

Understand that although God had allowed mankind the option of eating the flesh of animals. God did not want the animals to be tortured, or left to suffer, when they were being killed. Even though the human-being is the highlight of God's creation, the Lord still has tremendous love for all that He has created, including the animals.

Here we find God making the vow that all murderers will be dealt with, either in this life or the next. Understand that murderers will pay a hefty price, for the taking of innocent life.

But God wouldn’t be done, for He continues. And it’s during this time we find the Lord laying out, what would be known as the Rainbow Covenant, or as some scholars would like to say, the Noahic Covenant. Now just like all of God’s covenants that are found from throughout the Word of God, this is God basically making a promise to humanity. Notice how I said to “humanity” -- being that there are covenants that God had made that were more specific, when it comes to a certain group of people. For example, here's a few:

The Abrahamic Covenant dealt specifically with Abraham and his descendants, eventually including the nation of Israel.

The Mosaic Covenant which dealt with Israel and the Ten Commandments; along with the 600 or so commands that dealt with the rest of the laws that Israel as a nation, would have to follow.

Nevertheless, here's God laying out the Rainbow Covenant to Noah:

"This is the sign of the covenant I am making between me and you and every living creature with you, a covenant for all generations to come: I have set my rainbow in the clouds, and it will be the sign of the covenant between me and the earth. Whenever I bring clouds over the earth and the rainbow appears in the clouds, I will remember you and all living creatures of every kind.

"Never again will the waters become a flood to destroy all life. Whenever the rainbow appears in the clouds I will see it and remember the everlasting covenant between God and all living creatures of every kind on the earth. This is the sign of the covenant I have established between me and all life on the earth." -- Genesis 8:12-16

So we've taken a good look at what I'd like to call God's Magna Charta. This is what God had spoken to humanity and the new natural world, after the Great Flood of Judgement had ran its course upon the earth's surface. Be that as it may, in the next article, we will continue our journey, by looking at the introduction tat deals with Noah's three sons Shem, Ham and Japheth, and his grandson Canaan.