Page Eighty-Three
Pharaoh
The Dark Dreams of a King


And while [the magicians and sages] stood before him, Pharaoh would tell them about his dreams. But with all of their perceived combine reasoning, good judgment and foresight, none of them could interpret Pharaoh's dark dreams for him.


In the last article we'd learned, that on one particular night, the King's Prison newest prisoners (the cupbearer and the chief baker) both had some disturbing dreams. Know that their dreams had caused them so much distressed, that Joseph was immediately able to tell that something had terribly worried them. So he'd asked them: "Why are your faces so sad today?" 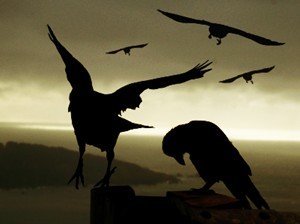 And it's at this point, that they'd both responded by saying: "We both had dreams, but there is no one to interpret them."

And after hearing this, Joseph responded by saying: "Do not interpretations belong to God? Tell me your dreams."

So the cupbearer and the chief baker would both, tell Joseph their dreams.

And it's at this point that Joseph would interpret their dreams, and rest assured, Joseph's dream interpretations did come true for both the cupbearer and the chief baker. For we would find, that when it had came to the cupbearer -- Joseph had foretold, how he would live to see his position restored from within the royal courts:

"[Cupbearer] this is what [your dream] means; the three branches are three days. Within three days Pharaoh will lift up your head and restore you to your position and you will put Pharaoh's cup in his hand, just as you used to do when you were his cupbearer." -- Genesis 40:12,13

But when it came to the chief baker, know that his interpretation wouldn't go so great? for the Sacred Record informs us, that Joseph had told the chief baker -- that after three days had passed, that he would not live to see another day from that day forward:

"[Chief baker] this is what [your dream] means: The three baskets are three days. Within three days Pharaoh will lift off your head and hang you on a tree. And the birds will eat away your flesh." -- Genesis 40:18,19


However that may have been, Joseph had to continue on, when it came to serving out his own prison term requirements -- regardless of what happened to the cupbearer or the chief baker.

I mean after all, I like to think, that Joseph had momentarily fallen into the trap of placing his hope and trust into man (instead of God). For Joseph had made the mistake of believing, that the cupbearer would remember him after he had been released from prison, and restored back to his official position from within the Egyptian royal courts:

"But when all goes well with you [cupbearer], remember me [Joseph] and show me kindness; mention me to Pharaoh and get me out of this prison. For I was forcibly carried off from the land of the Hebrews, and even here I have done nothing to deserve being put in a dungeon." -- Genesis 40:14,15

Nonetheless, in spite of his request, unfortunately for Joseph -- the Scared Record would reveal that two full years had passed by, after the cupbearer had been released from his prison sentence, and still to that day, Joseph heard no word from the cupbearer or Pharaoh.


Now as we move forward, we've now reached the point from within this Sacred Account -- where we're told, that on one particular night, Pharaoh had two disturbing dreams:

"Pharaoh had a dream: He was standing by the Nile, when out of the river there came up seven cows, sleek and fat, and they grazed among the reeds. After them, seven other cows, ugly and gaunt, came up out of the Nile and stood beside those on the riverbank. And the cows that were ugly and gaunt ate up the seven sleek, fat cows. Then Pharaoh woke up.

"He fell asleep again and had a second dream: Seven heads of grain, healthy and good, were growing on a single stalk. After them, seven other heads of grain spouted thin and scorched by the east wind. The thin heads of grain swallowed up the seven healthy, full heads. Then Pharaoh woke up; it had been a dream." -- Genesis 41:1-7


Understand that these disturbing dreams that Pharaoh had just experienced, had caused his mind to be troubled. And it's for this reason, that the Egyptian ruler would send for all the magicians and sages that could be found from within the Egyptian lands. And once they were gathered, the magicians and sages would come before Pharaoh. And while they stood before him, Pharaoh would tell them about his dreams. But with all of their perceived combine reasoning, good judgment and foresight, none of them could interpret Pharaoh's dark dreams for him.

And it would be at this moment, that the cupbearer would finally remember Joseph as he began to tell his story to Pharaoh:

"Today I am reminded of my shortcomings. Pharaoh was once angry with his servants and he imprisoned me and the chief baker in the house of the captain of the guard. Each of us had a dream the same night, and each dream had a meaning of its own. Now a young Hebrew was there with us, a servant of Potiphar. We told him our dreams, and he interpreted them for us, giving each man the interpretation of his dream. And things turned out exactly as he interpreted them to us: I was restored to my position, and the other man was hanged." -- Genesis 41:9-13


Going Beyond the Surface of the Sacred Text?


Now at first glance, some would say that the cupbearer did after all remember Joseph. And if we were to look at this record strictly from the surface, you would have assumed right. But let's go deeper... because when one takes a closer look, we'll find, that two full years had passed before the cupbearer spoke to Pharaoh about Joseph. Think about that for a moment? How would you feel, if it took someone over two years to do something (or a task) for you? Something, that would have only taken a brief moment to complete?

Now let's considered something for a moment? Notice when the cupbearer was first released from his prison sentence, would it be too farfetched, to see how the only thing on the cupbearer's mind at that particular moment, dealt with experiencing some type of liberating happiness? I mean after all, he had just been released from prison and a possible death sentence. Remember that the possibility of a death sentence, comes from the cupbearer learning from Joseph -- that he would avoid being put to death behind his alleged crimes.

And on top of this, remember what happened to the chief baker: "This is what it means: The three baskets are three days. Within three days Pharaoh will lift off your head [chief baker] and hang you on a tree. And the birds will eat away your flesh." -- Genesis 40:18,19


Now let's look at this from a different angle? What if the cupbearer would have remembered Joseph -- close to the time that he was freed prison? And let's also say, that he had spoken to Pharaoh about Joseph soon after he was released? I wonder... What type of value would have Joseph brought to the Egyptian ruler at that moment?

Understand that Pharaoh didn't at this time, have any dreams that needed an interpretation, and on top of that -- Joseph was a foreigner to the land, and a slave that alleging disrespected the wife and household of one of Pharaoh's top officials. Now honestly, what kind of value would that have been to Pharaoh -- that would have caused him to release Joseph?


Learning To Wait On God?


And actually, if the cupbearer would have spoken to Pharaoh about Joseph -- around the time that he had been freed, there would have been a very slim chance that Pharaoh would have released Joseph and made him a free man. And again on the other hand, what if Pharaoh had released Joseph -- then what? Perhaps Joseph would have headed back home, and once again, took his rightful position of being Jacob's favorite son.

And although this may have been honorable, know that God had much bigger plans for Joseph and so therefore delayed his release. For this record teaches us, that we must learn to trust God completely, while being steadfast in our faith (especially when things seem so chaotic) to wait on Him. For you never know what God has in store for you. We should always keep in mind, that when it comes to those who wait patiently on the Lord -- will in fact, be paid well for their waiting, not only in principal but in interest.

Now don't make the mistake of thinking, that I'm referring to things in a monetary sense, when I talk about one receiving some type of increase in their life? For I want you to know, that we can also be added unto, when it comes to things like: spiritual growth, understanding, knowledge, wisdom, insight and discernment. Yeah I know... this might not seem like a lot to most people -- but you'll be surprised, at what you can achieve, when you really have some clarity in your overall vision (or set goals) -- when it comes to the things that you set out to accomplish in life.

Always remember, that whenever you stand for God and suffer because of it, it's never for naught. For I hold the notion, that it's God's way of continuing to craft and mold you, when it comes to your true purpose: "My brethren, count it all joy when you fall into various trials, knowing that the testing of your faith produces patience. But let patience have its perfect work, that you may be perfect and complete, lacking nothing." -- James 1:2-4

As we just learned, the cupbearer finally remembers Joseph. However, will Pharaoh send for Joseph? Will the Egyptian ruler give Joseph the chance to do, what his magicians and wise men couldn't? And if Joseph can help Pharaoh with his dream dilemma, what reward, if any -- will Joseph receive?


67) The Descendants of Esau