"Zebulun shall dwell by the haven of the sea; He shall become a haven for ships..." -- "Issachar is a strong donkey, lying down between two burdens..." -- "Dan shall judge his people as one of the tribes of Israel..."

In the last article, we'd finished wrapping up the prophecy that Jacob had spoken over the tribe of Judah. Also from within that article, I'd also pointed out, that Jesus [Yeshua] Christ had eventually fulfill this part of Jacob's prophecy: "Binding his donkey to the vine, and his donkey's colt to the choice vine, He washed his garments in wine, and his clothes in the blood of grapes. His eyes are darker than wine, and his teeth whiter than milk." -- Genesis 49:11,12 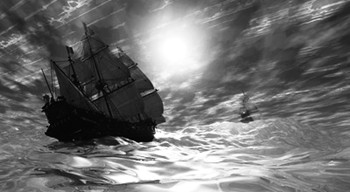 Now Here's the record that deals with that fulfillment:

"They brought the donkey and the colt, laid their clothes on them, and set Him [Jesus] on them.

"While others cut down branches from the trees and spread them on the road. Then the multitudes who went before and those who followed cried out, saying: 'Hosanna to the Son of David! Blessed is He who comes in the name of the Lord! Hosanna in the highest!' And when He had come into Jerusalem, all the city was moved, saying, 'Who is this?' So the multitudes said, 'This is Jesus, the prophet from Nazareth of Galilee.'" -- Matthew 21:7-11

However that may have been, let's move forward...


Now it's at this time from within our journey, I would like to take a quick look at some of the other prophecies, that Jacob had spoken over his other sons. For I personally believe, it's the fulfilled prophecies, that confirms the Sacred Record's divine authority. Which is a divine authority that no other book can lay claim to. For we must not forget, that it's the Spirit of the Most High, that gives the servant of God the prophecy to begin with.

And with this being stated, I'd also like to point out, that the Sacred Record has been constantly validated, and proven to be extremely reliable through many forms of ancient texts and archeology findings. Findings that helps to confirm the places, dates and civilizations that are recorded throughout its Sacred Covers.

I also want to point out, that even though these types of credible resources are great to have -- I want you to know, that it's the telling of the recorded prophecies, and the fulfillment of them; that actually lends credence, and support, for the divine authority claim -- a claim that's constantly trumpeted throughout God's Sacred Record.


However, let's move forward a bit more, by taking a look at Jacob's prophecy, when it comes to his son Zebulun: "Zebulun shall dwell by the haven of the sea; He shall become a haven for ships, and his border shall adjoin Sidon [Zidon]." -- Genesis 49:13

"The third lot came out for the children of Zebulun according to their families, and the border of their inheritance was as far as Sarid. Their border went toward the west and to Maralah, went to Dabbasheth, and extended along the brook that is east of Jokneam." -- Joshua 19:10,11


However, we move forward some more... for we now find the record of Jacob's prophecy, when it comes to his son Issachar: "Issachar is a strong donkey, lying down between two burdens; he saw that rest was good, and that the land was pleasant; He bowed his shoulder to bear a burden, and became a band of slaves." -- Genesis 49:14,15

Understand that this prophecy basically states, that the tribe of Issachar would eventually become a tribe, that was found to be: industrious, strong, and laborious. I also want to point out, that the tribe of Issachar, would also be found as being specialist -- specialist when it came to husbandry (cultivating the land) as well as being patient -- patience that deals with the ability to bear their burdens. I'd like to think, that this "enduring patience" is where their comparisons to being a "strong donkey" comes in at.


The Tribe of Issachar - Something to Keep in Mind?


Be that as it may -- I would like to take this moment, to point out, that most Bible translations have a similar translation, when it comes to the latter part of Jacob's prophecy:

"He bowed his shoulder to bear a burden, and became a band
of slaves." -- NKJV

"He will bend his shoulder to the task and submit to forced
labor." -- NLT

"He bowed his shoulder to bear burdens, And became a slave
at forced labor." -- NASB

"He will bend his shoulder to the burden and submit to
forced labour." -- NIV


But I also want to point out, that when it comes to the King James translation -- understand that the latter part of Jacob's prophecy is translated as such: "And bowed his shoulder to bear and became a servant unto tribute." -- KJV


Why Does this Matter?


Now I'm bringing this to your attention, for I find that this little bit of information to be of some importance. For we find that the King James translation, specifies exactly what the tribe of Issachar were to be a slave to. Instead of simply making a vague reference, to just being a "slave". Now if we were to take the King James translation over the rest -- the translation will allow us to see a much clearer picture, on how this prophecy will be exactly fulfilled.

For it clearly states, that the tribe of Issachar, would be called upon to pay tribute, while they also bear the burden, of paying taxes and rent. Now this is a condition that would continue on, regardless if benefited neighboring tribes, or the foreign powers that may be imposing such a requirement on them at that time.

Now perhaps, the tribe of Issachar had been yoked with this financial burden, since they were found to have had, sixteen very prosperous cities that they'd controlled from within their lot, that was given unto them. Understand that I'm pointing all of this out, so we don't make the mistake of looking at this prophecy, as being some type of curse, that had been be laid upon them. For I want you to know, that the tribe of Issachar would do just fine, in spite of them being a slave, to their so-called "financial burden."


Be that as it may, let's move forward... for we now come across the record, that deals with Jacob's prophecy concerning his son Dan: "Dan shall judge his people as one of the tribes of Israel. Dan shall be a serpent by the way, a viper by the path, that bites the horse's heels So that its rider shall fall backward." -- Genesis 49:16,17

Now I'd like to think, that this particular prophecy, proves to be very interesting...? For I want to remind you, that Dan was the first mentioned son, that had came from one of the handmaidens who was known as Bilhah. Also remember, that Bilhah would eventually marry Jacob -- which was a marriage that was allowed to happen, so she could simply bear him children.

Nonetheless, I want you to understand -- that this prophecy seems to suggest, that the tribe of Dan would be in a somewhat authoritative position, when it came to the judging of the Israel tribes.


The Foretelling of Samson - Perhaps?


Now the reason why I find this prophecy to be interesting... deals with the notion, that the prophecy is geared more towards the telling, of the coming of Samson the Israel judge. For this would be a judge, that would end up judging Israel for 20 years. Now I also want to point out, that not only was Samson a "Nazarite unto God" -- but that he was also, from the tribe of Dan.

I also want to point out, that even though Samson was known for his mighty strength -- he was also found, to be very witty and sneaky. And it's for this reason, that I hold true to the notion, that this part of Jacob's prophecy, could very well point towards those specific traits of Samson: "Dan shall be a serpent by the way, a viper by the path, that bites the horse's heels, so that its rider shall fall backward."

Now a clear example of these traits, are shown -- when Samson had killed 3000 Philistines from within their own temple, when he'd pulled the temple down from up under them. Know that because of Samson's cunningness and smarts -- he was able to do this, in spite of the fact, that at this point in his life, he was blind at the time.

For I want you to understand, that he needed his cunningness, in order to trick the young man (the one who was leading him around) into positioning him against the temple pillars. And it would be these pillars, that Samson would destroy, in order to bring the temple down around him.

Now we begin to move forward by exploring the prophecies of Jacob's next three sons: Gad, Asher and Naphtali. We'll take a close look at their prophecies as well, while we learn, how they were eventually fulfilled.