Joseph would quickly exit the room, for he didn't want them to see him weep. So instead, he went into his private room and wept there. Afterwards Joseph would wash his face and got control of his emotions and came out unto his brothers once again, saying: "Serve the food."


In the last article the Sacred Record revealed how Jacob's sons were having a hard time, when it came to figuring out the new attitude that Joseph (for he was still at this point unrecognizable to them) was displaying towards them, after they had followed Joseph's demands, by coming back to Egypt with their youngest brother Benjamin. 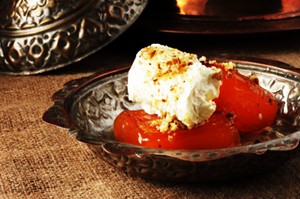 For it would seem in their eyes, that Joseph had done a complete 180 -- when it came to his treatment of them.

For they had noticed, that he was no longer being mean-spirited, but instead, he was very hospitable towards them.

Make no mistake, this new attitude that Joseph was displaying, was totally unexpected.

Actually, it was so unexpected, that Jacob's sons had became very leery, and afraid of what Joseph's true intentions may be, when it came to them.

Nonetheless, as we move forward...


The Sacred Record reveals that Joseph's new attitude would include him inviting his brothers to dinner, and not only did he do this, but he invited them to have dinner at his personal residence. And this is why he had instructed his chief steward, to take his brothers to his house, in order to get them situated.

Now in the meantime, Joseph would arrive sometime later in the day. And when he'd finally arrived home, his brothers immediately presented him with the many gifts that their father had given them to bring. And after presenting Joseph with the gifts, they would honor their brother by bowing down before him.

And after they had done this, in return, Joseph asked them: "How is everybody, is all well? And what about your aged father you told me about: is he still living?"  His brothers would reply by saying: "Your servant our father is still alive and well." And once again, after they'd heard this, they'd bowed low before him, in order to show him honor and respect.


And while they were bowing before him, Joseph looked around the room, and it was at this moment that he laid eyes on his little brother Benjamin. And being that he was still unrecognizable to his brothers, after seeing Benjamin -- Joseph said: "Is this your youngest brother, the one you told me about? May God be gracious to you, my son."

And after Joseph had said these things, he'd once again, became deeply moved at the sight of Benjamin. And after this had happened, Joseph would quickly exit the room, for he didn't want his brothers to see him weep. So what he did instead... he went into his private room and wept there. And afterwards, Joseph would calm his emotions and wash his face. After doing this, once again, he came out before his brothers, and it was at that moment, that he told his servants: "Serve the food."

Now the Sacred Record also reveals, that the reason why they were separated into these three groups, dealt with the fact, that the Egyptians thought it was detestable to sit, and eat with Hebrews. Now perhaps, this is also why, Joseph was eating by himself as well -- being that he too, was a Hebrew:


Clues? Some Easily Missed -- Some Not so Easily?


Now often times, most preachers like to criticize and belittle   Joseph's brothers, for not being able to pick up on some of the clues, that would have revealed Joseph's true identity to them. But if one were to be fair, I personally believe that these clues could have been easily missed by anyone else, who were found to have been in their situation.

For example, the clue that dealt with Joseph eating by himself? This clue could've been seen as something common to a foreigner, For one could have easily thought, that a person in Joseph's position, would have normally ate by themselves, and away from the help. What would have been easily seen as being custom... would probably be expected, instead of being seen as strange.

However... there was another clue that could've revealed Joseph's true identity? A clue that shouldn't have been so easily missed? And this clue dealt with Joseph having his brothers seated in the order of their ages, from the firstborn to the youngest. This is why at times, I ponder the notion, that maybe Joseph was trying to secretly let his brothers know who he really was.

And although his brothers had looked at each other with astonishment, when they'd saw how they were seated, they still weren't able to put two-and-two together, when it came to Joseph's true identity: "The men had been seated before him in the order of their ages, from the firstborn to the youngest; and they looked at each other in astonishment." -- Genesis 43:33


All of Joseph's Brothers - Allowed to Leave?

Nonetheless, as we move forward...


We find that Joseph had the food served... and it would be at this time, that something else interesting would occur, for we would find that Joseph had Benjamin's food portion... five times more, than the rest of his brothers. But once again, Jacob's sons didn't have a clue on what this meant. But needless-to-say, they feasted and drank freely, as they enjoyed themselves for that evening.


Joseph would take his chief steward to the side, and he had done this, in order to give him some new instructions, when it came to his brothers: "Fill the men's sacks with as much food as they can carry, and put each man's sliver in the mouth of his sack. Then put my cup the sliver one, in the mouth of the youngest one's sack, along with the sliver for his grain." -- Genesis 44:1,2


And of course, Joseph's chief steward would do as he was told. And as morning dawned, all of Jacob's sons (including Benjamin) were allowed to leave, and they were sent on their way, with their donkeys and supplies. Now keep in mind, that they hadn't gone too far from the city, when Joseph had said to his chief steward: "Go after those men at once, and when you catch up with them, say to them: 'Why have you repaid good with evil? Isn't this the cup my master drinks from and also uses for divination? This is a wicked thing you have done.'" -- Genesis 44:4,5

So once again, the chief steward would do as he was told, and he took some men with him, as he rode out to catch up with Jacob's sons. Now once the chief steward had caught up with them, he repeated the words that Joseph had told him to say. But after hearing these false allegations, Jacob's sons responded by saying:

"Why does my lord say such things? Far be it from your servants to do anything like that! We even brought back to you from the land of Canaan the sliver we had found from within the mouths of our sacks. So why would we steal sliver and gold from your master's house? If any of your servants are found to have it; he would die; and the rest of us will become my lord's slaves." -- Genesis 44:7-9


And after hearing this the chief steward replied: "Very well, then, let it be as you say. Whoever is found to have it will become my slave; the rest of you will be free from blame." So Jacob's sons immediately began lowering their sacks to the ground, and they'd opened them, so the chief steward could inspect them. So the chief steward would begin with the oldest brother, as he began to search all their sacks.

Now it wasn't until he'd searched Benjamin's sack, that Joseph's missing cup was found. Now when the rest of the brothers had seen that Benjamin had the cup, they were surprised, and needless-to-say... regrettably worried. And they'd displayed these emotions, by tearing their clothes. And shortly after, they would all load their donkeys, and ride back to Egypt with the chief steward.


Now when they'd arrived at Egypt -- the chief steward took them straight to Joseph's house. And of course, Joseph was still there when his brothers had entered. Now when they'd saw Joseph... they immediately threw themselves towards the ground before him. And after they had done this, Joseph exclaimed: "What is this you have done? Don't you know that a man like me can find things out by divination?"

Now Judah responded by saying: "What can we say to my lord? What can we say? How can we prove our innocence? God has uncovered your servants' guilt. We are now my lord's slaves: we ourselves and the one who was found to have the cup."

Now notice, how Judah would also add the condition: "and the one who was found to have the cup." Know that Judah had done this, because he knew, that while they were headed back to Canaan... and after the chief servant had stopped them, and accused them of deception and thievery, the brothers had responded to these accusations, by saying: "If any of your servants are found to have it; he would die."

Now obviously, they don't won't Benjamin to be killed -- so Judah tries to get Joseph to agree with the statement, that he'd just made instead: "We are now my lord's slaves: we ourselves <b>and the one</b> who was found to have the cup." For they would rather have Benjamin become a slave of servitude, instead of being put to death for thievery.

But will it be so easy for Judah to get Joseph to agree, and accept his statement, as the new terms for their punishment? Or will Joseph put Benjamin to death? Or does all of this plays into Joseph's true overall agenda, when it comes to Benjamin? And what about the rest of his brothers, what will Joseph do? will he finally enact revenge, by making them his slaves as well?