Joseph's brothers are now bowing down, in front of the very one they'd sought to destroy -- their brother who is now known as: The Prime Minister of the Egyptian State -- Zaphenath-Paneah the Revealer of Secrets.


Have you ever watched a movie, that showed you how a story was unfolding in two different locations at the same time? For example, you'll be watching the movie and all of a sudden, the movie switches to a split screen. This is done, in order to show you what's happening from within the movie's complete storyline -- even though the story is currently happening, from within two different places at the same time. 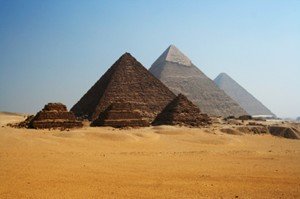 I like to call this process "The Parallel Story Effect." And its from within this "parallel effect" -- that things begin to come into a clearer focus, as one reaches a certain point of the story.

I like to think, that this is what's happening, when it comes to this part of the Sacred Account that deals with the rise of Joseph.

And it's for this reason, the Sacred Record begins to take us away from Joseph for the moment -- and it turns our attention towards the land of Canaan. For it begins to show us, what's exactly happening at the very same moment from within Joseph's father's house -- the household of Jacob.

Now it would also be at this time, that the Sacred Record would reveal to us, that the "famine of seven years" had struck wide and far -- for it wasn't just Egypt that would be affected: "So all countries came to Joseph in Egypt to buy grain , because the famine was severe in all lands." - Genesis 41:57

And although there had been many famines before this one, understand that the world hadn't experienced a famine like this particular one before. And to make matters worse for Joseph's father Jacob -- Joseph's brothers seemed to be clueless, when it came to trying to find a solution that would help them to survive this seven year famine.


But fortunately for Jacob... word would eventually reach him, letting him know that there was grain in Egypt. And after finding this out, Jacob tells his sons: "Why do you keep looking at each other? I have heard that there is grain in Egypt. Go down there and buy some for us, so that we may live and not die." -- Genesis 42:1,2


The World Turns To Egypt for Help?


And after hearing what their father had to say, all ten of Jacob's sons left, and headed off to go and buy grain from the land of Egypt.

Note: Benjamin who was the youngest, wasn't allowed to journey with his brothers, since Jacob had feared for his safety. Just the mere fact that they were going to be traveling through foreign lands, and with the food being as scarce as it was, would've caused their journey to be quite dangerous and volatile... since there was an increase in crime and violence, due to the lack of food and water in the nearby lands: "But Jacob did not send Benjamin, Joseph's brother, with the others, because he was afraid that harm might come to him." -- Genesis 42:4

However that may have been, as some time had passed -- we now find, that Joseph's record comes back together again (for the screen is no longer split.) For it's at this time, that the Holy Scriptures has now informed us, that Joseph's brothers had finally arrived at Egypt looking to buy grain.

And soon after their arrival, they would find themselves bowing face down in front of Joseph -- the brother they had betrayed some twenty years before: "Now Joseph was the governor of the land, the one who sold grain to all its people. So when Joseph's brothers arrived, they bowed down to him with their faces to the ground." -- Genesis 42:6

But they didn't know, that they were bowing down before the very man that they had betrayed some twenty years before, for they didn't recognize him -- this man who was now selling the grain to the people, and governing the land of Egypt.


Now personally, I find this moment from within Joseph's record to be very interesting...? Let's take a quick moment to look at something? Understand that we have to make sure that we pay close attention to what's happening -- for if we don't, we could easily think that up to this point, all of Joseph's dream interpretations had already come to pass. For it would seem as if they had, but it wasn't until this moment from within the Sacred Account -- that we could have truly said, that everything that Joseph had interpreted had actually come to pass.

Keep in mind, that back when Joseph was a teenager around the age of fifteen or sixteen, he had interpreted his own dream. And it was because of this "dream interpretation" (along with his very close relationship with his father Jacob) Joseph's brothers had become very envious and ill willed towards him. And because of this, a cycle of events went into effect, that would have seemed in the beginning, to have went against Joseph.

Remember what Joseph told his brothers, some twenty years earlier: "Listen to this dream I had: We were binding sheaves (bundles) of grain out in the field when suddenly my sheaf rose and stood upright, while your sheaves gathered around mine and bowed down to it. His brothers said to him, 'Do you intend to reign over us? Will you actually rule us?' And they hated him all the more because of his dream and what he had said." -- Genesis 37:6-8


A Little Over Twenty Years Later?


Nonetheless, Joseph is now thirty seven years of age, and again, it has been a little over twenty years since he had told this "dream interpretation" to his brothers. Now we're presented with a moment, where we can truly say, that all that Joseph had interpreted up to this point in his life -- has now been fulfilled.

For the Holy Scriptures have informed us, that Joseph's brothers are now bowing down, in front of the very one they sought to destroy... their brother who is now known as: The Prime Minister of the Egyptian State -- Zaphenath-Paneah the Revealer of Secrets:

"Now Joseph was governor over the land; and it was he who sold to all the people of the land. And Joseph's brothers came and bowed down before him with their faces to the earth." -- Genesis 42:6

Like I stated earlier, this is a very interesting moment, and I must admit, a true test for Joseph. After all, what will he do -- now that he has his brothers, who'd betrayed and sold him into slavery some twenty years before... now bowing down before him? And you know what? I'm curious... What would you have done, if you had the very person (or group of people) who'd tried to destroy you -- now before you, in dire straits asking you for help? You know, I feel another wisdom lesson that we all can benefit from, coming together here.